Part of the Camlough Road from the Egyptian arch roundabout to Monaghan Street in Newry was sealed off on Thursday afternoon following a bomb alert. British Army bomb experts were called to examine a suspect device in what is believed to be the old graveyard area close to Daisy Hill hospital. Traffic was diverted but access to the hospital was not affected. A PSNI helicopter also examined the scene. A controlled explosion was carried out on the package and it was declared to be a hoax. One policeman was slightly injured when petrol bombs and bricks were thrown at the PSNI. Sinn Féin and the SDLP condemned the incidents. SDLP Newry and Armagh MLA Dominic Bradley said the hoax alert which had disrupted the community yet again was deplorable.He said it was compounded by the disgusting acts of those who attacked police with bricks, stones and petrol bombs, endangering lives and adding to the pressure they were under as they attempted to protect the community. He said it was particularly galling that all this took place close to Daisy Hill Hospital and on a route which would affect the city centre, disrupting commuters and, most worryingly, those trying to get to a place of treatment. Events like these do nothing to further any cause and are to the detriment of everyone, he added. The Mayor of Newry Sinn Féin’s Charlie Casey, told BBC Radio Ulster he believed the violence against the police was “opportunistic” and unconnected to the hoax. He added that the incident was the second or third security alert in the area in recent months. “If some of those rioters, or the people responsible for the hoax, had relatives who necessitated going to Daisy Hill by ambulance in an emergency, what were they to do?” he asked. 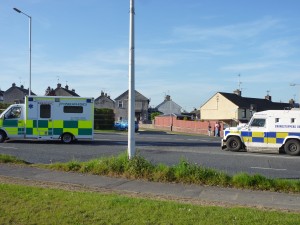