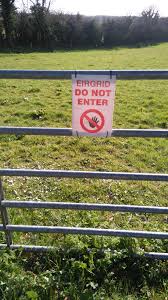 Notice on gate at entrance to farmland in Co. Meath along the route of proposed interconnector. Pic. © Michael Fisher

Anti-pylon campaigners representing landowners from Meath and part of Co. Monaghan are taking part in a court case in Dublin this week aimed at overturning the planning approval for the North-South electricity interconnector. An Bord Pleanála granted approval last December for the major infrastructure project involving almost 300 pylons and overhead high voltage wires running across countryside from the border at Lemgare, near Clontibret in Co.Monaghan, to a sub station at Woodland, near Batterstown in Co. Meath. EirGrid has said the overall cost of construction will be €286 million, €180m for the proposed development in the Republic and the balance for the shorter SONI section in Co. Armagh leading to a sub station at Turleenan near the Moy, Co. Tyrone.

In February the North East Pylon Pressure Campaign, which has led the opposition amongst landowners and residents to the 400kV overhead line since it was first proposed eight years ago, was granted leave to apply for a judicial review of the Bord Pleanála decision. The case is also in the name of Maura Sheehy, a farmer, of Teltown Road, Donaghpatrick, Co Meath, one of the hundreds of objectors who attended the lengthy public enquiry held in Carrickmacross last year.

As well as challenging An Bord Pleanála, the case is also against the Minister for Communications, Energy and Natural Resources; and the State. The developer, EirGrid, is a notice party. Nigel Hillis of the County Monaghan Anti Pylon Committee was among the interested observers at the Commercial Court on Tuesday when the hearing opened in front of Mr Justice Max Barrett. 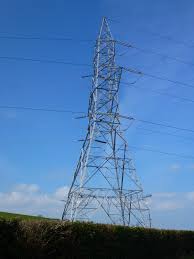 The court was told that in approving the development, An Bord Pleanála had failed to take into account the potential impact of the UK planning to leave the European Union. A lawyer for the applicants, Conleth Bradley SC, said the grounds of challenge included a failure by the Board to address properly the rights of the affected landowners as well as environmental issues and the implications of Brexit.

The judge will later hear two separate but similar challenges over the permission granted for the interconnector. They are being brought by David Malone, of Eurolaw Environmental Consultants, St Joseph’s Terrace, Portarlington, Co Laois, and Val Martin, a farmer and environmental campaigner of Gortnakesh, Co. Cavan. The case continues.