It seems strange writing about my mother and wishing her a very Happy 100th Birthday without being present in the family home in South Dublin where she has lived since 1968. But the coronavirus emergency means everyone staying at home and keeping in contact via video conferencing and other means. Thanks to my brother John we were able to share the birthday party and see the cards, cake and of course the letter from the President.

Margaret Mary Elizabeth Smyth was born at the family home at Conabury, Castleblayney, Co. Monaghan (Big Tom country) on 31st March 1920. Her parents (my grandparents) were John F. Smyth, solicitor, and Elizabeth Smyth (née McCann from Aughnacloy) who was a nurse at the original St Vincent’s hospital in Dublin.

Mum was the third of nine children, four of them boys of whom two were priests, Fr Harry Smyth CM and Fr Reggie Smyth SPS. Both of the served on the missions, including Nigeria. The only surviving sibling is the youngest daughter, Sr Nora Smyth RSCJ, a Sacred Heart nun in Armagh. My mother attended the convent there as a boarder. Thank you to all the SH sisters who sent cards to Mum and remembered her in their prayers.

The memorial at Poperinge contains details of some of the English soldiers from the World War One conflict who were shot at dawn, in addition to Eric Poole.

Corporal Ernie Carter was like myself a Dubliner who lived in Tydavnet. He was one of the original members of the 29th Infantry Battalion Association in Monaghan.

One of the wreaths from the 29th Infantry Battalion Association

One of his tasks as Secretary of the Association was to help organise a memorial stone at the site of the former military barracks (now the education campus) beside the Garage Theatre on the Armagh Road.

Colour party at the memorial stone

He died in June last year. The third annual commemoration took place this afternoon, with prayers led by a former army chaplain from Co. Cavan. I was asked to read out the poem for veterans ‘A Soldier’. 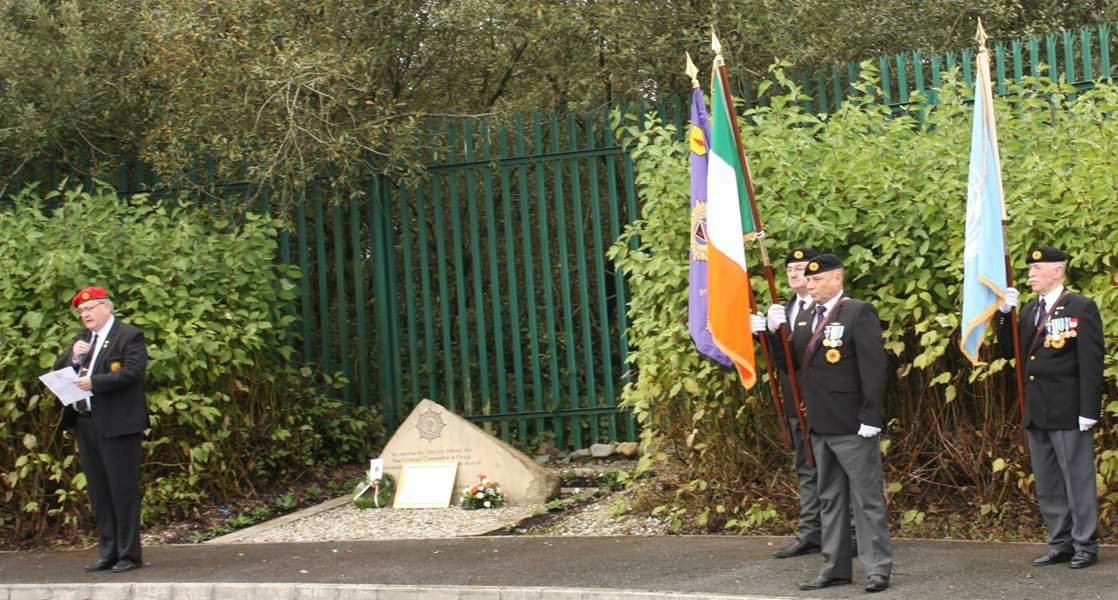 There were 79 names of the deceased listed on a framed sheet beside the memorial. They were soldiers who served in Dún Uí Neill Cavan, the Tanagh outpost in Cootehill and the barracks in Monaghan. We will remember them. REST IN PEACE.

The names of the deceased from 29th Infantry Battalion 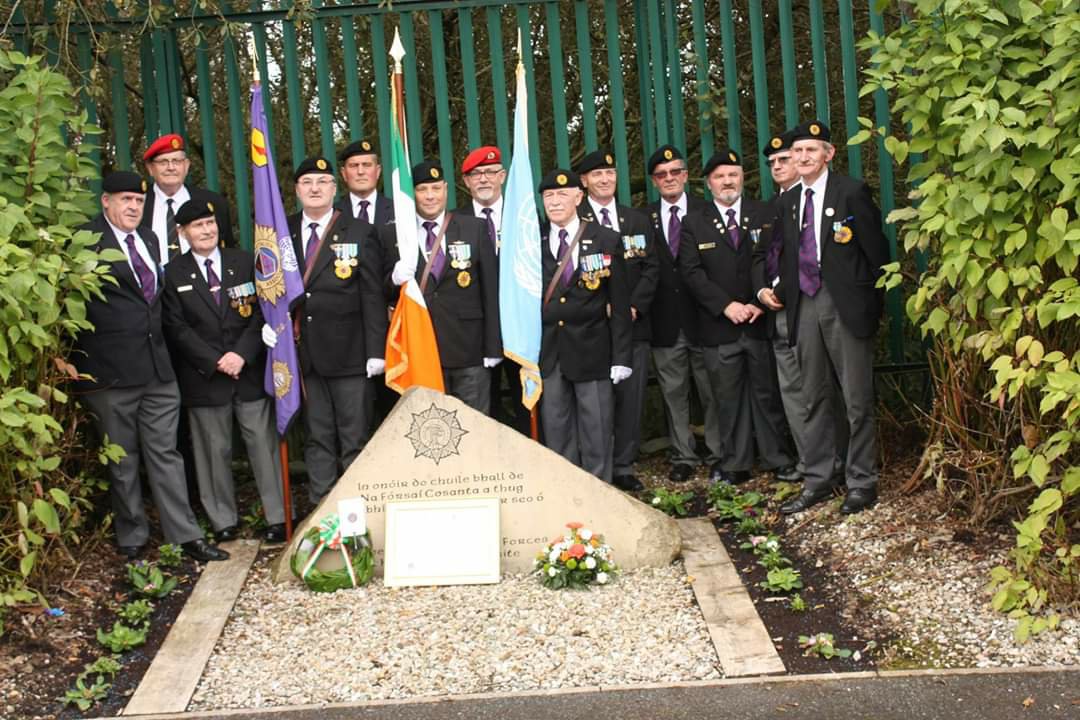 Paying respect to deceased members of the 29th Infantry Battalion

Standing to attention during the ceremony

One of the wreaths laid by Denis Barry

Paying respect at the memorial stone

The highlight of our five day visit to Flanders was to attend the daily Last Post ceremony at the Menin Gate memorial in Ieper. Buglers from the local fire brigade sound the Last Post at 8pm. It’s a tradition that was started after the end of WWI in July 1928.

Charles Wills placed a wreath in memory of soldiers from Co. Mayo

One wreath was laid by Charles Wills from Foxford in memory of Irish soldiers in the British Army who were from Co. Mayo.

I laid a laurel wreath with a tricolour ribbon attached in memory of all those soldiers from the island of Ireland who died in the 1914-18 conflict. 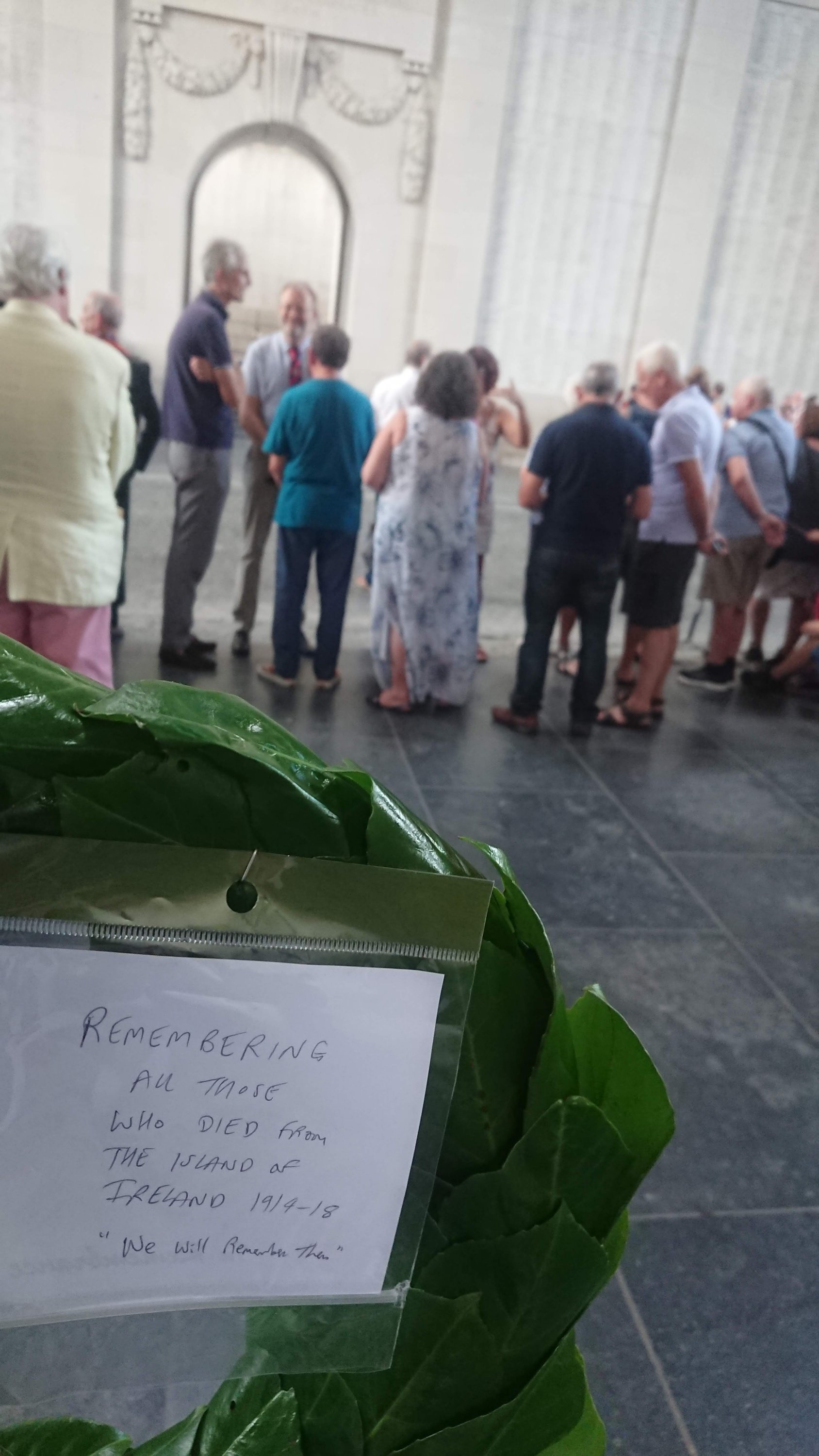 Waiting to lay the wreath

Along with Charles we waited in line behind some former British soldiers and a group from the Orange Order in Scotland for our turn to lay the wreaths at the memorial.

Laying a wreath in memory of those soldiers from Co. Mayo killed in WWI 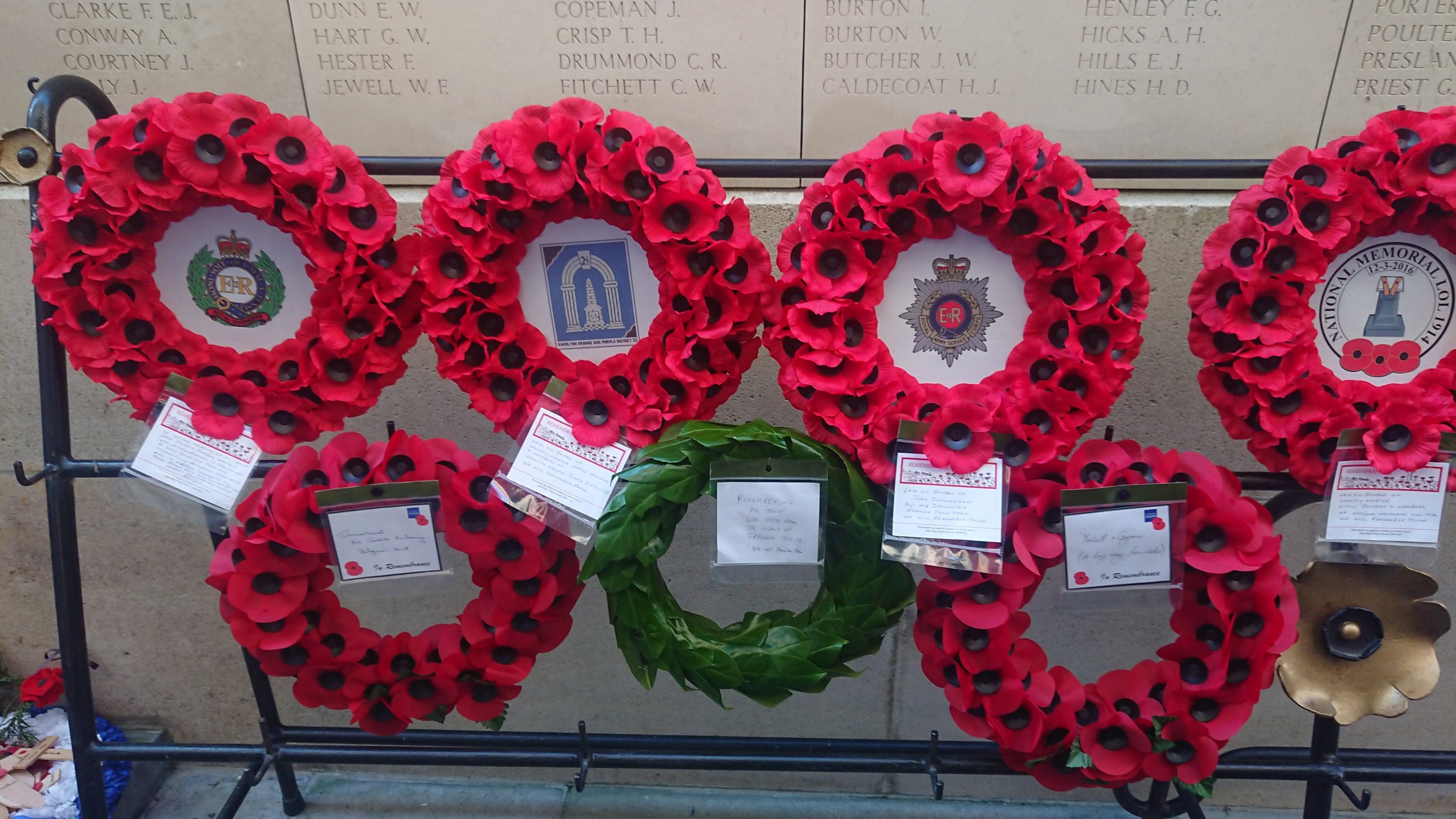 Placing a wreath at the Menin Gate memorial 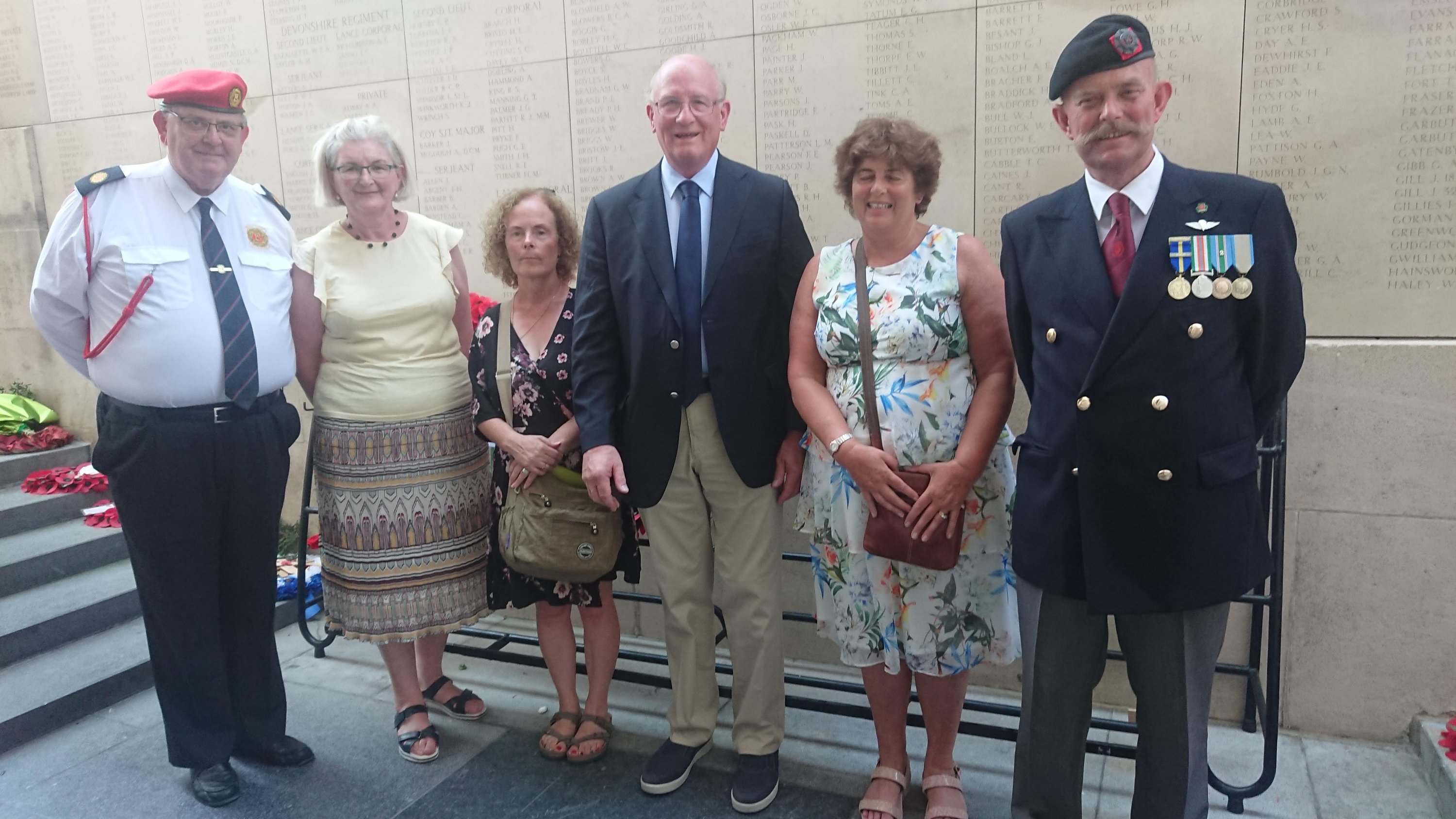 Our group at the Menin Gate following the ceremony

It was a fitting end to a very busy day visiting some of the CWGC cemeteries in Flanders around Ieper. We will remember them. 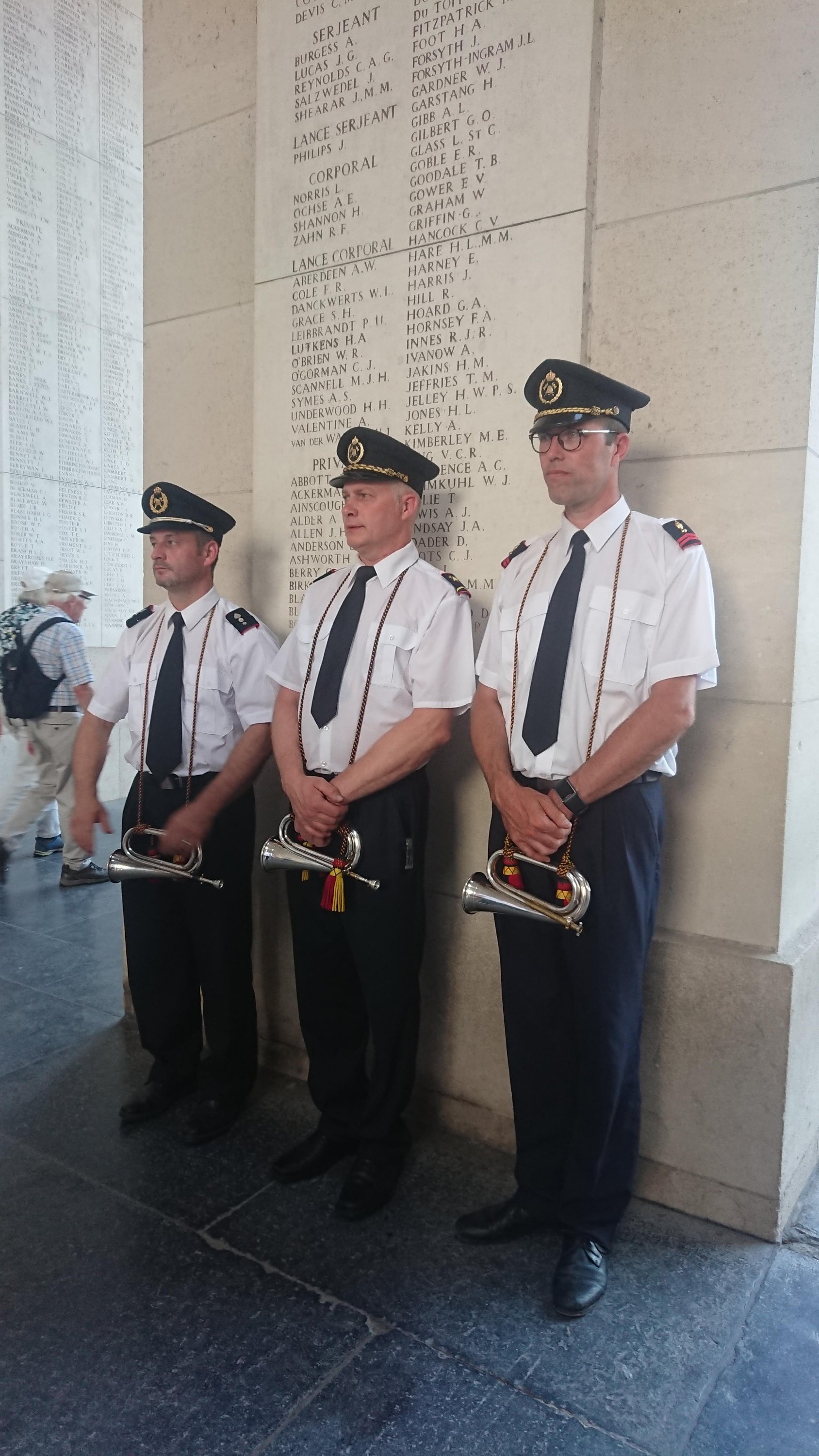 On the fourth day of our tour in July, the group attended the daily Last Post ceremony at the Menin Gate Memorial in Ieper. Two of us laid wreaths along with several other groups. See a separate report. 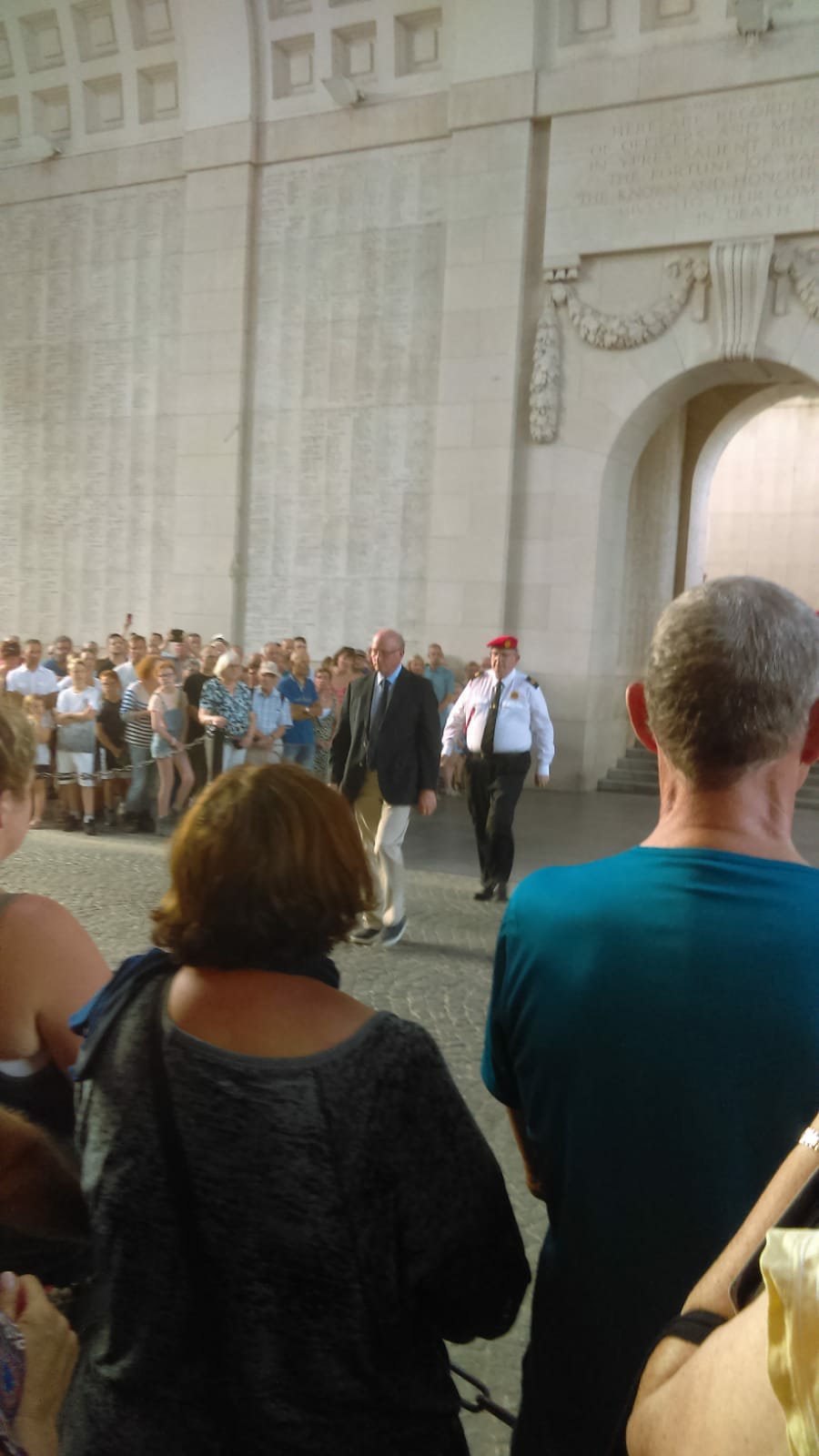 Wreath Laying at the Menin Gate

On Friday, 6th September a special ceremony was held in Ieper to commemorate the 75th anniversary of the liberation of the city 75 years ago by the 1st Polish Armoured Division commanded by General Maczek on 6th September 1944. 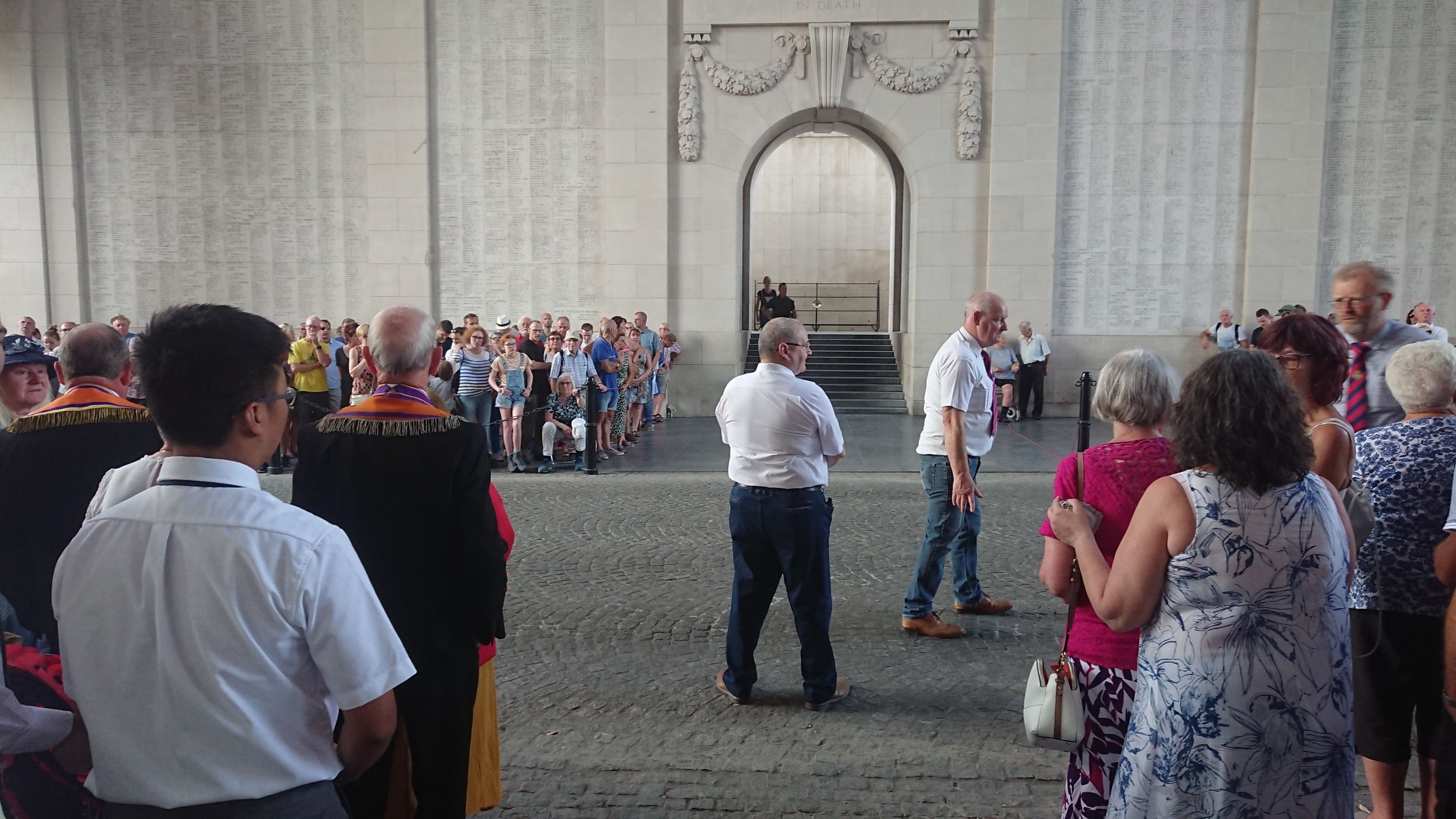 The daily Last Post ceremony was held for the first time on 2nd July 1928. It was suspended on 21st May 1940, following the German occupation of the city at the start of the Second World War. It is not known whether this was a decision imposed by the occupying German authorities or was voluntarily undertaken by Richard Leclercq, who was then chairman of the Last Post Committee.

From January 1941, the Ieper Last Post ceremony was continued at Brookwood Military Cemetery in Surrey and this at the initiative of Edgar Ashley Cook, MBE. A number of members of the Belgian Defence Forces who died during their WWII service in England are buried there.

Guy Gruwez, honorary chairman of the Last Post Association: “By 5 o’clock in the afternoon of 6 September 1944, the city had already been liberated by the Polish Division that was fighting alongside the Canadian Army. There was a great sense of joy and relief. Bugler Jozef Arfeuille thought immediately to celebrate this unique moment by a resumption of the Last Post ceremony. He went with a group of neighbours and friends to the Menin Gate, where he played the Last Post no fewer than six times, or so it is claimed, to mark the restoration of our freedom. In this way, the daily ceremony was re-initiated after a gap of four years.” 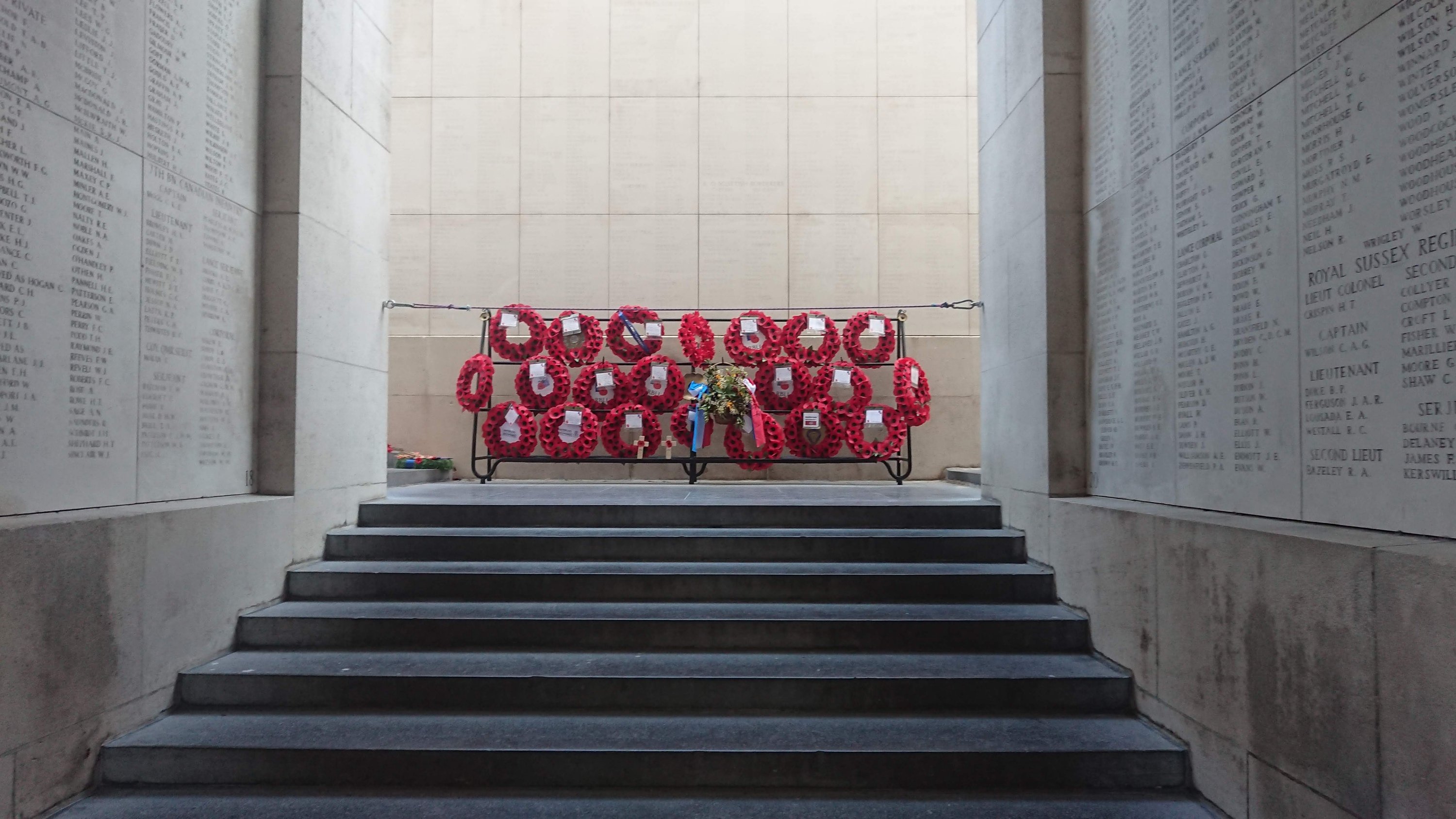 For many years, the City of Ieper has commemorated the liberation together with the City of St. Omer, the city in France with which Ieper is twinned. Both cities were liberated on the same day in September 1944 by the same Polish Armoured Division. The commemorative ceremony is held on alternating years in each city. In 2019, it is the turn of St Omer, where the ceremony take place on Sunday, 1st September.

Fisher J. (no relation) was an English soldier

Alderman Diego Desmadryl: “Because this year is a special anniversary, the City of Ieper did not want to let this occasion pass without some form of recognition. As a result, we arranged a programme of events in Ieper on Friday 6th September. This consisted of a short ceremony at the Polish memorial plaque on the Cloth Hall at 19:30hrs, followed by the daily Last Post ceremony at the Menin Gate at 20.00. This was arranged by the city authorities in collaboration with the Last Post Association and the Royal Association of Veterans (and persons treated as such).”

Benoit Mottrie, present chairman of the Last Post Association: “On 6th September 2019, the Last Post ceremony was held for the 31,520th time. During the past 25 years, public and international interest has increased enormously. For this reason, I would like to take this opportunity to thank all my predecessors, all past and current members of the board of directors and all other supporters of our Association. In particular, I would like offer a special word of thanks to all past and present buglers and ceremonial assistants, who give their time so freely and so generously. In this way, we will continue to remember each day those who died for the liberation of the city and the restoration of our freedom.” 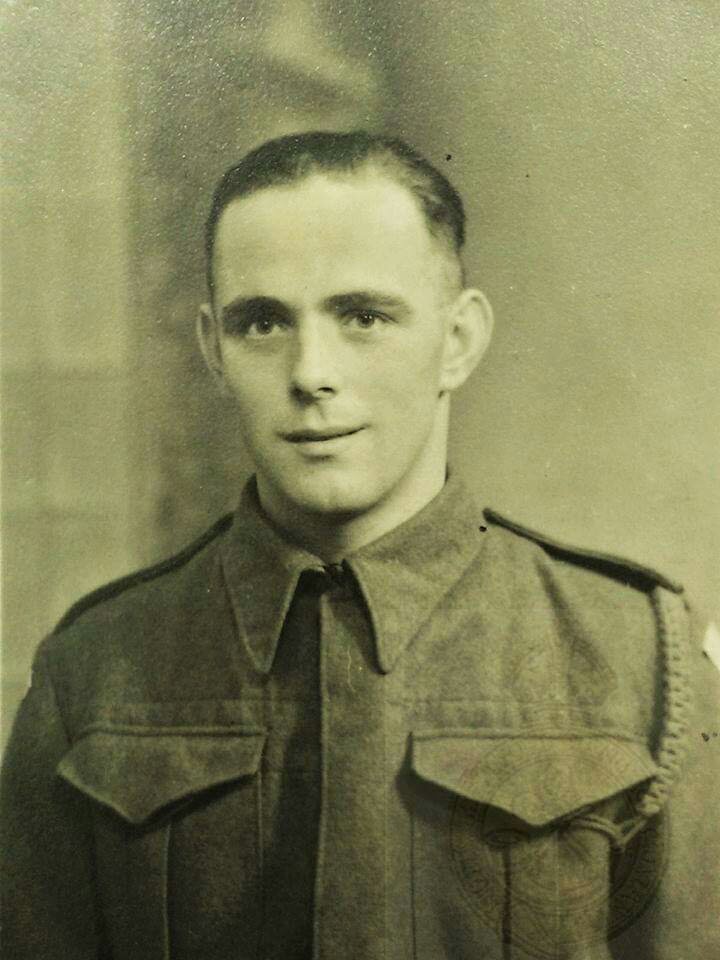 A member of the Sherwood Rangers Yeomanry, he was killed 75 years ago on Sunday 10th September 1944 when his C Squadron tank was hit at the Doornboom crossroads during the battle to secure the bridgehead over the Albert Canal at Geel in Belgium.

The rest of the crew, the commander Captain John E. Mann MC, Trooper Ernest Winchester and Trooper John Saunders, were also killed. All were buried by the unit’s chaplain Reverend Leslie Skinner in St Apollonia’s churchyard at Stelen two days later, where they still lie. 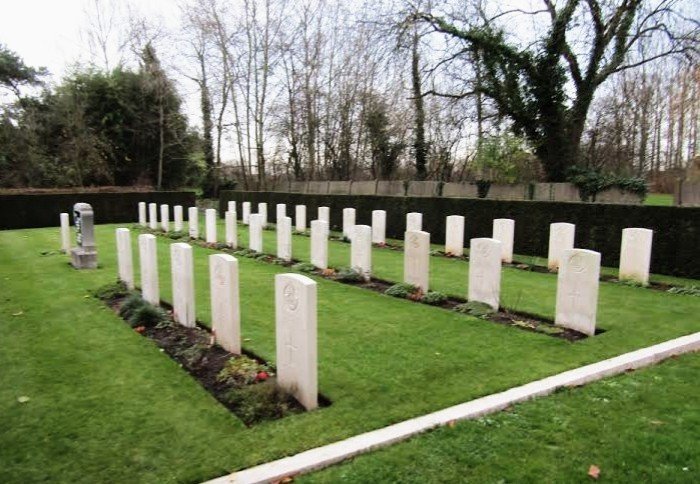 The padre was the first chaplain to land on the Normandy beaches on D-Day in June 1944 with the unit.
Geel is twinned with Tydavnet and Monaghan. 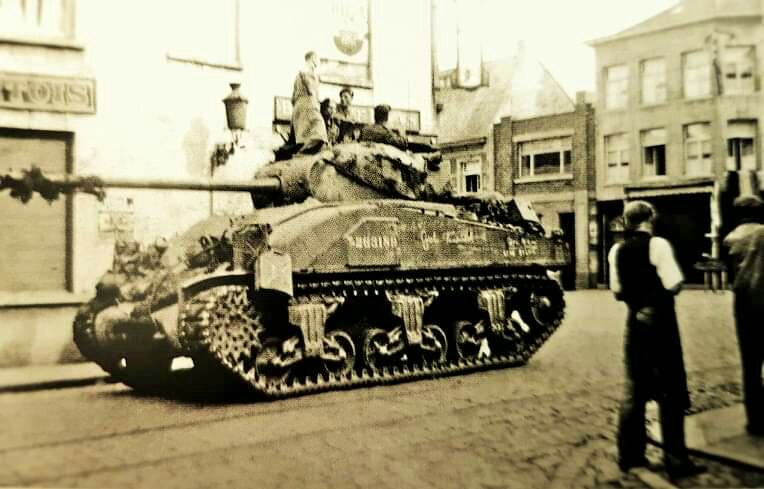 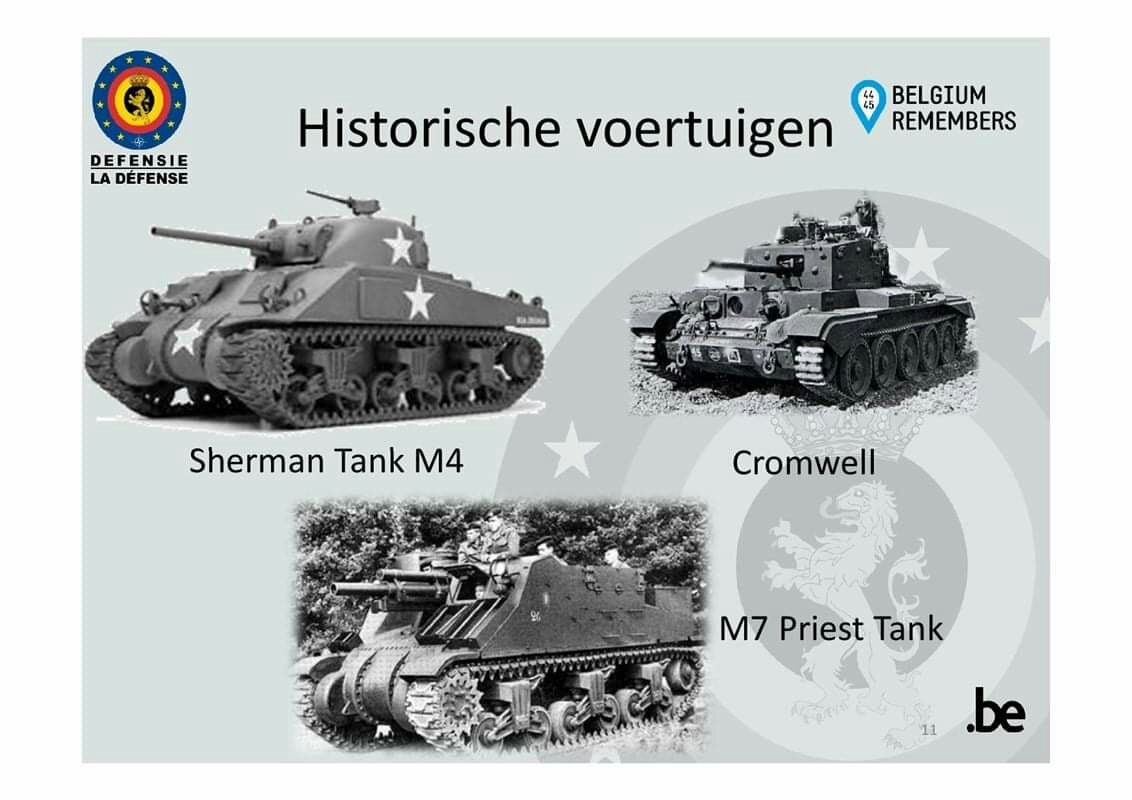 Moving away from WWI to WWII but staying in Belgium, this is the 75th anniversary of the Battle of Geel. A number of commemorative events are taking place, including a weekend of re-enactments and other activities.

The Battle of Geel occurred on 10th and 11th September 1944. Many of the British soldiers who fought in the Sherwood Rangers and other regiments such as the Irish Guards are buried in the CWGC cemetery in Geel. This town in Belgium is twinned with Tydavnet and Monaghan. I notice that one of the casualties was a Trooper Reid from Dublin. He is buried at Stelen churchyard.

From the Sherwood Rangers Yeomanry 1939-45 page:

Tpr. Reid, aged 21 from Dublin, Ireland, was killed on Sunday 10th September 1944 when his B Squadron tank was hit at the Doornboom crossroads during the battle to secure the bridgehead over the Albert Canal at Geel, Belgium.
The rest of the crew, Capt. John Mann MC, Tpr. Ernest Winchester and Tpr. John Saunders, were also killed and all were buried by Padre Leslie Skinner in Stelen churchyard two days later, where they still lie. 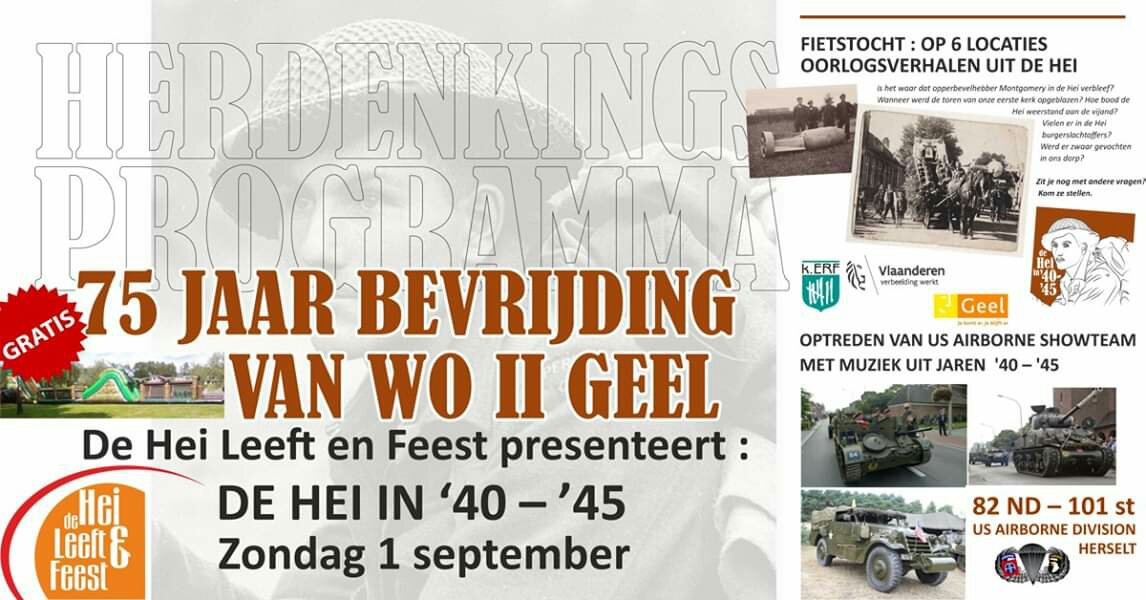 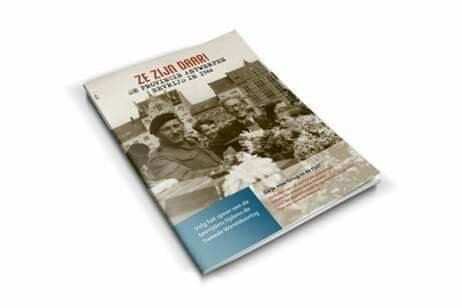 ‘They are here!’ Remembering the liberation of Flanders by the Allies 1944/45