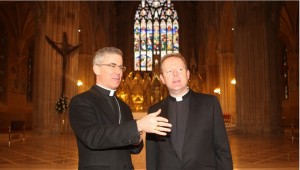 More than two years after Cardinal Seán Brady made a request to the Vatican, Pope Benedict has appointed Monsignor Eamon Martin from Derry as Coadjutor Archbishop of Armagh (an assistant with the right to succeed to the post of Archbishop). I have not met him but he came across in television and radio interviews as a very capable and enthusiastic clergyman. He made clear the Catholic church’s position regarding abortion and the ongoing discussions in the Republic about the “X” case. He also spoke about his upbringing in Derry as one of a family of twelve (six boys and six girls). Monsignor Martin is expected to be ordained as Coadjutor within a few months.

52-year-old Monsignor Martin has been Apostolic Administrator of the Diocese of Derry since November 2011 and the two former Bishops Seamus Hegarty and Edward Daly have welcomed his appointment. Speaking at St Patrick’s Cathedral in Armagh, Cardinal Brady welcomed the man who will take over from him in due course. He described Monsignor Martin as a man of great gifts and great generosity who he said would know how to use those talents in the education of people, young and old.

A former pupil of St Columb’s College in Derry, he was ordained in Maynooth in 1987 aged 26. He later became a teacher at St Columb’s and was promoted to President of the College in 2000. He is a director of the National Board for Safeguarding Children, which was established by the Catholic church following revelations about clerical sex abuse in a number of dioceses.