It was, as the BBC reporter described it, the stuff of fairy tales. Minnows Bradford City became the first League Two (fourth tier) side in English football to reach the final of the League Cup in fifty years. The last was Rochdale in 1962. Getting to Wembley is expected to earn the club £1 million pounds. Not bad going for a side who had two pre-season friendlies in Ireland (both wins) against Wexford Youths and Bray Wanderers. Shortly afterwards at the start of the season, they hammered the team I support, AFC Wimbledon, 5-1 at the Coral Windows stadium at Valley Parade in front of a crowd of nearly 9,500. On the bench that day was a young Donegal lad Carl McHugh from Lettermacaward, who had just joined the Bantams and made his League Cup debut a few days later against Watford. In October the 19 year-old defender had his Football League debut and the following month his header helped Bradford to win their FA Cup match against Watford. 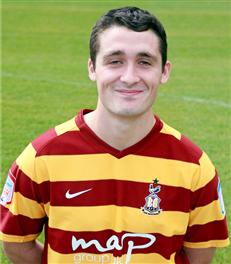 It was another header from McHugh that helped City win the first leg of their semi-final in the League Cup against Aston Villa. Although going down 2-1 last night in the return leg at Villa Park, their home win meant they went through 4-3 on aggregate. Ironically the first leg goal by McHugh was put past one of his football heroes, Irish international keeper Shay Given, who is also a Donegal man. Mc Hugh is clearly a rising star. He began on a scholarship with Reading when he was 16, then played on loan for Swindon Supermarine and then Dundalk in the Eircom League. He has represented his country at under 17 and under 19 level.

This is the biggest achievement by Bradford since they won the FA Cup in 1911. Looking at their history, I discover that like Wimbledon, they were once in the Premiership. At the end of the 1999/2000 season,  “Sunday 14th May saw Liverpool at the Bradford & Bingley Stadium (as it was then called) and Bradford knew they had to better Wimbledon’s result, who were playing at Southampton, to ensure they stayed in the Premiership and condemn fellow strugglers the Dons, who were level with City on points but had a better goal difference. A 12th minute header from David Wetherall and a 2-0 defeat for Wimbledon sent the whole of Bradford into raptures and saw Premiership football at Valley Parade for another season.”  It was the finish of a fourteen year stay in the top tier for the Dons, who were managed by Terry Burton at the time and were playing their home games at Selhurst Park. It was also the beginning of the end for the club, as moves began against the wishes of most fans to relocate to Milton Keynes, sixty miles away.

I wish Bradford every success on February 24th at Wembley against Swansea City, who had a goalless draw against Chelsea tonight and won on aggregate 2-0. But I very much hope AFC Wimbledon’s form will have improved by February 16th, when their home match against Bradford is scheduled. The Dons lost to Stevenage 3-1 in the first round of the Capital One Cup in August. They are currently struggling second from bottom, in the relegation zone of nPower League Two but you can watch them in action tomorrow night against Port Vale LIVE on Sky Sports, kick-off 19:45 (weather permitting). Today a major snow-clearing operation was mounted with the help of 60 supporters and under-18 players, in order to ensure that the pitch at Kingsmeadow would be playable.

2 thoughts on “FROM BRADFORD TO WEMBLEY”