The reformation of The Boomtown Rats gives me a chance to boast about my first broadcasting scoop. It was 1977 and no-one had ever heard of this pop group with the strange-sounding name. I interviewed the band (except Bob Geldof) for radio and ensured their first ever broadcast on the BBC. At that stage their single “Looking after No 1” had just appeared on a New Wave LP (first track on the “B” side) along with songs from The Ramones (“Judy is a Punk”; “Suzy is a Headbanger”) and various others of the punk rock variety. John Peel gave it an outing.

I was able to go one better, thanks to my sister in Dublin who knew this up and coming band from the Dún Laoghaire area. The group had completed an Irish tour in 1975 and the following year moved to London. I was working at Pebble Mill as a News Producer (reporter/presenter/producer) with BBC Radio Birmingham at the time. Being a local radio station, it meant that I could contribute to the sports programmes at the weekend. Nuneaton v Wimbledon was my first sports report. But I was also able to do interviews for various music programmes including Norman Wheatley’s “Gentlefolk”. I got to meet The Dubliners, The Chieftains, Frank Patterson and Eily O’Grady and Horslips when they came to the heart of England.

Malcolm Jay presented a Tuesday night rock show, “Heavy Pressure”. When I mentioned that this new rock band from Ireland who had appeared a month earlier at Birmingham town hall with Tom Petty and the Heartbreakers was coming to Wolverhampton and I might be able to get an interview with them, he sounded interested. So on July 20th 1977 my sister came over from Dublin and we drove to the La Fayette night club near the centre of Wolverhampton.

We arrived early and there was no sign of anyone. Eventually a van arrived with five of the Boomtown Rats and their gear. Lead singer Bob Geldof travelled separately. So while the band waited in an empty club, I sat down with the group, having been introduced to them by Carolyn. I had brought my UHER reel-to-reel tape recorder that we used for interviews. I spoke to each in turn, including the man with the funny name. Pete Briquette. Bob Geldof eventually turned up and said hello. The group performed that night to a crowd of less than 100. A few days later the interview (which I still have a copy of) was broadcast, along with Looking after no.1 and another track as well (possibly Mary of the fourth form). 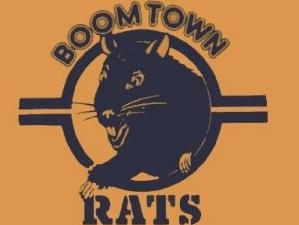 I am glad I spotted the potential of the band at an early stage and followed their progress over the years. Then this morning courtesy of the John Murray show on RTÉ Radio 1 I listened to Pete Briquette explain the plans by the band (or at least himself, Geldof, Simon Crowe and Garry Roberts) to get back together again in time for the Isle of Wight festival from 13th-16th June at Seaclose Park. The Rats will join a line-up also featuring The Killers and Bon Jovi, who have already been announced as headliners for the first major festival of the summer.

A Tonic for the Troops

The BBC reports that Bob Geldof said: “I’ve always fancied playing the Isle of Wight Festival ever since I hitched there in the good/bad days when I was a kid.” The band have been playing live in recent years without Geldof. The Boomtown Rats were  the first Irish band to have a UK number one hit with Rat Trap. They followed that up with another number one with I Don’t Like Mondays, which was a hit around the world. They recorded six albums, three of which made the UK top 10, before splitting up in 1986.

The band’s last major live performance was at the 1985 Live Aid concert at Wembley, organised by Sir Bob Geldof.

2 thoughts on “THE BOOMTOWN RATS”