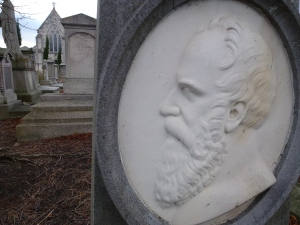 Commemorating the 144th anniversary of the death in January 1869 of the leading Irish author William Carleton last weekend, I laid flowers at his grave at Mount Jerome Cemetery in Dublin. It also gave a group of us an opportunity to visit the graves of several other famous Irish people. The graveyard contains one of the finest collections of Victorian memorials, tombs, vaults and crypts in Ireland.

Carleton’s last resting place is relatively easy to find, as it is on close to the main avenue leading up to the church, on the right hand side. It is marked by a small obelisk, raised ‘to mark the place wherein rest the remains of one whose memory needs neither graven stone nor sculptured marble to preserve it from oblivion’. It includes a sculptured portrait of Carleton by James Cahill, set in stone. It was restored and unveiled on 15th August 1989, thanks to the William Carleton Memorial Committee that included the writer Benedict Kiely, Barbara Hayley (NUI Maynooth) and Vivien Igoe. In her book, “A Literary Guide to Dublin“, Methuen 1994, she recalls how:-

“Kiely said in his oration that Carleton, as a novelist, had taken up the issues of tenants’ rights, emigration and famine and had put down on record the Irish people as he remembered them before the famine, before they were practically wiped out. Irish people have not much changed, he said”. 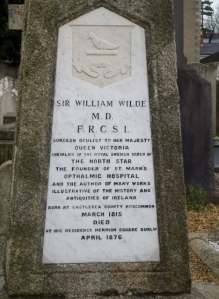 The next significant grave close to the entrance to the church is that of Dr William Wilde, eye and ear surgeon, father of Oscar and husband of Lady Jane Wilde, neé Elgee. She was an important figure in her own right, a poet and writer, who published under the name “Speranza” and played a part in the Irish literary revival. Oscar is buried in Paris. The side of the memorial carries the inscription: “In Memoriam Jane Francesca, Lady Wilde, ‘Speranza’ of The Nation, Writer, Translator, Poet and Nationalist, Author of Works on Irish Folklore, Early Advocate of Equality for Women and Founder of a Leading Literary Salon. Born Dublin 27 December 1821              Died London 3 February 1896.  Wife of Sir William and Mother of William Charles Kingsbury Wilde, Barrister and Journalist 1852-1899 Oscar Fingal O’Flahertie Wills Wilde, Poet Wit and Dramatist 1854-1900 Isola Francesca Emily Wilde 1857-1867 “Tread lightly, she is near, Under the snow, Speak gently, she can hear The lilies grow“. 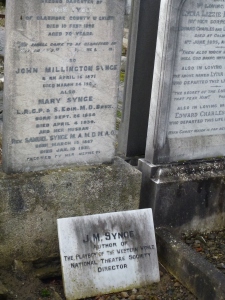 Another important figure in the Irish literary renaissance was the playright, John Millington Synge. His grave was more difficult to find. Synge was born in Rathfarnham, Co.Dublin on April 16th 1871 and died on March 24th 1909. He is best known for writing “The Playboy of the Western World“.  His brother, Reverend Samuel Synge who was a missionary in China is also buried there along with his wife Mary and his aunt Jane, second daughter of John Hatch Synge of Glanmore, Co.Wicklow. 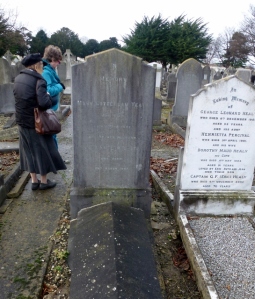 WB Yeats was another leading figure in the Irish literary revival. His grave is in Drumcliff churchyard, under bare Ben Bulben’s head in Co.Sligo. But his brother, the painter Jack Butler Yeats, lies in Mount Jerome. He died on March 28th 1957, although the faded bronze lettering on the tombstone makes his grave difficult to spot. He was elected a member of the Royal Hibernian Academy in 1916. In 1999 one of his paintings was sold at Sotheby’s in London (where he was born in 1871) for over £1.2 million pounds. His wife Mary Cottenham Yeats predeceased him by ten years.

Buried in a different section is another member of the RHA, Sarah Purser. One of her paintings of a coastal scene in the West of Ireland was sold by Ross’s auctioneers of Belfast in 2007 f0r £2400. Not far from her grave is buried the writer Joseph Sheridan Le Fanu, but his exact burial spot could not be found, despite the assistance of a map. I think I saw two graves lying side by side near a tree and next to the path, but I could not find any inscription on the stones. 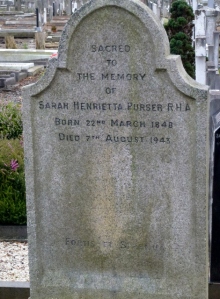 While wandering around I noticed a Celtic Cross and looked at the inscription. It turned out that the person buried there, James Hamilton Moore,  came from Aughnacloy, Co.Tyrone where some of my relatives on my mother’s side come from. Further research revealed his name in the British Parliamentary Papers on Ireland in a report on the (sectarian) riots in Belfast in July and September 1857. It seems things have not changed much in over 150 years! Moore is listed in an Appendix as part of evidence presented on behalf of the Orange Society (Order), of which he was a senior member. 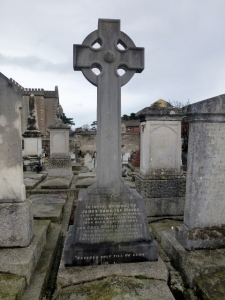 Moore was Grand Treasurer of the Trinity College Grand District and was a solicitor with an address at 56 Lower Gardiner Street in Dublin (then a fashionable Georgian street). He is also listed as Deputy Grand Secretary of the Grand Orange Lodge of Ireland which met at Molesworth Street in Dublin in November 1856 and his address is given as Gardina Lodge, Monkstown, Co. Dublin.  So next time you have to attend a funeral or cremation at Mount Jerome, take the opportunity to think of all the others who found their place of eternal rest there. They include the writer AE (George Russell), Benjamin Guinness of the brewing family and Sir William Rowan Hamilton, mathematician and astronomer. Since the 1920s Catholics have been buried at the cemetery. In 1994 the remains of the well-known criminal Martin Cahill “The General” were brought there and his grave is now unmarked owing to vandalism.

One thought on “MOUNT JEROME CEMETERY”