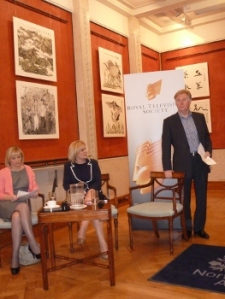 Martina Purdy political correspondent of BBC NI said she would never go into politics. Tracey Magee acting political editor of UTV believed the skills of journalism does not translate into politics. Both were asked if it was time for a female journalist to go into politics during a discussion at the Long Gallery at Parliament Buildings in Stormont, hosted by the Royal Television Society NI. Martina told the audience that journalists (with few exceptions) do not make good politicians. Those who remember the experience of RTÉ’s George Lee who was elected as a Fine Gael TD in June 2009 and resigned nine months later will agree with that.

If you want to gain a further insight into the discussion for which former UTV News Editor Rob Morrison acted as question master, you can follow it on twitter @RTS_NI. Twitter itself was the subject of one of the questions about the role of social media in coverage of politics in Northern Ireland. Tracey’s view was that twitter is far more immediate and can make things very difficult for journalists covering a story. She felt there was a lack of understanding about how it works. When she tweeted the words of a politician, she was reporting and was not giving her own opinion. Yet some users failed to make the distinction.

For Martina as a working journalist, twitter can be “a bit of a nightmare”. It can be very very annoying at news conferences in her view, and she would like to ban it on such occasions. She gave one example when Jim Allister of the TUV referred to Eamon Mallie as a “tweet freak”.  Michael Wilson managing director of UTV who organised the meeting on behalf of the RTS said he believed there was a good balance of political coverage in Northern Ireland and some of the Assembly’s best work goes unreported.

Earlier the visitors were given a briefing in the Senate chamber by Susie Brown, Head of Communications of the NI Assembly and Norah Anne Baron MD of Pi Communications, which has the contract for the broadcasting of proceedings. The group was then given a tour of the studios, including the Pi Communications control room and the UTV studio, which Tracey Magee broadcasts from. 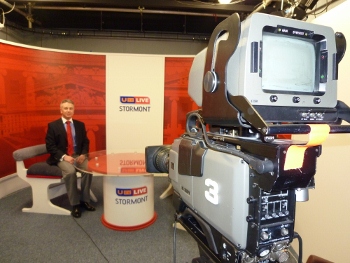