Coleraine 0 (1) Shamrock Rovers 2 (0)
A great result for the Hoops tonight at the Showgrounds.

That’s as far as I got when my mobile phone battery ran out as I travelled on the train back to Belfast, making use of the excellent wi-fi facilities the new rolling stock has. Thanks Translink! Now that I am back home by midnight, I can complete the task and add my photos.

This was a much better performance by Rovers than in the first leg at Tallaght, when they went down 1-0 just before half time. The visiting fans sang their way home to Coleraine, I expect, as they were cheering their team throughout and were still in fine voice when they left Dublin.

It was the other way round though at the Showgrounds in the second leg. Trailing by a single goal, Rovers were quick off the mark and showed a determination that had been lacking in the first leg. Jason McGuinness had the first chance from a free kick, but his effort went wide. Striker Mark Quigley gave them the goal they were looking for in the seventh minute, with a fine six-yard volley.

Coleraine took time to establish themselves and after 27 minutes had their first chance with a Stephen Lowry header. Shane Jennings then sent a shot just wide when a corner was flicked on by Lowry. Ruairi Harkin also came close. 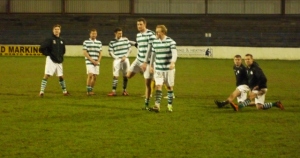 Eight minutes into the second half, Gary McCabe became the first of three Rovers’ players to receive a yellow card. A James Chambers shot was tipped onto the bar by the Coleraine keeper Michael Doherty and the visitors had another chance within a minute, from the resulting corner.

Rovers kept up the pressure but it needed two substitutions by manager Trevor Croly before the right combination could be found. Strikers Ciarán Kilduff and Thomas Stewart were brought on in the 69th and 77th minutes respectively.  With two minutes of additional time just called and just as it seemed the match was going into extra time, the decisive strike came, thanks to Kilduff whose shot found the bottom corner of the net after a scramble in the goalmouth. It marked the first win in a competitive match for the new Rovers’ manager, who was appointed in November last year before the start of the new Airtricity League season in March.

In the second round of the Setanta Sport Cup, Shamrock Rovers have been drawn against Linfield, with the first leg at Tallaght on March 4th and the return a week later at Windsor Park, not far away from me on the Lisburn Road. I hope that any true Rovers fans who travel North will be given as hospitable a welcome as they got at the Social Club in Coleraine, where politics was put to one side and sport reigned. This was a truly sporting occasion of cross-border significance and I was also pleased to witness the friendliness of the Coleraine fans who travelled to Tallaght last week. These two Rovers’ supporters arrived in a happy mood and went home to Dublin even happier! 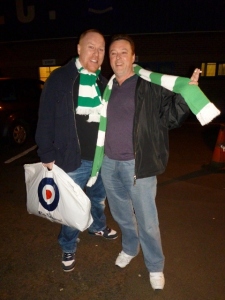 Come on You Hoops!