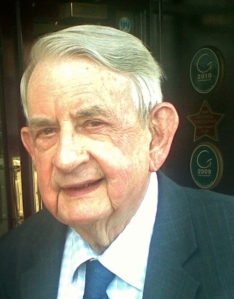 The departure of Pope Benedict XVI into retirement took everyone by surprise, as no pontiff had done so for 600 years and that time it was under duress, whereas this departure was voluntary. It’s a suitable time  to look back at the career of Josef Ratzinger, who had been elected Pope in 2005. My father Des Fisher as Editor of the Catholic Herald in London was one of the international press corps who covered the Second Vatican Council in Rome, which began in 1962. Now 92, he has been reflecting on the time when he produced what he believed was the best work of his long journalistic career, at what was a most interesting time to be a Catholic.

He spoke to Eileen Dunne for the God Slot on RTÉ Radio 1 and during their conversation, he gave his views on the German theologian who later became Pope. He also disagreed with the view expressed by Pope (Emeritus) Benedict, who told priests from the diocese of Rome in one of his final addresses last month that many of the misrepresentations of Vatican II were caused by the media promoting its own version of what was happening.

He relates the story about the period when Ratzinger was a Professor at Bonn University and was asked by Cardinal Frings of Cologne to write a speech for him for a talk in Genoa. Frings then took him to the Vatican Council as an advisor. At this stage, he was a very progressive theologian. He was also a friend of Hans Küng and with his help got a post in dogmatic theology at the university of Tübingen, where according to Küng, he put forward some very progressive ideas. Student riots there in 1968 seem to have had an effect on Ratzinger though; he did a U-turn and became a great conservative overnight.