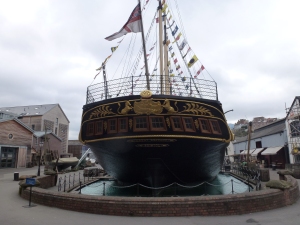 This is the story of Brunel’s ship, now preserved at Bristol Docks after being rescued from the Falkland Islands in 1970. Launched in 1843, she was the world’s largest ship and the first iron-hulled passenger vessel. Thousands flocked to her launch in Bristol. The ship became a huge success, travelling 32 times around the globe and clocking up nearly 1 million miles at sea. 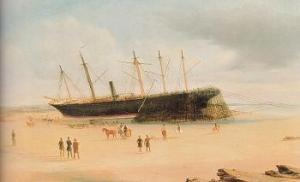 But in 1846, a few years after the launch, there was a near disaster for the ship. The Dundrum Bay story of 1846 is featured in part of the exhibition in the former dock building alongside the preserved ship. The web page devoted to the ship’s designer, Isambard Kingdom Brunel, tells the story as follows:-

“On 22nd September 1846, the Great Britain sailed from Liverpool on her fifth voyage with 180 passengers, the most that she had ever carried. Later that night while passing the coast of County Down, she ran aground in Dundrum Bay. It was a squally night with rain and Chicken Rock Light on the Isle of Man had not been sighted and the ship ran too far before turning up the Irish coast. There were no casualties and the passengers were embarked next day but the Great Britain was stuck fast and holed. It was nearly twelve months before the ship was towed back to Liverpool at the end of August 1847. The cost of repairs were estimated at £22,000 but the ship was under insured and the company did not have the resources to cover the difference. Consequently, the company was forced to sell its two famous ships the Great Western and the Great Britain“. 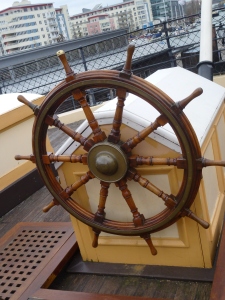