Look around you in Bristol and the influence of one man is clear to see: the engineer, Isambard Kingdom Brunel (1806-59). If you arrive by train at Temple Meads station, you will see on your right hand side as you leave the main entrance to walk down to the main road the original station built by Brunel for the Great Western Railway of which he was chief engineer. Opened in 1840, it served the route to London Paddington and continues to do so. I noticed there is now also a connection run by South Western trains to London Waterloo, taking an hour longer but possibly cheaper, depending on the time of travel.

Brunel built his railway using a broad gauge  measuring 7 feet 0 1⁄4 inches. This helped to provide additional comfort for passengers but made construction more expensive. Later a standard gauge was introduced of  4 feet 8 1⁄2 inches, although in Ireland a slightly wider gauge was chosen of 5 feet 3 inches. Temple Meads station is now owned by Network Rail and is one of the busiest railway hubs outside London.  It is operated under a franchise by First Great Western, who provide the majority of trains to London, along with local services and routes to destinations such as Cardiff, Southampton, Portsmouth and Weymouth.

One of Brunel’s best known projects is the Clifton Suspension Bridge, spanning the gorge above the River Avon and linking Clifton in Bristol with Leigh Woods in North Somerset, a National Trust property. With a span of over 700 feet, this made it the longest span of any bridge in the world at the time of its construction, which started in 1831. Brunel did not live to see its completion in 1864, five years after his death. Work had been suspended for a number of years owing to a lack of funding. At the bottom of the cliff where there is a winding path up to the level of the bridge, there is a derelict building. It still carries the sign “Clifton Rocks Railway”. 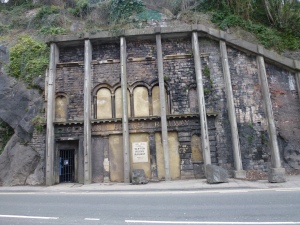 This was a water-powered funicular railway to take visitors up to the top of the cliff.  I have just noticed that I was passing the site almost to the day that coincided with the 120th anniversary of its opening. It closed in 1934 and during the second world war it was used a a secret transmission base for the BBC. I never realised that when I was working for the BBC in Bristol! The information can be found on the website of the trust which is trying to restore the railway, the top entrance to which is located beside the Avon Gorge Hotel. Details of the trust’s open days can be found here.

The other significant project for which Brunel is known is the construction of the SS Great Britain. Brunel had become convinced of the superiority of propeller-driven ships over paddle wheels. After tests, he incorporated a large six-bladed propeller into his design for the 322-foot Great Britain, which was launched in 1843. She is considered to be the first modern ship, being built of metal rather than wood, powered by an engine rather than wind or oars, and driven by propeller rather than paddle wheel. She was the first iron-hulled, propeller-driven ship to cross the Atlantic Ocean. Her maiden voyage was made in August and September 1845, from Liverpool to New York. In 1846, she ran aground at Dundrum Bay, off the County Down coast. She was salvaged and then re-entered service  for the route to Australia. The ship was also used to carry troops such as the 57th Regiment of Foot, along with their horses and supplies, heading to the Crimean campaign. 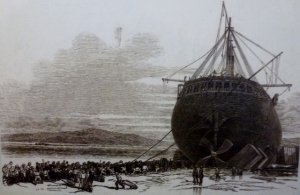 There are a number of statues dotted throughout Britsol. I saw one for the Irish orator and MP Edmund Burke, one of Queen Victoria and another for Edward Colston, a businessman and benefactor. But I did not see any memorial for Brunel, apart from his works. There is one at Temple in London. So reader, if you seek his monument, look around you, or as the Latin inscription  on the tomb of Sir Christopher Wren at St Paul’s Cathedral states ” LECTOR SI MONUMENTUM REQUIRIS CIRCUMSPICE“.