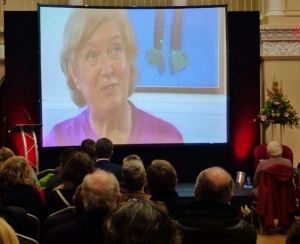 This was a special afternoon in South Belfast. The President of Ireland Michael D. Higgins along with one of his predecessors Mary Robinson joined trade unionists, community and human rights activists to say thanks for the life of a good friend. Few people could have imagined such a gathering anywhere in Northern Ireland 25 years ago or more during the troubles. 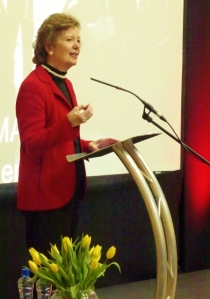 Some of Mary Robinson’s visits to Belfast in the past were very controversial, especially the one in 1993 when she shook hands with Gerry Adams of Sinn Féin. The person who worked behind the scenes to organise the meeting was Inez McCormack, who died in January aged 69. It was a mark of the woman and her achievements over 69 years of life that such a group assembled at the Elmwood Hall.

In 2006 Inez had founded “Participation and the Practice of Rights”, a group to put human rights at the service of the most disadvantaged members of society. So it was PPR who organised this celebration of the life and work of Inez, reflecting the various stages of her work from the days of her involvement in the civil rights campaign, her trade union activity in particular her concern for the low-paid and in latter years, her dedicated work as a human rights activist.

The theme of the two and a half hour event was “Out of the Ballrooms: peace, participation and equality”. Compered skilfully by the writer Susan McKay, it opened with the launch of the Inez McCormack Fund, set up to support the continuation of her work and to build on her unique legacy.

Her husband Vinny McCormack from Derry said the number and variety of causes Inez gave herself to were remarkable. Irrespective of whether the issue involved an individual, a family or prorecting an institution like the NHS, she gave herself to it body and soul. She reached across all barriers in search of common ground, based upon equality and justice. Vinny’s note in the programme for the event singled out a number of characteristics of Inez:-

“Friendship was her forte; laughter her default; generosity and loyalty were her nature; belief in the best of human nature the ground she stood on“.

President Higgins said he had thought about Inez when he and his wife Sabina had hosted a reception earlier this month at Áras an Uachtaráin to mark International Women’s Day. He told the guests on that occasion that Inez was a passionate and committed human rights activist who fought relentlessly for the creation of a fairer society for workers, for minorities and for women. In her pursuit of a better and more equal world she was never afraid to push against the boundaries of injustice and intolerance, he said.

At the Belfast commemoration he again paid tribute to her dedication and courage. He said: “Her ability to constantly question the status quo demonstrated not only the strength of mind which was such an integral part of Inez’ personality but also the emancipatory thinking that marks out the true progressive; the person prepared to challenge false inevitabilities and question the taken for granted assumptions of the world we inhabit and the future we wish to craft together.” He added: “It takes great courage and moral strength to stand up to the perceived norms within society and to question the bureaucratic controls that can so often stifle progress. It takes enormous determination and persistence to constantly challenge the rigid mindsets that obstruct creative thinking and to refuse to give in to the easier alternative of remaining silent.” 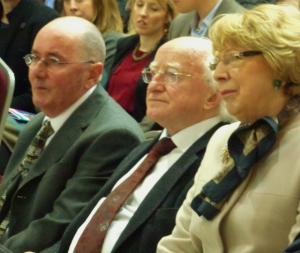 Mary Robinson who said she wore a red jacket in memory of Inez described her as a remarkable and an extraordinary organiser. “Inez was many things to many people, and to me her defining characteristic was her innate sense and belief in the dignity and value of every human being,” she said. “She always challenged what was wrong and worked to secure the rights of people; on many occasions this was without any public recognition as Inez was a very private person.”

The guests were shown a short video by the group “Right to work: right to welfare” which has been holding workshops on the jobs and benefits issues in association with PPR and the Golden Thread Gallery in Belfast, where it will launch a report and an art exhibition based on the experiences of unemployed people at the DHSS office in Great Patrick Street on Monday (25th) at 12 noon.