The popularity of my last blog, one of the most widely read since I started on New Year’s Day, can be attributed not so much to the content but rather to the subject: my younger sister Carolyn. She finishes on Thursday after completing around 35 years’ service to RTÉ mainly in the News and Current Affairs department. Last night her colleagues gathered at O’Connell’s in Donnybrook to say farewell. Those who are of a certain generation might remember it better as Madigan’s, frequented by RTÉ staff both at lunchtimes and in the evenings. 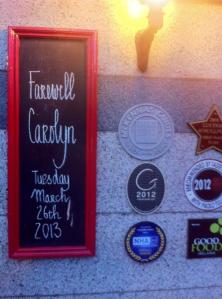 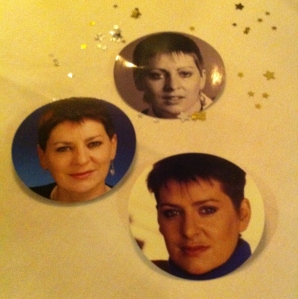 Tom and his staff made guests feel very welcome when they arrived. Some of Carolyn’s  colleagues had put in a great effort to decorate the tables and surrounding area with photographs, including some provided by my youngest brother of Carolyn in her early days. When the video rolled, threatening to open wide the Fishergate files, it asked the question: where did it all start? or words to that effect. But I never heard any mention of London, her birthplace! Like my other two brothers, she was born when my father was working there, first of all as London Editor of the Irish Press and then as Editor of the Catholic Herald newspaper.

In a recent interview with Eileen Dunne, he said that he believed his best work as a journalist had been his coverage from Rome of Vatican II. He began his career in public service broadcasting in September 1967, when he was appointed deputy Head of News at RTÉ in Dublin. His fellow Derryman, Jim McGuinness, who had also been in the Irish Press, had helped to persuade him to return to Ireland at a time when he was working as a freelance and had just finished writing his first book entitled “The Church in Transition”. The publisher was Geoffrey Chapman, who lived a few streets away from us in Wimbledon, in the Sacred Heart parish which the Jesuits will leave later this year.

Miriam O’Callaghan acted as the MC for the speeches, which began with Director of News Kevin Bakhurst, followed by the Managing Editor Current Affairs TV David Nally, whose memories of Carolyn with her spiky hair went back to his student days. A contemporary from UCD days recalled how Carolyn (History, Politics) and her friend Mags brightened up the corridors of Belfield. Now Carolyn’s son Sam has followed her footsteps in Belfield and is currently doing an MA in Archives and Record Management. In the punk rock days, “record” might well have referred to singles, and LPs, of which my brother built up an extensive  collection!

Peter Feeney who I remember from schooldays in Gonzaga College (his brother was in the same class) also spoke in very complimentary terms about Carolyn. Like David, he also mentioned the role my father had played in RTÉ.

Among the attendance was Carolyn’s former boss, Bride Rosney. I happened to meet her in Belfast last Saturday, when she accompanied the former President Mary Robinson, now appointed to a major new role with the UN. Both were attending the celebration for the life of Inez McCormack. 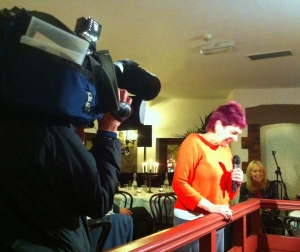 Carolyn joined RTÉ about a year or so before I did. So I reckon she has spent some 35 years there. I worked there for 31 years and my father for 16 years. So between the three of us, we have contributed over 80 years’ service to public service broadcasting in Ireland as well as a few years to the BBC. It was perhaps appropriate that the new Director of News Kevin Bakhurst (ex BBC News) should be the first to be called on to address the farewell gathering. It marked an important chapter in our family history.