Setting off tomorrow (Thursday) on a fundraising 40+ miles walk in the greater London area. It’s called Walk Further for Wimbledon 6 as it is the sixth year such a trek has been undertaken. For me, it is my third year of involvement, having started in April 2011. The idea is to raise funds for our supporter-owned football club AFC Wimbledon and a charity of the walker’s choice. This time any funds for the soccer club will be channelled into a new Community Fund.

My choice of a separate charity is Diabetes UK (NI) via Belfast Lions Club. In February the Club heard from a representative of the group at its monthly meeting in the Wellington Park Hotel. Nearly 76,000 people in Northern Ireland have a health problem related to diabetes. If you wish to make a donation, please do so through my JustGiving page and if you are a UK taxpayer you can add Gift Aid automatically.

I am flying from Belfast International early in the morning and hoped to join the group of walkers about two miles into the walk near Malden Manor station. They will be setting off from the AFC Wimbledon ground at Kingsmeadow, Norbiton but I will not be able to join them in time for a 9am start, so will pick up the trail about half an hour later, as I did at the O2 in Greenwich two years ago.

Some of the walk is along the London Loop, part of which we walked last year on the way to the match at Underhill in Barnet. This year’s destination is Gillingham FC. A full house of around 11,500 is expected at Priestfield, including 1133 Dons’ fans. Gillingham have already won the title but AFC Wimbledon are dangerously close to the relegation zone as their first season (back) in the Football League comes to an end, with only this game and one home game on Saturday week remaining. Last year I raised £442 and £72 Gift Aid for the Lions International Korle Bu eyesight project in Ghana and I would like to thank once again those who donated so generously. In 2011 my participation in the same walk (which took me past HMS Belfast on the River Thames) raised over £200 for another charity supported by Lions, St Dunstan’s, now known as Blind Veterans UK. 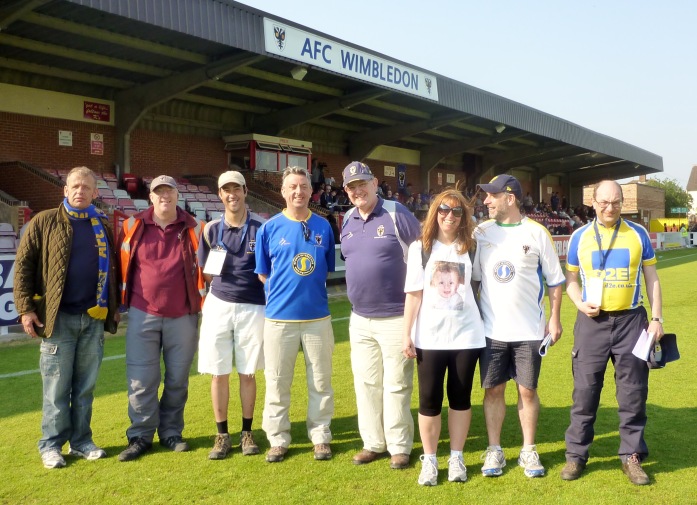 DAY ONE of the walk (Thursday) is the longest section from Kingsmeadow to Whyteleafe, around 19 miles, ending with a hilly section around Kenley airfield. Created by dwarfer77

DAY TWO begins at Pett’s Wood station and covers 15 miles as far as Erith, near Dartford.

DAY THREE will see the group walking 9 miles from Strood alongside the River Thames via Rochester to the Priestfield stadium of Gillingham FC. Follow it here: