It was a packed audience at the BBC’s Blackstaff studio in Belfast as Malachi O’Doherty resumed his Louis MacNeice QUB Writer in Residence series of interviews with media personalities. His guest was the BBC’s Security Correspondent, Frank Gardner. Gardner almost lost his life in a gun attack nine years ago in Saudi Arabia, in which his cameraman was killed, 36 year-old Simon Cumbers from Navan in County Meath. A media fund has been set up to honour his memory.

Simon Cumbers was murdered by gunmen while filming a report on an al-Qaeda militant’s house for BBC Television News in June 2004. The attackers opened fire on Simon and Frank Gardner in a suburb of Riyadh. Simon died at the scene and Frank Gardner, then 42, was seriously injured. He was shot six times at point-blank range. One of the bullets, apparently fired from a jeep, severed Gardner’s spinal nerves, leaving him partly paralysed in the legs and now dependent on a wheelchair. After 14 operations, seven months in hospital and months of rehabilitation, he returned to reporting for the BBC in mid-2005.

Gardner was educated at a private school in Kent, St Ronan’s in Hawkhurst and Marlborough College. His parents were both diplomats and he developed an interest in travel and exploration at an early age. He learned Arabic as a teenager and as a student at Exeter he went exploring with a friend. In the conversation with Malachi  he recalled his “daft” adventure through a jungle to a volcano, without a local guide: two explorers with just a biscuit to share to keep them sustained.

Recalling the attack in which he was wounded, Gardner said the gunmen drove off, leaving him bleeding in the dust. He remembers screaming for help. A crowd came out to look, but no-one lifted a finger to help him. There was no word of sympathy or comfort. This was very different from the welcome he had received in previous years while getting to know an Egyptian family from the backstreets of Cairo, with whom he stayed. 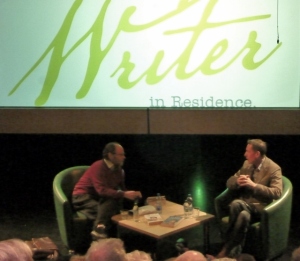 Gardner went back to Saudi Arabia earlier this year and made a documentary reflecting on why the Arab Spring has not happened in the Kingdom. He has worked with the BBC since 1995. Before that he spent nine years working in and around the Middle East region as an investment banker with Saudi International Bank and Robert Fleming from 1986-95. He became the Corporation’s first full-time Gulf correspondent in the late 1990s and set up an office in Dubai. In 2000 he was appointed Middle East correspondent in charge of the bureau in Cairo, but travelling widely throughout the region. In that role he covered the Palestinian intifada and reaction in the wake of the 11th September New York attacks.