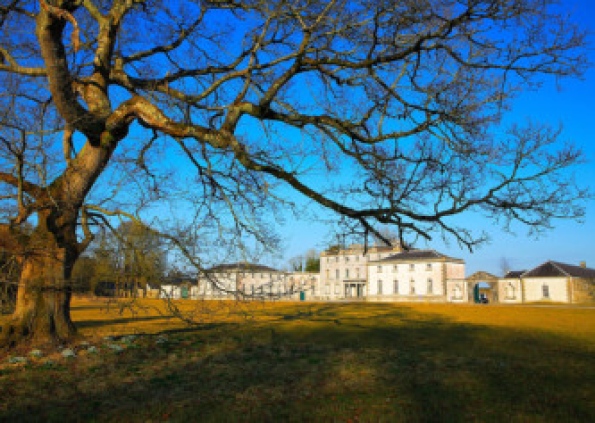 Since TV3 started up as an independent commercial television station in Ireland fifteen years ago, I have not watched many of its programmes. Its news operation has given experience to a new generation of young television reporters, some of whom have moved to other jobs, including positions in RTÉ News. I have occasionally watched Tonight with Vincent Browne, who has often interviewed a school colleague Peter Mathews TD on his programme. The TV3 Chief Executive since 2006 David McRedmond was also educated at the same school in Dublin. He reminded me a while ago that the Vincent Browne programme was available to watch online in the North for those without a suitable aerial. Last month under his stewardship the station opened a new HD studio  at its Ballymount headquarters in Dublin. It has been building up audience figures steadily.

Last night (Monday) I noticed there was a programme on TV3 devoted to “The Big House“, a subject in which I have some interest, having written about the Big House in Fermanagh and Monaghan. The four-part series is centred around Strokestown Park House in Strokestown, County Roscommon. Produced by Big Mountain Productions and co-funded by the BAI, it follows thirteen people as they live and work in Strokestown Park House as servants just as their ancestors did before them.

Jeff Ford, TV3 Director of Content said: “I am extremely excited about this programme which brings alive a significant period of Irish history. For the first time ever, Irish cameras follow people who have a real connection to these beautiful houses, as they re-enact the lives of their ancestors.”  Director of Strokestown Park House John O’Driscoll said: “We are thrilled that Strokestown Park House has had the opportunity to come alive again with the filming of this exciting programme. The house is full of history and the programme allowed us to explore the lives of those who lived and worked in the house many years ago.”

Strokestown Park houses the Irish National Famine Museum, which is currently being redesigned and is partially open to the public. It is due to re-open fully by the end of May.

In the programmes, presenter Bryan Murray (who played Flurry Knox in The Irish RM) is on a journey to discover the controversial history of The Big House in Ireland and to tell the story of the servants, without whom these houses could not have functioned. For 100 years, life has stood still at Strokestown House, with every fixture and fitting remaining as it was. But the big house comes alive as in a social experiment, the series brings back the ancestors of men and women who lived and worked there, to bring to light a hidden history. By digging through the Strokestown Park archives and the census online the programme makers were able to trace the descendants of the Big House, and it is these thirteen people who they brought back to Strokestown to live and work exactly as their ancestors did.

We meet the Massey family from Hill of Down, Co Meath whose relative was the last butler at Strokestown Park House. PJ Massey has vivid memories of Butler Massey and is proud of this working heritage. The Frederick family from London has strong bonds to Strokestown as many of their female relatives worked at the house, while The Watters family’s connection to Lissadell House in Sligo dates back generations. Professor Mary Daly (UCD) said Ireland was now ready to look at this period of our history that as a country we systematically tried to blot from the landscape. Professor Diarmaid Ferriter (UCD) said we can still think about the big house as being a symbol of colonialism but we can also begin to understand that the big house story encapsulates so many different aspects of Irish history and the Irish experience. Professor Terence Dooley (NUI Maynooth), who gave a paper on ‘The big house in Carleton country, 1815-69″ at the William Carleton Summer School in Clogher in 2004 and wrote a book on The decline of the big house in Ireland (2001), is also a contributor to the series.

In one section of the first programme, Bryan Murray visits what is probably the finest example of the Irish Big House, Castletown House in Celbridge, County Kildare. In 1967 the house built in 1722 for Speaker William Connolly was purchased by Hon. Desmond Guinness of the Irish Georgian Society. Thankfully it has been preserved. In 1979 care of the house passed to the Castletown Foundation, a charitable trust which was established to own, maintain and to continue the restoration of the house. In 1994 the house with the exception of the contents, was transferred to State care and is now managed by the Office of Public Works. Professor Dooley in collaboration with Mary Heffernan of the OPW successfully established the OPW-NUIM Archive and Research Centre at Castletown, launched by President McAleese in November 2008.

PJ Massey – Butler Aged 50
Lives in Hill of Down, Co Westmeath
Married with two children Amanda and Patrick, grandfather to two children.  PJ is really into history and has a great knowledge of Irish history, famine, big house and the early 1900s. His hobbies are fishing and shooting, he makes hurls and wheels by hand and he works for Waterways Ireland. PJ’s connection to Strokestown is Thomas Massey – Strokestown’s last butler for 40 years. PJ and his and his nephew and niece are really excited about the experience and are welling with pride about their Uncle Tossy who was a huge part of the fabric of the house. PJ has will make for great television. The Massys will be to The Big House what the Winstons were to The Tenements.

Marie Gillooly – Housekeeper
Aged 46
Married with three children.
Lives in Roscommon  Marie left her job as a HSC manager to become a child minder as she felt this would give her a better quality of life.  She lives in Roscommon and is connected to the big house through many generations of her family. She has documented evidence and information of her great, great Grandmother, Biddy Bowens working there in 1851. In addition to this, almost 130 years later her mother, Mary Bowens, was employed as a nurse in Strokestown Park House to look after Madam Hales Pakenham Mahon and her husband Major Hales. She started work there on 5th October 1979 and finished in 1981 when Madam left for good to reside in a nursing home in England.   Marie is a bubbly fun loving woman and is really interested in her own family history and the history of Roscommon. She has spent a huge amount of her own time researching her family tree and is very contemplative and articulate about her experience.

Helen Burke – Cook
Aged 43
Helen owns Langs Bar and Restaurant in Grange, County Sligo, as well as the local undertakers, and lives with her family above the restaurant. She is a bubbly and attractive woman who is really enthusiastic about taking part in the programme. She is used to running a business that caters for a large amount of people so won’t be daunted by the prospect of cooking for everyone and will be able to draw some interesting comparisons. She is also really keen for the two teenage girls to have the experience. She wonders how they will cope without mobile phones.  Helen’s uncle John and his father both worked in Lissadell House. John also provides first-hand testimonials for the series.

Andy Frederick – Valet
Aged 44
Lives in Kingston, London. Andy used to go up to Strokestown House as a treat on a Friday to see his aunt Bessie who cooked there, his mother Marion also worked there when there were dinner parties at the house.  Andy works as a supervisor for an engineering company in London. He is very articulate and has vivid memories of going to visit his aunt who worked in the house.

Coby Frederick – Kitchen Boy
Aged 10
Lives in London. Coby is really into amateur dramatics so is really excited and not inhibited about the prospect of appearing in the series. He is very cute and articulate on camera. He also likes football, cricket, acting, drawing and writing stories.

Luca Frederick – Junior Footman
Aged 14
Lives in London. Luca hobbies include football, tennis and archery. He has been to Strokestown before but unlike Cody he is slightly more reserved – a bit of a moody teenager, which is in perfect contrast to his brother!

Patricia Rogers – Kitchen Maid
Aged 50
Catering Manager HSE
Patricia Rodger worked in Strokestown House on summer holidays when she was at school. She also picked fruit from the gardens. Her late father Joe Lyttle worked for 50 years for the Pakenham Mahons.

Robyn Lockhart (Ella’s Cousin) – Kitchen Maid
Aged 14
3rd year Junior Cert at Ursuline College, Sligo. Robyn’s hobbies include horse riding, music, friends and facebook. She is very close with her cousin Ella Burke(above) and isn’t looking forward to living without here mobile phone but is looking forward to seeing how young girls lived as servants. Both girls work at Lang’s Bar and Restaurant and Bar in the kitchen and as waiting staff. Robyn’s Granny, Kathleen, worked in Lissadell House.

2 thoughts on “THE BIG HOUSE”