Representatives of journalists in Ireland have been marking world press freedom day. In Dublin the President of the National Union of Journalists Barry McCall demanded action to protect media plurality across Europe. He joined senior NUJ and Amnesty International Ireland figures in laying a wreath at the Veronica Guerin statue in Dublin Castle in memory of all the journalists who have been killed in the course of their work. He said: “It is our duty to ensure that each one of those journalists is remembered. Here in Ireland we know the pain felt by the murders of Martin O’Hagan and Veronica Guerin, both NUJ members committed to the highest principles of journalism. We salute those who have died in the cause of the truth. We also need to protect our ability to communicate the truth on a global basis and across all platforms in the future.” 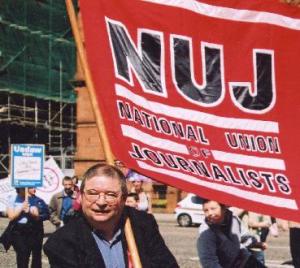 The International Federation of Journalists (IFJ) who will hold their triennial Congress at Dublin Castle next month and the NUJ have also written to the embassies of the four countries in the world with the highest numbers of imprisoned journalists to demand their release. Signed by IFJ President Jim Boumelha the letters have been sent to the embassies of China, Iran, Turkey and Eritrea, to express the IFJ’s concern about the lack of press freedom in these countries, where journalists are routinely detained in violation of  their fundamental freedoms and human rights. As a sign of unity and solidarity, the IFJ is also calling on its affiliates to send similar letters to the embassies of the same countries in their regions. General Secretary Michelle Stanistreet has written on behalf of the NUJ.

At a meeting of Dublin branch in Liberty Hall the NUJ President Barry McCall called for public support for the European Citizens Initiative which calls on the European Commission to bring forward measures to protect media pluralism and press freedom. Mr McCall said: “It is standard practice for governments and competition authorities to intervene when a firm becomes dominant in any sector. But the media industry is even more sensitive to such dominance as with it comes potentially immense political power and influence. This is why different standards and thresholds must be applied to this bulwark of democracy and why the NUJ is supporting the European Citizens’ Initiative aimed at gathering a million signatures to a petition calling on the European Commission to bring forward to protect media pluralism and press freedom. We need 9,000 signatures from Ireland to play our part in this critically important initiative. The NUJ will be campaigning to get its own members to sign up to the petition and we are calling on all trade unions, political parties, and the Irish people generally to get behind it so that we can prevent abuses of media power in this country in future.”

Irish Executive Council Cathaoirleach Gerry Curran told the branch that media freedom involved taking a stand in defence of journalism at home and abroad. Highlighting the fact that the NUJ will host the IFJ World Congress in Dublin next month he said the international focus on Ireland would give the NUJ a special role in highlighting the abuse of journalists throughout the world. NUJ Irish secretary Séamus Dooley joined Amnesty International Ireland in calling for the release of journalists like Ali Mahmoud Othman who are detained in Syria. Noeleen Hartigan, Programmes Director of Amnesty International Ireland, said: “Syria is now the world’s most dangerous place to be a journalist. Scores of journalists have been detained, tortured or killed over the last two years. Others, like Ali Mahmoud Othman are detained in secret locations. Together with the NUJ we are today calling for the release of all journalists detained solely for their work to tell the world what is happening in Syria today.”

In 2012, 84 journalists in 25 countries died while covering the news. On May 13, their names will be added to the Journalists’ Memorial at the Newseum in Washington DC. In Mexico, Adrián Silva Moreno, a freelance journalist and contributor to the newspaper Puntual, was shot to death while covering a raid of a warehouse near Tehuacan. Silva was leaving when his car was fired on by unknown gunmen.

In a ceremony at the Newseum on Wednesday it was revealed that the percentage of the world’s population that has access to a free press declined during 2012, according to an annual survey released by Freedom House, which has documented media independence since 1980. 197 countries were monitored. Of that total, 32 percent were “free;” 36 percent were “partly free;” and 32 percent were “not free.” In 2012, the press status in eight countries changed. Karin Karlekar, project director at Freedom House, said this marked the first time in history that all country changes were in a negative direction.  The worst of the worst countries for press freedom were Belarus, Cuba, Equatorial Guinea, Eritrea, Iran, North Korea, Turkmenistan and Uzbekistan. Three countries — Greece, Mali and Israel — changed from “free” to “partly free” Five countries — Egypt, Paraguay, Ecuador, Guinea-Bissau and Thailand — changed from “partly free” to “not free”. Norway and Sweden remain the most free in the world. Both have constitutions that guarantee press freedom. Newspaper readership is high, and internet access is widely available and unrestricted. For more information on the survey, visit www.freedomhouse.org. I am grateful to fellow blogger Darach MacDonald for bringing it to our attention on facebook.

Also in Dublin, the Irish section of the Association of European Journalists marked world press freedom day with a talk over lunch by the Chairman of the Irish Press Council, Dáithí O’Ceallaigh. 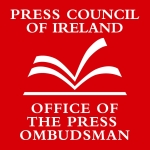