A day for studying unionist and Protestant history. First, another trip by train to Derry/Londonderry, the UK City of Culture. I reported in March on the re-opening of the railway line from Coleraine. This morning the train from Belfast was quite full, many people taking advantage of their 60+ (like me) or 65+ free travel passes, including the group of six other retired people I travelled with. On arrival at the Waterside the free shuttle bus was soon full to capacity, so we ended up walking in the direction of the former Ebrington Barracks site and then onto the Peace Bridge, which some were seeing for the first time.

Stepping onto the City Walls at Magazine Gate beside the Guildhall, it was interesting to see that the iron fence security gates along this section had now been removed, a process that began a week ago. We walked as far as Society Street and our first stop was at the Apprentice Boys of Derry Hall, where we had arranged a tour of the premises. We were shown four short videos about the history of what was described as one of the largest historical and cultural groups in the UK and Ireland.

There are many artefacts inside the building. In the basement, during recent renovation work, four cannons were found concealed behind a wall. There is no date on them. Many items are directly related to the organisation, going back to the Siege of Derry in July 1689, when thirteen apprentice boys shut the gates of the city against the oncoming army of the Catholic King James II of England and Ireland. The History of the Siege of Londonderry 1689, written in 1951 by Cecil Milligan, lists the 13 as: Henry Campsie, William Crookshanks, Robert Sherrard, Daniel Sherrard, Alexander  Irwin, James Steward, Roberet Morison, Alexander Cunningham, Samuel Hunt, James Spike, John Coningham, William Cairnes and Samuel Harvy, all of whom are remembered in various ways by the organisation. 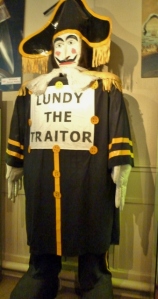 It is hoped to open an extension to the museum within the next few weeks. It was interesting to see preparations already underway for making the huge effigy of Robert Lundy (Governor of Derry), regarded as a “traitor” for wishing to negotiate with King James during the Siege. The figure, stuffed with straw, will be set alight during the annual December celebrations marking the anniversary of the closing of the gates.  In August 1969, the Apprentice Boys’ parade around the walls of Derry sparked off three days of intensive rioting in the city, known as the Battle of the Bogside. The disturbances are widely seen as the start of the troubles in the North. But there is little about this period in either the videos or the displays. Admission to the exhibition costs £3 and tours should be booked with the museum in advance.

While walking through the centre of (London)Derry near the Diamond, the London link suddenly became very real when a familiar red Routemaster bus passed by on the tourist trail. The square windows in the middle of the upper and lower decks show that this was one of the elongated buses built by AEC at Park Royal, which could hold more passengers. They used the designation RML and based on the registration, the number for this bus (although it is no longer painted on the driver’s side) is 2659.

A quick check using a web search revealed that RML2659 registration number SMK659F was brought into service by London Transport in September 1967 and had seats for 72 passengers compared to 64 in the standard design. A further search shows it running on the number 38 route from Victoria to Leyton Green and based at Leyton garage in 1987. In 1995 the bus was operated by Borehamwood Transport on the number 13 route to Golders Green Station from Aldwych.

A friend has just reminded me that the new version of the Routemaster, the so-called “Boris bus” because Boris Johnson began the commissioning process as Mayor of London, has started rolling off the production line at the Wrightbus factory in Ballymena, a town we passed on the rail journey to Derry. A few vehicles each week are being delivered to London. The County Antrim company won a contract worth £180m to supply 600 of the vehicles to Transport for London over the next three years, which works out at £300,000 per bus. If you are driving along the M2 motorway you might spot some of the distinctively coloured vehicles being driven from Ballymena towards Belfast for the ferry to Britain.

Route 24, which Metroline operates between Pimlico and Hampstead Heath, will become the first to operate exclusively with new bus for London vehicles starting on Saturday 22nd June. It runs 24 hours a day from Hampstead Heath to Pimlico, via Camden, Trafalgar Square, Parliament Square and Victoria. During peak hours, 27 of the new buses (and five spares)will be in passenger service to carry the 28,000 people who use the route daily. After route 24, another route will be converted in the autumn.  In total around 90 new buses will be delivered to TfL in 2013.

The 600 buses represent a 200 per cent increase in the current hybrid bus fleet which is set to grow by a further 180 vehicles already on order and boosted by a commitment to deliver 600 conventional hybrids over the next three years.  When the final batch of new bus for London vehicles is delivered in 2016 more than 1,600 hybrid buses (representing around 20 per cent of London’s 8,500 strong bus fleet) will be in service on the streets of London.

Many components of the new bus, including engines, chassis, superstructure and seats, are manufactured in the UK.  The order of components from companies across the UK will also further stimulate the economy. The order represents the largest order of hybrid buses ever placed in Europe and will deliver significant environmental benefits, reducing CO2 emissions in the capital by capital by almost 20,000 tonnes a year. Transport for London has confirmed that independent emission testing of a prototype vehicle has shown that this is the cleanest and greenest bus of its type anywhere in the world.

The Mayor of London, Boris Johnson, said: “I am delighted that our first gleaming new buses have driven off the production line, through the gates of Wrightbus and are now London-bound.  These fabulous machines meld the very best in design, engineering and green engine technology.  I believe they will be hugely popular with passengers and they will be joined by hundreds more of their brethren in the coming years.”

Boris must be very interested in these buses because on Friday 10th May he returned to Northern Ireland to open a new plant in Antrim where the chassis of the vehicles is produced. Forty people are currently employed there but the BBC reports this is expected to increase to ninety. Boris also visited the main Wrightbus plant in Ballymena.

Update: On Saturday June 22nd, the first of the “Boris buses” entered service on route 24.

One thought on “UNIONIST HISTORY & ROUTEMASTERS”