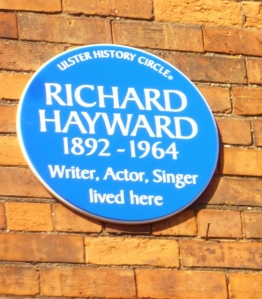 Nearly 160 blue plaques have been erected over the past thirty years by the Ulster History Circle. The latest is on the Antrim Road house in North Belfast where Richard Hayward lived. The plaques mark locations where famous men and women were born, of have lived or worked. They are distinguished people from the arts, literature, stage and screen, academia, medicine, science, industry, the military and other callings. Former BBC journalist Paul Clements spoke at the unveiling ceremony.

Hayward fitted into a number of those categories as a writer, actor and singer. The Ulster History Circle gives some details of his biography. He was born on 24 October 1892 in Southport, Lancashire, a son of Captain Scott Hayward, yachtsman and boat designer, and Louise Eleanor. The family moved to Ireland about 1894 and lived briefly in Larne, Co. Antrim, before settling in nearby Greenisland, and Richard and his three brothers were educated at Larne Grammar School.

Hayward’s first work was in connection with ship repair and maintenance in Liverpool. After world war I he became a sales representative, travelling throughout Ireland. On 9th July 1915 he married Wilhelmina (known as Elma) Nelson (1896-1961). They lived on the Antrim Road and had two sons, Dion Nelson and Richard Scott. 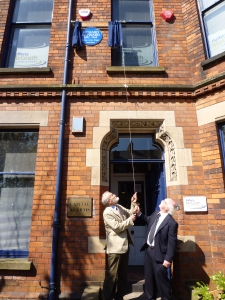 When in his twenties Richard and Elma began acting with the Ulster Literary Theatre. He also worked for a time at the Gaiety Theatre in Dublin. In 1929 Hayward and J. R. Mageean founded the Empire Players (the Belfast Repertory Theatre Company) at the Empire Theatre, Belfast. They performed many of shipyard playwright Thomas Carnduff’s works, and Hayward hoped that a permanent home would be found for the company, creating a vital theatrical force comparable to the Abbey Theatre in Dublin. However Belfast was not yet ready for this and the Empire Players was wound up in December 1937.

When the Northern Ireland station of the BBC opened in Belfast in 1924, Hayward was one of the first artists to broadcast. He and Elma were soon taking part in scenes from Shakespeare and, with Tyrone Guthrie, Hayward founded the Belfast Radio Players. In 1924 Hayward started making gramophone records. By 1950 he had produced more than 140 recordings. These were mainly recorded by Decca and included such popular local classics as “The Ould Orange Flute”, “My Lagan Love” and “The Inniskilling Dragoon”. In 1933 he recorded “The Protestant Boys” with the famous orange song “The Sash My Father Wore” on the “A” side. A recording can be found on youtube.

Hayward’s untrained singing voice gave his recordings an informal ballad-like quality, and this added to their popularity. His first involvement with films was as a singer and actor including The Voice of Ireland (1932) and other similar films in the 1930s. Hayward even had a small part in The Quiet Man (1952) and was also co-producer of The Luck of the Irish (1935).

Hayward’s first publication was a book of poems in 1927, followed by a novel Sugarhouse Entry (1936). Two years later he produced In Praise of Ulster which established his reputation as a descriptive writer. Its success lay in its blend of local history archaeology and folklore, giving a broad and enthusiastic picture of the village or area. After this came Where the River Shannon Flows (1940) The Corrib Country (1943), and In the Kingdom of Kerry (1950). Hayward’s almost total exclusion of religion, politics and the bitterness which colours much of Irish popular history contributed to the widespread appeal of his writings. Publication of the series of five books, covering the four provinces of Ireland was spread over the remainder of his life, culminating in Munster and the City of Cork only a few months before his death. The series was illustrated with pencil drawings by Raymond Piper, producing probably the most satisfactory of his many collaborations.

Hayward’s last activity of note was with the Belfast Naturalists’ Field Club, which he joined in 1944. He was elected president for 1951-2. Public recognition of Hayward’s work included the award of an honorary DLitt from Lafayette University in Pennsylvania in 1959 and an OBE in 1964. Following the death of Elma, Hayward married Dorothy Elizabeth Gamble on 23rd February 1962. He died near Ballymena on 13th October 1964, having suffered a heart attack while driving. He was cremated and later a memorial service for him was held at St Anne’s Cathedral in Belfast.