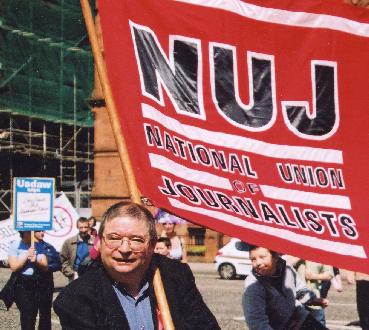 Last week I wrote about the case of NUJ colleague Martin O’Hagan, shot dead by the LVF in Lurgan in September 2001. We remembered him and other journalists who had been killed in the course of their work during the IFJ Congress at Dublin Castle. In January the Northern Ireland Director of Public Prosecutions Barra McGrory announced there was to be no prosecution regarding his killing.

Yesterday in Belfast (June 11th) there was an interesting development when, according to a BBC report, also carried on the RTÉ 6:01 news and on UTV, Mr McGrory revealed that the Public Prosecution Service has referred the case of  Neil Hyde back to court amid allegations that he did not tell the “full truth” in his dealings with the authorities. In January last year Hyde signed a contract with them under the Serious Organised Crime and Police Act to become an “assisting offender”.

The loyalist supergrass testified against those allegedly responsible for murdering the Sunday World journalist. In return, his 18-year sentence was reduced to three years. He pleaded guilty to 48 offences, including drug dealing, arson, possession of firearms and withholding information in connection with Mr O’Hagan’s murder.

Mr McGrory told a news conference there was sufficient evidence that Hyde had knowingly breached the terms of his agreement. He added: “It’s in the interests of justice that the case be referred back to the original sentencing court.” Papers have been lodged and a judge will decide later this year whether Hyde broke his agreement and will review his sentence. It is believed to be the first time in the UK that a case of this type has been referred back to court.