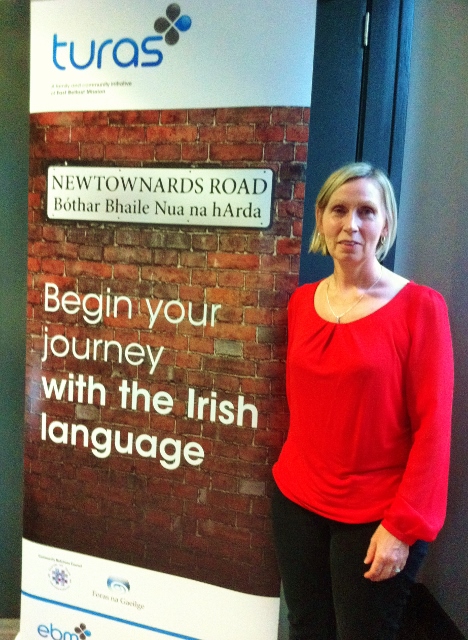 ‘Fáilte roimh’ were the Irish words of welcome Linda Ervine used at the start of her interesting talk in the heart of loyalist East Belfast. The venue was the ‘Skainos’ centre on the Lower Newtownards Road. The name comes from the Greek word for tent or dwelling. Skainos speaks of the importance of practical engagement with a community by figuratively pitching a tent in its midst, and it hints at the notion of hospitality and the extended family. The East Belfast Mission (Methodist church) has been closely involved with the development of this cross-community facility. 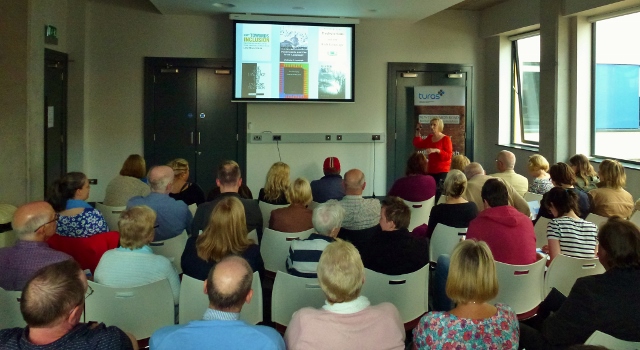 This area is known as Ballymacarrett. As Linda points out, Irish names are all around. It comes from Baile Mhic Gearóid meaning “MacGearóid’s settlement”. Linda started her ‘turas’ meaning journey or pilgrimage or even tour about the Irish language a few years ago after the death of her brother-in-law David Ervine, former leader of the Progressive Unionist Party who had served time for a UVF-related offence in the Maze prison, where he came under the influence of Gusty Spence. Gusty had an interest in the Irish language (Gaeilge) and wore a silver fainne in his buttonhole, awarded to Irish speakers.

That story was one of the many surprises Linda had for most of her audience. She went on to explain how she had done some research on David’s family in the 1911 Census. There she discovered his grandfather John Ervine, then aged 36, living at Frome Street off the Newtownards Road and not far from the Skainos centre. He was head of the family at the time and he and the rest of them were entered as being able to speak Irish and English, as well as being able to read and write. Update: it has been pointed out that if you look closely at the actual census record by enlarging it, there is a fine line drawn through the words ‘Irish & English’ by the census enumerator, in the entry for the Ervine family and those in the same street. 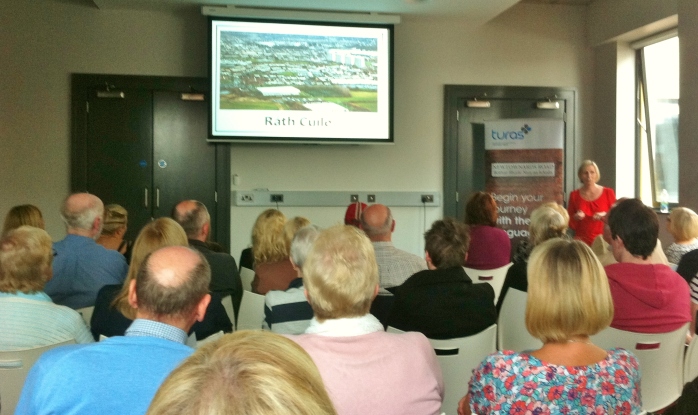 Explaining the derivation of Rathcoole (loyalist estate): Ráth Cúile: nook of the ringfort

Linda is Irish Language Development Officer for East Belfast and is based at the Skainos Centre. She  started learning Irish two years ago as part of a cross-community project with women from the nearby nationalist Short Strand. Now she runs five classes a week for beginners as well as lower and upper intermediate level, delivered by three specialist teachers. It is supported by Foras na Gaeilge, and there is a growing demand for more. Linda is passionate about helping Protestants, unionists and loyalists to dis 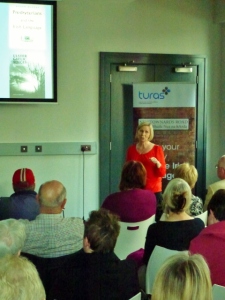 Linda has found much useful background material in the publications of the Ultach Trust, such as ‘A History of Protestant Irish Speakers’. She referred to the Reverend John Feeley, a Wesleyan preacher who went round the country on horseback, died in Holywood in 1860 and who is buried at a church on the Newtownards Road:-

“The foremost Methodist preacher in Irish was Gideon Ousely (1762-1839) from Sligo, who at the height of his powers travelled 4,000 miles a year, preaching about 20 times a week. He was accompanied by John Feely (Seán Ó Fithcheallaigh), who had trained to be a Catholic priest, and thus guaranteed curiosity wherever he appeared. Together they were known as the ‘black caps’ because of their close-fitting skull caps designed to protect their heads from stones; Ousely preferred to stand in front of apothecaries’ windows to deter missiles (Hempton and Hill 1992: 41). Ousely’s strange clothes, comical leer (the result of a shooting accident), and habit of ringing a bell to announce his arrival also ensured large audiences“. 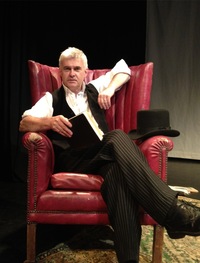 Linda mentioned other leading Irish speakers in the 19th Century who were Protestants: Robert McAdam a Presbyterian who is remembered in the former Presbyterian Church on the Falls Road in West Belfast, now known as the Cultúrlann McAdam Ó Fiaich. His story ‘SEO Robert: The Search for Robert McAdam’ will be presented by the Aisling Ghéar theatre company on Sunday evening at the BMC Tower Street campus as part of the East Belfast festival at 7:30pm. Admission £5. It is a one-man show by Noel McGee directed by Bríd Ó Gallchoir and is mainly in English, with some Irish which is translated by the performer. McAdam was involved in setting up a library, a harp society, a museum and a literary society. He designed and mended steam turbines, made the windows for the Pasha’s Palace in Cairo and still found time to compose music and amass one of the largest collections of Irish cultural treasures on the island.

Having given her audience an interesting introduction to the use of Irish in Northern Ireland where 95% of placenames are derived from Gaeilge, Linda ended on an amusing note. For those who seek to use the republican slogan “Tiocfaidh ár lá”, or “our day will come”, there should be one response: “Ní ghéillfimid”, meaning we will not yield, or in the local version as demonstrated in this final slide featuring senior DUP and Sinn Féin figures,”No surrender!”. 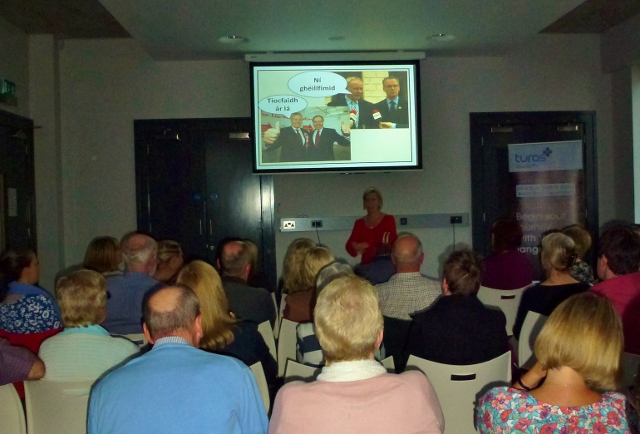 How to say “No Surrender” in Irish!