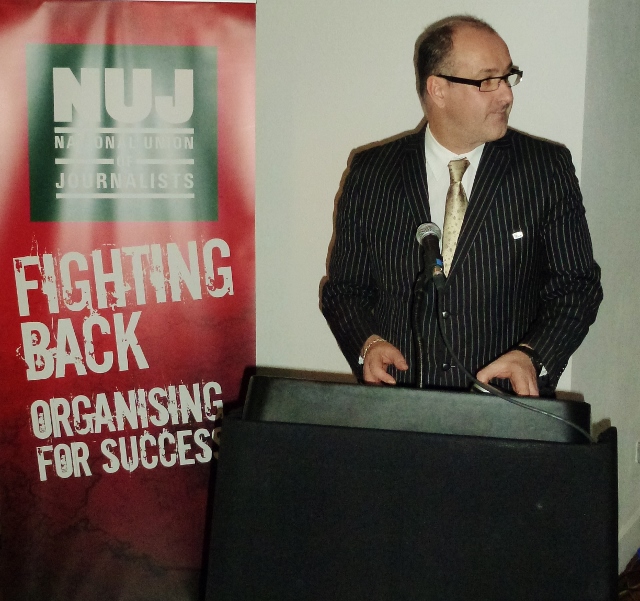 Conferences for the NUJ in Ireland are held every two years. The wider union is also moving to a two-year cycle for the Delegate Meeting, which had already been shifted to an eighteen months interval in order to save money. The next DM will be held in Eastbourne in April and motions for it need to be submitted to our branch meeting by midday on Friday week (22nd November). Please contact Branch Secretary Gerry Carson.

On Saturday, ICTU President John Douglas addressed the NUJ in Ireland biennial delegate conference, which was held once again in the Cusack stand conference centre at the GAA headquarters at Croke Park. Another meeting was being held on the same level in a different section further along the corridor and above the GAA Museum on the ground floor.

From our vantage point we could see that repair work was continuing on the pitch to protect it during the winter. In the Hogan stand, groups were being taken on tours of the impressive stadium.

The NUJ website contains some details of the proceedings. Good to see that the government has withdrawn amendments relating to the Freedom of Information legislation that would have introduced new charges.

The union called for immediate publication of Irish government proposals for legislation guaranteeing workers the right to collective representation and bargaining. The NUJ also called for the appointment of a Minister for labour affairs of cabinet rank in order to give greater priority to the rights of workers.

In his report to the conference, Séamus Dooley, NUJ Irish Secretary, said the official commemoration of the 1913 Lock Out will be remembered as “a hypocritical charade”, if the government commitment to publish legislation on collective bargaining is not honoured by the end of this year. He said the inadequate protection for workers and the absence of the legal right to collective representation is a scandal which cannot be ignored. The NUJ and SIPTU, through the ICTU, are preparing a complaint to the Geneva-based International Labour Organisation on the denial of the right to representation.

The report highlights the failure of successive governments to honour commitments to bring about legislative change to protect freelance workers. In the report, Séamus Dooley says:

“We consider the failure to implement the solemn commitments regarding the right of freelance workers to collective representation through amendment of Competition Law as a betrayal. It is ironic that the state should celebrate the contribution of Larkin, who organised self-employed workers, but force unions to seek relief through the ILO after more than a decade of broken promises,”

The last national agreement, Towards 2016, contains a specific commitment to reform of competition law which still has not been honoured. The union is also calling for the establishment of a minister for labour affairs of cabinet rank as a means of ensuring that employment rights are given greater priority, a call first made by the NUJ in 2007.

The NUJ conference also passed two motions dealing with the ‘JobBridge’ programme. In his report, Séamus Dooley called on the government to abandon the scheme. He said there was clear evidence that JobBridge was being used by a range of media organisations as a source of free labour.

One thought on “NUJ IRELAND BDC”