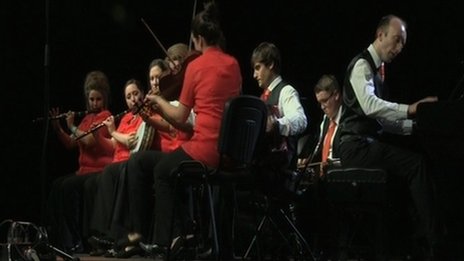 One of the most successful events during London/Derry’s year as UK City of Culture, apart from tonight’s announcement of the Turner Prize winner, was the staging of the All-Ireland Fleadh Cheoil na hÉireann, the first time this great traditional music competition was held in Northern Ireland. It was marked by a documentary on BBC Northern Ireland called ‘Fleadh‘, that was filmed, produced and directed by Sean McGuire with Paul McGuigan as Executive Producer. 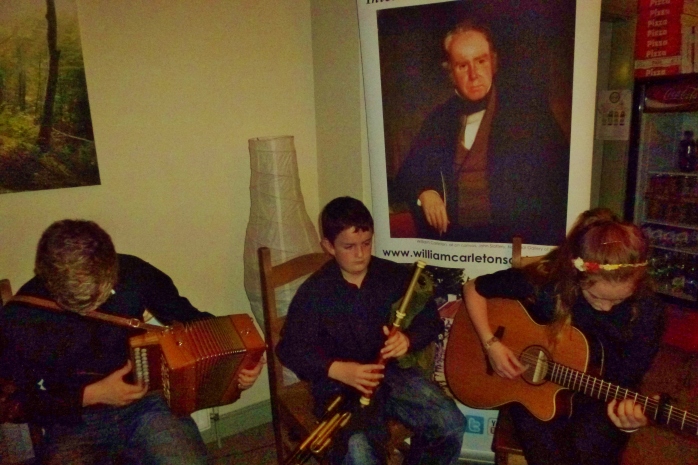 One of the groups appearing on the programme was the McKenna family from Clogher, who were competing in various categories. Peter plays the uilleann pipes. They are all very talented musicians, led by their father Martin. They performed during the William Carleton summer school at Somers café and caravan park at Fardross, Clogher, where they were joined by two pipers Frank Gildernew and Jim Brady as well as the Ulster-Scots Juvenile Pipe Band, who hold their practice sessions there. 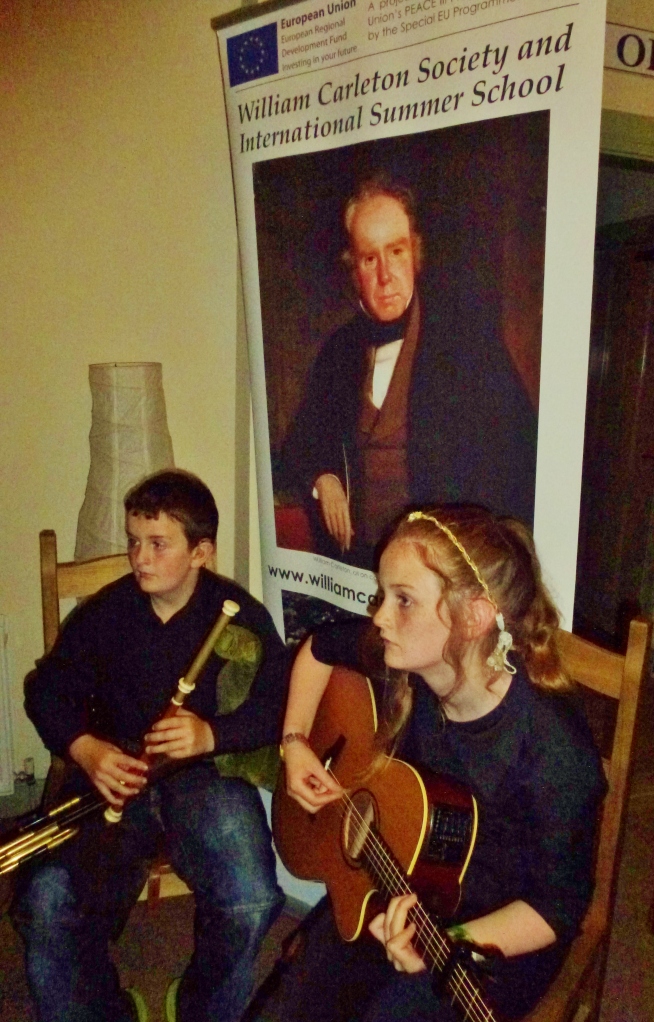 The BBC reported how every year hundreds of thousands of people gather for this festival of Irish traditional music, and for one week in August, Derry reverberated to the sound of fiddles, tin whistles and banjos. Organisers estimate that more than 400,000 people were at the fleadh over the course of the week, while 20,000 musicians were performing, whether on the big stages or in the streets and the city’s walls.

While the casual observer might have got swept up in the revelry, there were higher stakes involved for many of the musicians who had spent months and years fixated on winning a coveted all-Ireland title. It has been described as the Olympics of traditional music, and a new documentary goes behind the scenes to capture the pressure and tension at play when all those hours of practice come down to one nerve-wracking performance.

The programme charts the progress of a number of performers as they compete against hundreds of other hopefuls, first at county level, then at provincial level, in the hope of winning through to the main event. One of them is accordion player Justin Quinn, who likened the experience to “running down a hill faster than you feel comfortable”.

Justin grew up in Leeds but his parents are from Pomeroy in County Tyrone and Irish traditional music played a big part in his upbringing. While he won an all-Ireland title at the age of 14, he gave up the instrument when he went to university and did not return to it for another 20 years.

“The competition itself is awful – having everything relying on five minutes, whether you forget the tune halfway through,” he says.

That pressure is echoed by accordion player Christopher Maguire, who says that by the time musicians have gone through provincial heats to reach the fleadh, everyone is of a high standard.

“You’re in this massive room, and everyone’s watching you they’re like policemen for music, and you just have to perform your best. You have to know the song, you have to put feeling into the tune and imagine you’re singing it, you’re actually in the accordion,” he says.

While the world of traditional music is a close-knit community, friendships are put aside for a few hours while musicians do battle in front of the adjudicators. The programme’s producer and director, Sean McGuire, says the fleadh is about more than winning medals. Although there’s a competitive spirit, he says what he found in this world of music was friendship and camaraderie, along with  a lot of joy.