The improved relationship between the British and Irish governments was again shown today by the joint visit to some of the World War I battlefield sites in Flanders by the Taoiseach Enda Kenny and British Prime Minister David Cameron. They paid their respects at the grave of nationalist MP from the Irish Parliamentary Party, Major Willie Redmond.  He was commissioned as a captain in the Royal Irish Regiment and fought on the Western Front with the 16th (Irish) Division, in the winter of 1915 to 1916, and died during the Messines Ridge attack in June 1917.  Lise Hand reported on the visit for the Irish Independent. 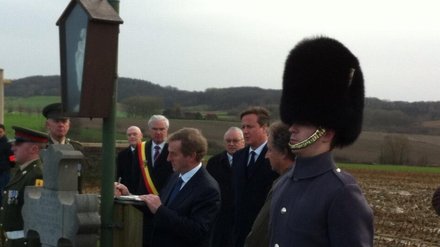 They also visited the Irish peace park at Messines, the first time the heads of the two governments have done so. Each laid a wreath close to the round tower that dominates the site. Mr Kenny and Mr Cameron also saw Wijtschate military cemetery, south of Ieper, where there is a memorial to the 16th (Irish) Division.

A bronze plaque near to the entrance of the Island of Ireland Peace Park is inscribed with a Peace Pledge:

“From the crest of this ridge, which was the scene of terrific carnage in the First World War on which we have built a peace park and Round Tower to commemorate the thousands of young men from all parts of Ireland who fought a common enemy, defended democracy and the rights of all nations, whose graves are in shockingly uncountable numbers and those who have no graves, we condemn war and the futility of war. We repudiate and denounce violence, aggression, intimidation, threats and unfriendly behaviour.

As Protestants and Catholics, we apologise for the terrible deeds we have done to each other and ask forgiveness. From this sacred shrine of remembrance, where soldiers of all nationalities, creeds and political allegiances were united in death, we appeal to all people in Ireland to help build a peaceful and tolerant society. Let us remember the solidarity and trust that developed between Protestant and Catholic Soldiers when they served together in these trenches.

As we jointly thank the armistice of 11 November 1918 – when the guns fell silent along this western front – we affirm that a fitting tribute to the principles for which men and women from the Island of Ireland died in both World Wars would be permanent peace.”  (from www.greatwar.co.uk website)