I am taking a trip back in time across the Irish Sea. My first journey for 2014 involves a flight to Birmingham this afternoon (Thursday). A good friend died after Christmas and his funeral is tomorrow (Friday) at Robin Hood Crematorium. My obituary for Howard Waldron (RIP) will hopefully appear after I have spoken at the service.

With Marie & Howard Waldron & Dave Ireland on the walls at York, where we parted for the last time in June 2013 Photo: © Evelyn Fisher

Howard and his (then girlfriend) Marie were among the friends I got to know in Birmingham when I came to work there for BBC Radio Birmingham (now WM) in 1975. Elsewhere on these pages you will find my story about the Boomtown Rats, one of the many Irish groups I got to meet. The Dubliners and Horslips are among the others I interviewed at Pebble Mill, one of the finest broadcasting centres in England, sadly now demolished.

My journey on Friday evening will bring me back to London, where I grew up (1954-67) and where my younger daughter is now based. On Saturday I will get the first chance this season to see my football club AFC Wimbledon in action. They take on Torquay at Kingsmeadow in League 2. At the moment the Dons are in mid-table and hopefully after a good 3-0 win last weekend they can build on that form as the last thing we need is another end-of-season relegation scenario. 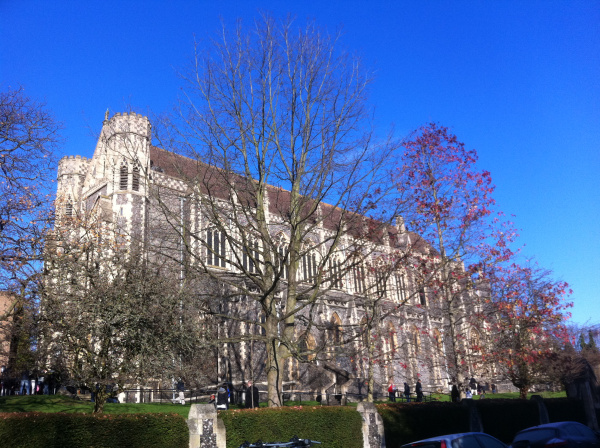 As it happens, this is also a very important weekend for the Sacred Heart parish in Wimbledon where I used to live and go to school. After running the parish for over 100 years since they founded it in 1887, the Jesuits are handing over the administration to the Archdiocese of Southwark at a special Mass on Friday evening. The new Parish Priest is Monsignor Nick Hudson, a former Rector of the English College in Rome, who was ordained a priest in Wimbledon. There will still be a Jesuit presence in the parish, however, both at the schools (Donhead and Wimbledon College), at Jesuit Missions in Edge Hill and at a nearby Jesuit residence.

One of the reasons the Jesuits are handing over what was regarded as their most prestigious parish in England and Wales is the lack of voacations. They do not have the manpower to continue serving the normal parish needs. It is therefore interesting that my current parish of St Brigid’s in South Belfast will shortly be welcoming a Jesuit who is at his Tertiary stage, a period of reflection and parish experience that comes after ordination and before he makes his final vows.

Fr Nick Austin is a college professor lecturing in moral theology in London. He is a native of Coventry, an area I explored soon after I moved to Birmingham in 1975, visiting the Anglican Cathedral. It was bombed during the second world war but a new structure was designed for the 20thC and was consecrated in 1962. By coincidence I met at a friend’s house in Wimbledon on another occasion a relative of the late Keith New (died February 2012), who designed some of the stained glass windows for St Michael’s Cathedral. Coventry was also a city where Howard Waldron used to work.

The wheel will come full circle when I travel to Dublin next week, on my return from England.