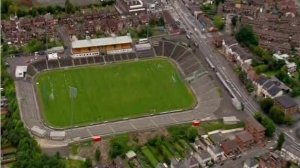 A judge has now given his decision about the controversial plans to revamp Casement Park GAA grounds in Andersonstown, West Belfast. The NewsLetter reports that planning permission for the 38,000-seater stadium has been overturned after some local residents objected.

Mr Justice Mark Horner gave a decision at Belfast’s High Court. He said: “I have decided to quash the decision.” Earlier  he highlighted a number of serious flaws in the decision to give the plans the green light and said Stormont environment minister Mark H. Durkan’s decision to grant permission was unlawful.

He identified failures in the environmental impact assessment of the larger stadium and said there had been a reliance by the Department of Environment on an inaccurate figure of 32,600 capacity as a baseline for the project. The effect of huge crowds on the road network to the stadium was also not properly considered, according to the judge.

A residents’ group took legal proceedings against Mr Durkan’s decision to approve the £77 million redevelopment. The Mooreland and Owenvarragh Residents’ Association argued that their homes would be dwarfed by the new stadium. Outside the court, Carmel McKavanagh, representing the residents, said it was now up to the GAA to consult them.

“We are delighted at the verdict but also sorry that it has come to this stage. We could have avoided all this hassle, the court case and the cost to everybody concerned if the GAA in particular had listened to us. Most of the defects the judge pointed out were serious ones, they were not half-hearted ones, they were very serious issues that we put to the GAA and planners a long time ago. We have always said we are not against the development of Casement Park, just the size and scale of it”, she said.

Chairman of the GAA’s Casement Park Project Board, Tom Daly, said he was disappointed. He noted the judgment found the siting, size and scale of the Casement Park development were not contrary to planning policy.

“There is a strong resolve within the GAA to submit a new planning application in 2015 which will again follow the due process and scrutiny of the Department of the Environment. This is in keeping with the GAA’s strategic requirement of developing a fit-for-purpose, modern provincial stadium for Ulster at Casement Park. “Ulster GAA remains committed to working with the local community to see the completion of a world-class stadium which has far-reaching benefits for all”, he said.

The North’s Sports Minister Carál Nί Chuilίn said: “I am aware that the GAA offered a number of solutions which sought to address the issues raised in the judgment and I am disappointed that no accommodation was reached. The GAA have indicated that they will lodge a fresh planning application which will take account of the points raised in the judgment and I and my department will fully support them during the new planning process.”