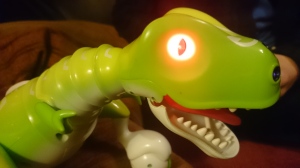 Meet my new acquaintance. Boomer Zoomer, the robot dinosaur. I suspect Santa must have been busy delivering these toys aound Ireland and elsewhere for Christmas Day. A similar toy Teksta T-Rex appeared on the annual RTÉ Late Late Show recently.

Thanks to a nephew I was able to explore some of the capabilities of this dinosaur. He will gladly chew a bone or even your finger. If he is enraged his eyes will turn to red! 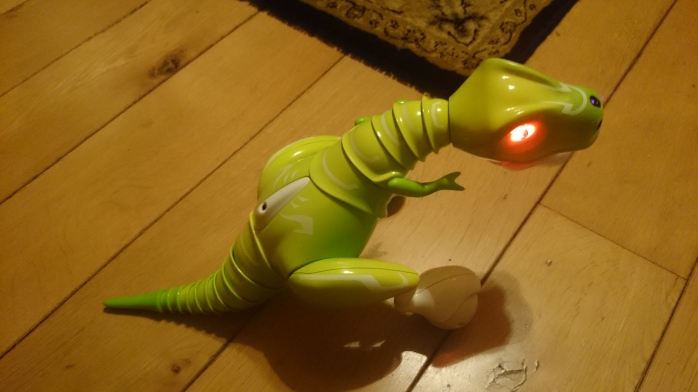 The toy is very versatile and comes with a remote, but can also be set in motion without this device. Here are some of the specifications:

A pre-historic pet for the modern age! Boomer is a robotic dinosaur pet that can chase, chomp, guard and of course – ROAR! His eyes change colour with his mood, so make sure you give him all the attention he needs. Standing up on two wheels, he uses ‘True Balance Technology’ to zoom around and maintain balance. You can use your hands to tame him and build up a friendship and make him your loyal pet. Try and control him with the control pod, or even make him dance! But beware – you may lose control! With tons of cool features Boomer is the ultimate pre-historic robotic pet!

The robot dinosaur has a super cool and playful personality. This interactive robot dinosaur is almost like a pet and just loves to have fun with kids. It is usually cool but when he gets angry he gets wild which drives kids go wild with more excitement.

This dinosaur toy moves around deftly balancing itself on its two legs with smooth head, neck and tail movements thanks to the Balancing Technology (TM) it possesses. The best part is that it responds to hand gestures. It is a great learner; the more you play around with him the quicker he responds to your commands. You can also command it with a remote control.

Boomer has multiple joints in his neck and he can swing his head from side to side. Same goes for his tail which again is pretty flexible for him to swish merrily. He can open his mouth to display his emotions while he moves around to keep everybody entertained. This charming robotic toy emits realistic sounds which adds to the excitement. It is a rechargeable toy, but the remote does need a battery.

So now you have met my latest Christmas visitor. Luckily the child in question did not receive the burping and farting version of Boomer, which is also available! 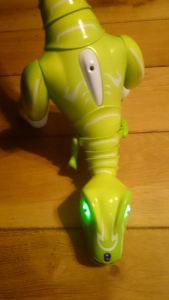