UUP leader James Molyneaux being filmed at a rally by my former colleague RTÉ News cameraman John Coughlan. Judging by the camera, it looks like mid-1980s.  Photo: Press Association/BBC website

I was sorry to hear of the passing of the former Ulster Unionist Party leader (1979-85), Lord Molyneaux. He was always a very courteous man, willing to give interviews to RTÉ News to put across his party’s position. He never came across well on television, however, but that did not bother him much, I reckon. A few years before I retired (so that must be at least six years ago) a former reporter passed on a hint that Jim (as he was usually referred to) was on his last legs and that it might be time to prepare an obituary. Thankfully he remained with us for many more years and died at the age of 94.

Among the things that I remember about Lord Molyneaux are that he served during the Second World War in the Royal Air Force and was among a group of Allies that liberated  Belsen concentration camp in 1945. There is a very powerful description of this event in a documentary made by the BBC a few years ago. He was an Orangeman, who served for a time as Sovereign Grand Master of the Royal Black Preceptory (1971-95).   He was from Killead, beside Aldergrove in County Antrim. While his health allowed him, he used to join in the choir on Sundays at the local parish church beside the former RAF base. The BBC’s Mark Devenport has filed a very good obituary on their website. 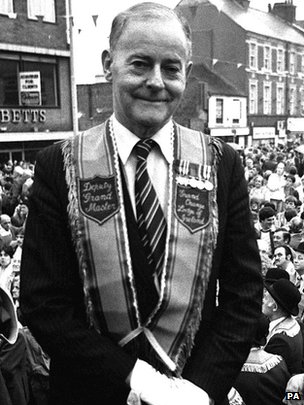 His political career spanned more than three decades. He joined the party in 1946 and went on to become one of its longest-serving leaders from 1979 to 1995. At the end of World War Two, he was among the first British troops to enter the newly liberated Belsen concentration camp in Germany. He was knighted in 1996 and was granted a life peerage in the 1997 Birthday Honours list, becoming Lord Molyneaux of Killead.

Ulster Unionist Party leader Mike Nesbitt said: “He brought a stability to the unionist party at a time when it was much needed. “Times were fraught, not just in terms of the exceptional level of barbaric terrorism that was being imposed upon the people of Northern Ireland, but this very difficult political situation where the then-prime minister Margaret Thatcher was persuaded to sign the Anglo-Irish Agreement with the government of the Republic of Ireland, which was incredibly destabilising for Northern Ireland.”

James Molyneaux held his party together in the face of a continued challenge from DUP leader Ian Paisley. He was MP for South Antrim from 1970 to 1983 and for Lagan Valley from 1983 to 1997. In 1979, he succeeded Harry West as UUP leader.

Lord Trimble, who succeeded Lord Molyneaux as Ulster Unionist leader in 1995, said: “He was one who did things quietly and consensually – there was plenty of discussion about the way in which things were evolving – there was a collective leadership and it was effective.”

Current DUP leader Peter Robinson said Lord Molyneaux was “first and foremost a committed unionist”.
“Through his service in the RAF in World War Two and 27 years as a member of parliament, he was marked by a quiet determination and diplomacy,” he said.
“Jim’s leadership encompassed many difficult years for unionism and his skills were key to ensuring that the Ulster Unionist Party held together when there were competing viewpoints about how to move forward.”

Former Prime Minister John Major described Lord Molyneaux as one of the “unsung heroes of the peace process”. Secretary of State for Northern Ireland, Theresa Villiers, paid tribute to his “fortitude, courage and unswerving commitment to democracy”. “It is right that we remember his distinguished years of public service, as a parliamentarian and leader of the Ulster Unionist Party,” she added. “In that role he helped to steer Northern Ireland through its darkest days from the 1970s to the 1990s and for that we should all be grateful.”

President Michael D Higgins said Lord Molyneaux became an “icon in the Unionist tradition” and would be missed by many “who were appreciative of a life devoted to public service and the world of politics”.  Sinn Féin president Gerry Adams said: “Famously, he described the 1994 IRA cessation as one of the most destabilising events for unionism and the Orange state since partition, and he campaigned against the Good Friday Agreement. “We had obvious and strong political differences, but this is a sad time for Mr Molyneaux’s family and friends and I wish to extend on my own behalf and that of Sinn Féin our condolences and sympathy to them.”

Ulster Unionist assembly member Danny Kennedy said: “He fought for our nation in war, and gave strong and determined leadership in the most difficult period of our country’s history. “He was highly regarded and respected as leader of our party, and his legacy remains in the values he represented and passed on.”
Former Ulster Unionist MP Lord Kilclooney said: “He was a quiet man of politics, but a very genuine gentleman who gave great leadership to the Ulster Unionist Party at a time when it was riven by division.”
Pat Ramsey of the SDLP paid tribute to Lord Molyneaux’s “distinguished career”. “For many years he was a household name and a key player in Northern Irish politics,” he told the Assembly.

Alliance Party leader David Ford said Lord Molyneaux’s experience at the liberation of Belsen “must have touched him enormously and gave him a commitment and drive for public service”. He told the Assembly: “He was the leader of his party for 16 years, something that few of us in this chamber can appreciate exactly how he managed to do this, and he certainly had an impact over some of the most turbulent years in this region as he carried through that role of leadership.”
TUV leader Jim Allister said: “He was a giant in our political scene who moved through it in that quiet, unassuming way that characterised him, and he was above all, a unionist through and through.”
Ulster Unionist Party chairman Lord Empey said: “Affectionately known to his senior colleagues as ‘the wee man’, Jim Molyneaux was never one to be carried away by the high offices he held over the years.
“Whether as a long serving member of parliament, as party leader or as a member of the House of Lords, Jim was always a no-frills politician.”