The EirGrid Chief Executive Fintan Slye has again defended the overhead options for the North-South interconnector and has confirmed there has been no public consultation with local communities regarding possible underground options for the 140km high voltage line. Mr Slye told the Oireachtas committee on Transport and Communications that pylons were the only way to proceed with a vital piece of national infrastructure and to fix what was a current bottleneck in the all-island grid system. Mr Slye told TDs and Senators that putting the line underground would add around half a billion Euro to the cost, which he says as a state company they could not justify in passing on to electricity consumers. Mr Slye said he was committed to proceeding with the line as soon as possible.

“Our view is that the most appropriate solution for a North-South is an overhead line and the planning application, a draft of which is with An Bord Pleanala as we speak, is based upon an overhead line solution. It is stating that as our preferred option,” Mr Slye told the committee. “The public should not have to pay for the cost of undergrounding when there is no enhancement of service”, he said.

Groups such as the County Monaghan Anti-Pylons Committee have been campaigning for power cables to be placed underground as part of EirGrid’s upgrading of the country’s energy infrastructure. However, a recent report said that this is not an option for the North-South route from Meath through Cavan and Monaghan to Armagh and Tyrone. Now Mr Slye has moved again to confirm this. He said there were also additional complications involved with undergrounding the North/South interconnector.

EirGrid has been liaising with An Bord Pleanála and landowners on the issue. “We have liaised with landowners and are inviting them to speak to us. They can make submissions when the public consultation opens,” Mr Slye added. EirGrid has opened offices in Cavan, Meath and Carrickmacross and Mr Slye said members of the public could visit to express their concerns or ideas on the project. 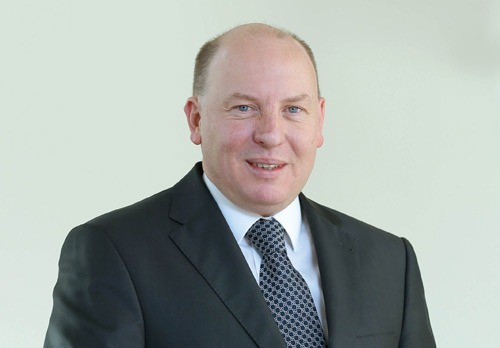 Born and brought up in Dublin, Fintan Slye graduated in engineering from UCD in 1991 and went on to complete a masters in artificial intelligence and power systems restoration in 1993.  He worked with ESB National Grid and ESB International between 1993 and 2002; this included consultancy on combined heat and power and market reform in continental Europe.

He then worked on the SE-Trans Regional Transmission Operator (RTO) project in the south-eastern United States between 2002 and 2004.  A two-year term at McKinsey’s Dublin office then followed. He was appointed as EirGrid’s Director of Operations in 2007, and was promoted to Chief Executive in October 2012.