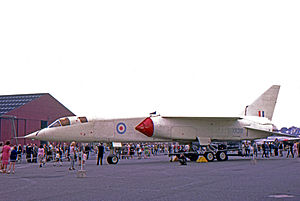 An opportunity lost: we gave it all away. Some of the sentiments expressed in a fascinating BBC4 series on ‘Cold War, Hot Jets‘. At the end of the second world war, Britain was the leader in the field of jet propulsion. Twenty years of research went into developing the TSR2 strike and reconnaissance airccraft, a light bomber that could reach supersonic speed and could operate both at high and low-level altitude.

Harold Wilson’s win in the October 1964 general election and his elevation to 10 Downing Street as Prime Minister changed all that. The new Labour government initiated cutbacks in the defence programme and the TSR2 was scrapped. I remember (as a grammar school pupil in London) I had a picture postcard of this stunning jet as well as having it on a poster which showed other RAF aircraft.

Denis Healey, Defence Minister in Wilson’s Cabinet said at the time of the cancellation in April 1965: “The trouble with the TSR-2 was that it tried to combine the most advanced state of every art in every field. The aircraft firms and the RAF were trying to get the Government on the hook and understated the cost. But TSR-2 cost far more than even their private estimates, and so I have no doubt about the decision to cancel.”

The TSR2 was developed by the British Aircraft Corporation (BAC) for the Royal Air Force in the late 1950s and early 1960s. The jet was designed to penetrate a well-defended forward battle area at low altitudes and very high speeds, and then attack high-value targets in the rear with nuclear or conventional weapons. Another intended combat role was to provide high-altitude, high-speed stand-off, side-looking, radar and photo imagery and signals intelligence, reconnaissance. Some of the most advanced aviation technology of the period was incorporated in order to make it the highest-performing aircraft in the world in its projected missions.

The TSR-2 was the victim of ever-rising costs and inter-service squabbling over Britain’s future defence needs, which led to the controversial decision to scrap the programme in 1965. With the election of a new government, the TSR-2 was cancelled due to rising costs, in favour of purchasing an adapted version of the General Dynamics F-111, a decision that itself was later rescinded as costs and development times increased. The replacements included the Blackburn Buccaneer and Mc Donnell Douglas F-4 Phantom II, both of which had previously been considered and rejected early in the TSR-2 procurement process. Eventually, the smaller swing-wing Panavia Tornado was developed and adopted by a European consortium to fulfil broadly similar requirements to the TSR-2.

There were considerable problems with realising the design. Some contributing manufacturers were employed directly by the Ministry rather than through BAC, leading to communication difficulties and further cost overruns. Equipment, an area in which BAC had autonomy, would be supplied by the Ministry from “associate contractors”, although the equipment would be designed and provided by BAC, subject to ministry approval. The overall outlay of funds made it the largest aircraft project in Britain to date.

Unlike most previous projects, there were to be no prototypes. Under the “development batch” procedure pioneered by the Americans (and also used by English Electric for the Lightning), there would instead be a development batch of nine airframes, to be built using production jigs. The choice of proceeding to production tooling turned out to be another source of delay, with the first aircraft having to adhere to strict production standards or deal with the bureaucracy of attaining concessions to allow them to exhibit differences from later airframes. Four years into the project, the first few airframes had effectively become prototypes in all but name, exhibiting a succession of omissions from the specification and differences from the intended pre-production and production batches. 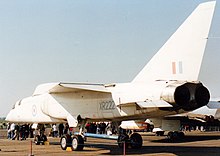 Despite the increasing costs (which were inevitable, given the low original estimates), the first two of the development batch aircraft were completed. Engine development and undercarriage problems led to delays for the first flight which meant that the TSR-2 missed the opportunity to be displayed to the public at that year’s Farnborough Airshow. In the days leading up to the testing, Denis Healey, then the Opposition defence spokesman, had criticised the aircraft saying that by the time it was introduced it would face “new anti-aircraft” missiles that would shoot it down making it prohibitively expensive at £16 million per aircraft (on the basis of only 30 ordered).

Test pilot Roland Beamont finally made the first flight from the Aeroplane and Armament Experimental Establishment (A&AEE) at Boscombe Down, Wiltshire, on 27 September 1964. Initial flight tests were all performed with the undercarriage down and engine power strictly controlled—with limits of 250 kn (460 km/h) and 10,000 ft (3,000 m) on the first (15-minute) flight. Shortly after takeoff onXR219’s second flight, vibration from a fuel pump at the resonant frequency of the human eyeball caused the pilot to throttle back one engine to avoid momentary loss of vision.

Only on the 10th test flight was the landing gear successfully retracted—problems preventing this on previous occasions, but serious vibration problems on landing persisted throughout the flight testing programme. The first supersonic test flight (Flight 14) was achieved on the transfer from A&AEE, Boscombe Down, to BAC Warton. Over a period of six months, a total of 24 test flights were conducted. Most of the complex electronics were not fitted to the first aircraft, so these flights were all concerned with the basic flying qualities of the aircraft which, according to the test pilots involved, were outstanding. Speeds of Mach 1.12 and sustained low-level flights down to 200 ft (above the Pennines) were achieved. Undercarriage vibration problems continued, however, and only in the final few flights, when XR219 was fitted with additional tie-struts on the already complex landing gear, was there a significant reduction in them. The last test flight took place on 31 March 1965.

Although the test flying programme was not completed and the TSR-2 was undergoing typical design and systems modifications reflective of its sophisticated configuration, “[t]here was no doubt that the airframe would be capable of accomplishing the tasks set for it and that it represented a major advance on any other type.”

Costs continued to rise, which led to concerns at both company and government upper management levels, and the aircraft was also falling short of many of the requirements laid out in OR.343, such as takeoff distance and combat radius. As a cost-saving measure, a reduced specification was agreed upon, notably reductions in combat radius to 650 nmi (1,200 km), the top speed to Mach 1.75 and takeoff run up increased from 600 to 1,000 yards (550 to 910 m).

XR220 at the RAF Museum, Cosford, 2007. The two cockpit canopies are coated with a thin film of gold to protect the occupant’s eyes from a nuclear flash

By the 1960s, the United States military was developing the swing-wing F-111 project as a follow-on to the Republic F-105 Thunderchief, a fast low-level fighter-bomber designed in the 1950s with an internal bay for a nuclear weapon. There had been some interest in the TSR-2 from Australia for the Royal Australian Air Force (RAAF), but in 1963, the RAAF chose to buy the F-111 instead, having been offered a better price and delivery schedule by the American manufacturer. Nonetheless, the RAAF had to wait 10 years before the F-111 was ready to enter service, by which time the anticipated programme cost had tripled. The RAF was also asked to consider the F-111 as an alternative cost-saving measure. In response to suggestions of cancellation, BAC employees held a protest march, and the new Labour government, which had come to power in 1964, issued strong denials.

However, at two Cabinet meetings held on April 1st 1965, it was decided to cancel the TSR-2 on the grounds of projected cost, and instead to obtain an option agreement to acquire up to 110 F-111 aircraft with no immediate commitment to buy. This decision was announced in the budget speech of 6 April 1965. The maiden flight of the second development batch aircraft, XR220, was due on the day of the announcement, but following an accident in conveying the airframe to Boscombe Down, coupled with the announcement of the project cancellation, it never happened. Ultimately, only the first prototype, XR219, ever took to the air. A week later, the Chancellor defended the decision in a debate in the House of Commons, saying that the F-111 would prove cheaper.