Visit to WWI graves in Flanders. First and last shots of the Great War. Our group of six left Brussels Airport and headed for Mons. At this spot at Casteau, the British Expeditionary Force engaged with the Germans, firing the first shots on 22nd August 1914.

Major Tom Bridges, commander of C Squadron, 4th Battalion of the Royal Irish Dragoon Guards was on reconnaissance near Mons when he saw a German advance mounted guard and gave chase with his horsemen. During the pursuit Corporal Thomas became the first British soldier to fire a shot in anger in continental Europe since the battle of Waterloo (near Brussels) 100 years earlier.

This stone monument was unveiled on 20th August 1939 at the spot where Thomas had set off to chase four German cavalrymen. Thomas was a career soldier who had enlisted at the age of 14. He survived the war and was awarded the Military Medal.

Opposite this memorial is a bronze plaque marking the spot where troops of the 116th Canadian Infantry Battalion stopped on Armistice Day, 11th November 1918, during the liberation of Mons. The plaque was unveiled on 7th July 1956. For the British Empire, the War had ended at the precise spot where it had started four years earlier. 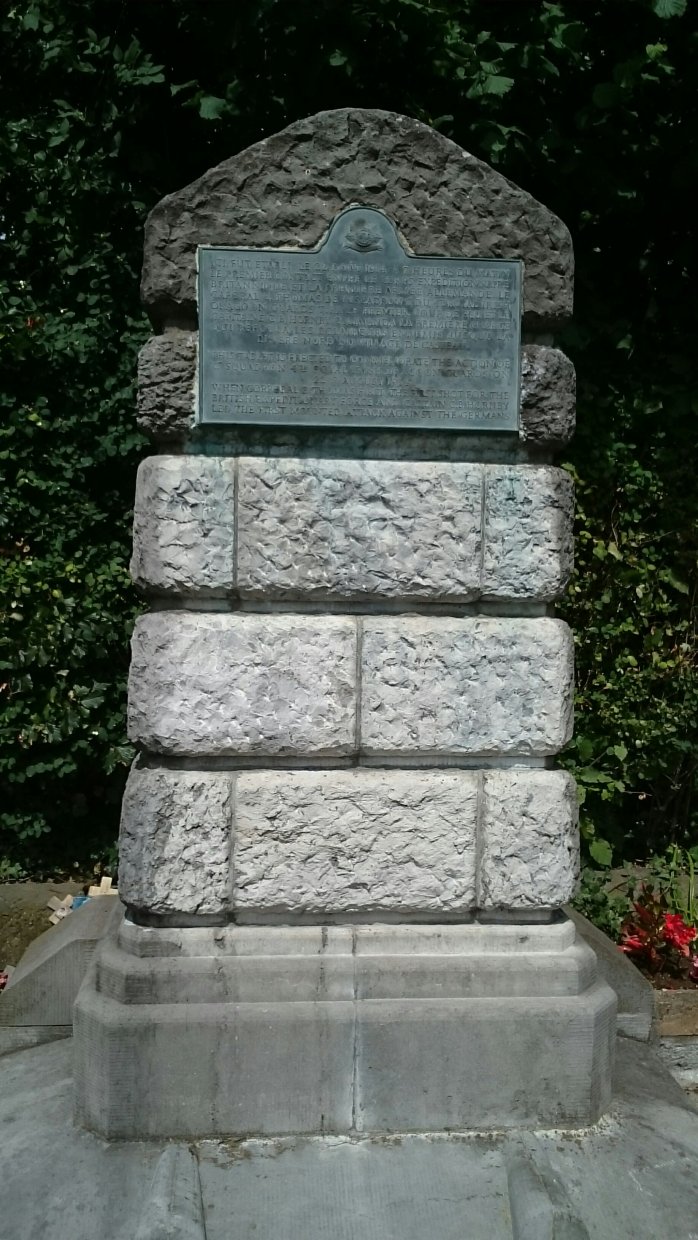 At a crossroads at La Bascule outside Mons there is a Celtic cross. The limestone monument, five metres high, is dedicated to the 2nd battalion of the Royal Irish Regiment, which recruited in the south-east counties of Wexford, Waterford, Tipperary and Kilkenny.

The inscription at the base reads: “To the glory of God and to the memory of the men and officers of the Royal Irish Regiment (18th Foot) who fell during the Great War 1914-1918. Near this spot the 2nd Battalion commenced operations on 23rd August 1914 and finished on 11th November 1918 after being decimated on four occasions.”

The cross is located at exactly the point where a motley outfit of cooks, store men, drivers and dispatch riders, about 50 in all, from the 2nd Royal Irish Regiment, held up the German advance for several hours. Machen had read newspaper reports of the battle and set his story in the Mons salient where the battalion made its gallant stand.

The soldier who inspired the story of the angels of Mons was Quartermaster Sergeant Thomas William Fitzpatrick from Enniscorthy, Co Wexford. Sensing the danger, it was he who gathered together the little band of Irish brothers to man a trench were the cross now stands. From there, they held up the German advance for hours.

He wrote his own gripping account of events that day more than 40 years later. “I saw no Mons angels,” he wrote in The Old Contemptible journal in 1955. “I honestly think that not one of my men had the faintest idea what they were fighting for. In fact, I was not sure myself – which illustrates the unconquerable spirit of the British soldier of that day – the Irish soldier in our case.” (Ronan McGreevy, The Irish Times, August 2016).