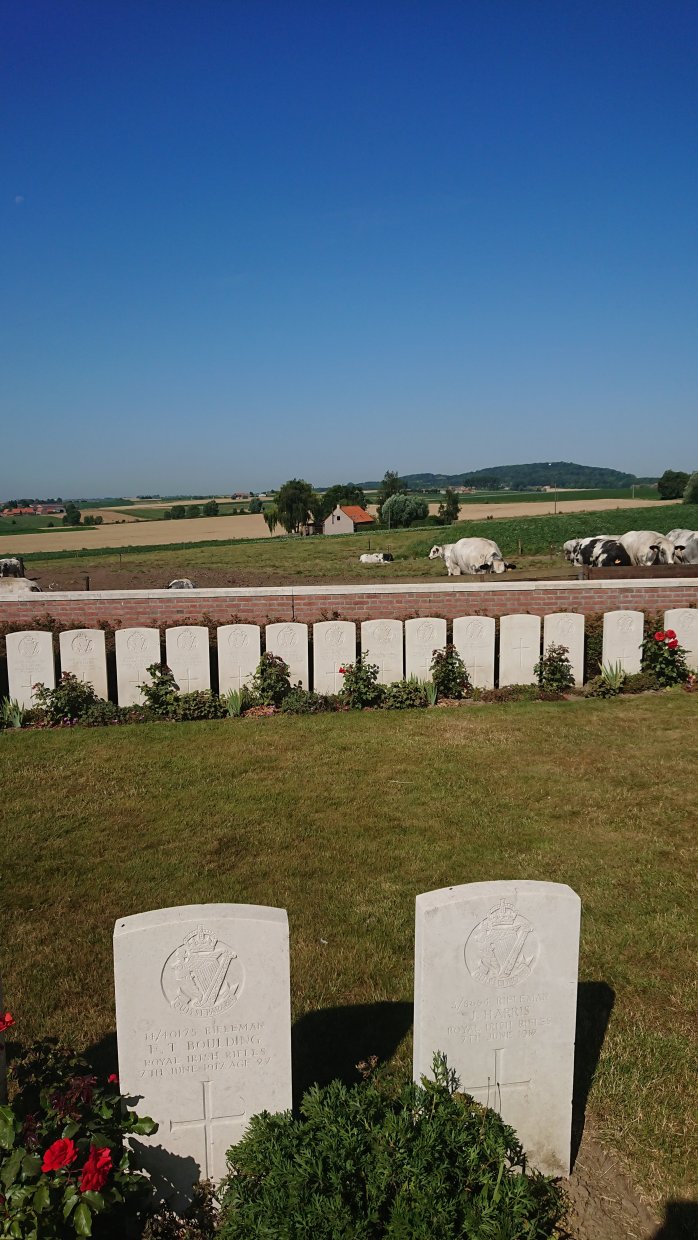 Lone Tree Cemetery near Wijtschaete is close to the Lone Tree Crater, one of nineteen that were made immediately before the infantry attack at the Battle of Messines in June 1917. Nearly all the graves in the cemetery are those of soldiers who fell on the first day of the Battle.

The Cemetery is maintained by the CWGC and contains 88 First World War burials. The cemetery was designed by J R Truelove.

Nearly all the graves are of soldiers from the Royal Irish Rifles: Rifleman Thomas Boulding (14th Bn) died Thursday 7th June 1917 aged 27. He was from Ashford in Kent. Rifleman J Harris (8th Bn) who died the same day is listed as having a sister who lived at Upper Dorset Street in Dublin.
Some of them were killed by the explosion of the large Spanbroekmolen mine (which was blown around 15 seconds later than planned) as they advanced.

The Spanbroekmolen Crater, also known as the Pool of Peace, is the largest and most imposing mine crater in the Westhoek area. It was created by the explosion of one of the 19 deep mines detonated at the opening of the Battle.

In 1914 Spanbroekmolen was the site of a windmill (“molen” is the Dutch word for “mill”). At the end of the First Battle of Ypres in November 1914 the German Front Line was established in this location on the high ground of the Messines Ridge. Between then and the start of June 1917, the Germans spent a year and a half developing well-established positions with concrete bunkers and strong defensive positions.

The mine at Spanbroekmoelen was started by 171st Tunneling Company, Royal Engineers, on 1st January. Six months later the mine was finished. To celebrate the mine’s completion two officers made their way into the chamber with four bottles of champagne and drinking glasses. The main charge for the mine was made up of 50 LB (pound) boxes of ammonol, totalling 90,000 lbs (pounds). The main charge was finally completed on 28thJune 1916 and officially completed, according to the War Diary, on 1st July 1916.

A branch gallery had also been driven in the direction of Rag Point, which was a German position about three quarters of a mile south of the Spanbroekmolen position. In February 1917 the Germans dug a tunnel underneath the British gallery. They set explosive charges to explode two camouflets. As a result the right hand branch of the British gallery was damaged and it was abandoned.

On 3rd March 1917 the Germans blew another camouflet which damaged about 900 feet of the main gallery. It broke the connection for the electric detonator leads for the explosive charge which had been lying silently in position under the Spanbroekmolen position since June the previous year.

A new gallery had to be mined to by-pass the damaged tunnel and the detonator leads had to be rerouted through this new tunnel to the chamber and explosives. There was serious difficulty with gas while the new tunnel was being dug. The mine was to be ready to blow at the launch of the major attack on the German lines on the Messines Ridge in June.

In a race against time the new by-pass gallery was completed and tamped. The detonating charge, consisting of 500 lbs (pounds) of ammonal and 500 lbs (pounds) of dynamite was laid on 1 June. The mine was to be fired by power and alternative firing by exploders was arranged in case the electric circuits did not function. The mine was finally completed on the night of 6th June 1917. Major Hudspeth, commander of the 171st Tunnelling Company, sent a message to the headquarters of the 36th (Ulster) Division that night. This division was to attack the German position at Spanbroekmolen at the start of the British attack set for 03.10 hours the following morning, 7th June. Major Hudspeth’s message confirmed that it was “almost certain” that the mine would blow the next morning. The commanders of the 36th (Ulster) Division could only wait in anticipation to see if it did.

The dimensions and details of the Spanbroekmolen mine are as follows:

The crater has filled with water as a result of the high water table and the clay soil in the area. mine crater was purchased for Toc H by Lord Wakefield in the 1920s to be preserved as a memorial site on the Ypres Salient battlefields. The mine crater has subsequently been named the “Pool of Peace” and is still the property of Toc H in Poperinge (see separate article).