In Flanders fields the poppies blow

Between the crosses, row on row,
That mark our place; and in the sky

Scarce heard amid the guns below.

We are the Dead. Short days ago
We lived, felt dawn, saw sunset glow,
Loved and were loved, and now we lie,

Take up our quarrel with the foe:
To you from failing hands we throw

The torch; be yours to hold it high.

If ye break faith with us who die
We shall not sleep, though poppies grow

At the beginning of WWI in 1914, Canada, as a Dominion within the British Empire, was at war as well. McCrae was appointed as Medical Officer and Major of the 1st Brigade CFA (Canadian Field Artillery). He treated the wounded during the Second Battle of Ypres in 1915, from a hastily dug, 8 foot by 8 foot bunker dug in the back of the dyke along the Yser Canal about 2 miles north of Ypres. McCrae’s friend and former militia pal, Lt Alexis Helmer, was killed in the battle, and his burial inspired the poem, ‘In Flander’s Fields’, which was written on May 3rd 1915 and was first published in the magazine Punch.

Bunker where McCrae treated the wounded

From June 1st 1915, McCrae was ordered away from the artillery to set up No. 3 Canadian General Hospital at Dannes-Camiers near Boulogne-sur-Mer, northern France. C.L.C. Allinson reported that McCrae “most unmilitarily told [me] what he thought of being transferred to the medicals and being pulled away from his beloved guns. His last words to me were: ‘Allinson, all the goddamn doctors in the world will not win this bloody war: what we need is more and more fighting men.'”

“In Flanders Fields” appeared anonymously in Punch on December 8, 1915, but in the index to that year McCrae was named as the author. The verses swiftly became one of the most popular poems of the war, used in countless fund-raising campaigns and frequently translated. “In Flanders Fields” was also extensively printed in the United States, whose government was contemplating joining the war, alongside a ‘reply’ by R.W.Lillard, “…Fear not that you have died for naught, / The torch ye threw to us we caught…”. 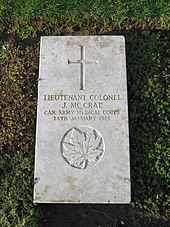 McCrae’s grave at the CWGC Cemetery at Wimereux, France

For eight months the hospital operated in Durbar tents shipped from India, but after suffering from storms, floods, and frosts it was moved in February 1916 into the old Jesuit College in Boulogne-sur-Mer.

McCrae, now “a household name, albeit a frequently misspelt one”, regarded his sudden fame with some amusement, wishing that “they would get to printing ‘In F.F.’ correctly: it never is nowadays”; but (writes his biographer) “he was satisfied if the poem enabled men to see where their duty lay.”

On January 28, 1918, while still commanding No. 3 Canadian General Hospital (McGill) at Boulogne, McCrae died of pneumonia with “extensive Pneumococcus meningitis” at the British General Hospital in Wimereux, France. He was buried the following day in the CWGC section of Wimereux Cemetery, just a couple of kilometres up the coast from Boulogne, with full military honours.

A plaque with McCrae’s poem ‘In Flander’s Fields’