After yesterday’s article about the Star Spangled Banner, it is appropriate to continue the American theme. This afternoon in the sky above Belfast you could hear and then see a reminder of the United States role in World War II.

A restored Boeing B-17 Flying Fortress bomber of the type used by the US Air Force in raids on Germany performed a number of flypasts to coincide with the end of a ceremony at the former American military cemetery at Lisnabreeny in the Castlereagh hills, close to Lagan College.

I will write more about the remembrance service tomorrow. It was attended by Northern Ireland’s First Minister Peter Robinson MLA. He laid a wreath at the memorial that carries the names of 148 US Army Air Force, US Army and US Navy servicemen who died in Northern Ireland while in training for deployment to the battlefield. This field had served as an American military cemetery until 1948, when the remains of those interred were repatriated.

WWII US jeep at the ceremony at Lisnabreeny Photo: © Michael Fisher

The Flying Fortress is the last remaining airworthy B-17 in Europe and is based at Duxford in England. It takes part regularly in air shows, commemorative events and memorial flypasts such as today in Belfast. The plane passed over low a couple of times and then headed southwards towards Dublin. It landed at the Irish Army Air Corps base at Casement Aerodrome, Baldonnel and tomorrow it will take part in the Flightfest display over the River Liffey around 3:45pm. To make a donation to help keep the B-17 flying please click here. 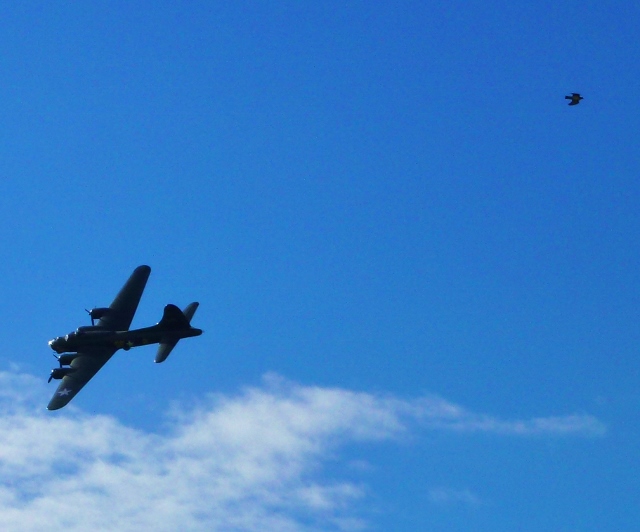 The B-17 was critical to the USAAF daylight precision bombing campaign and was armed with 13 machine guns, hence the name “Flying Fortress”. Flying in formation, the bombers battled through German defences in daylight raids, suffering heavy casualties until the addition of long-range escort fighters, the P-47 Thunderbolt and P-51 Mustang, and the introduction of the 25-mission limit.