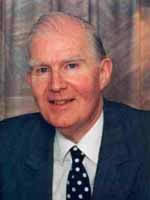 George Quigley had a vision for an all-island economy. It was not a matter of politics for him, but as a businessman he thought it made sense. I met him for interviews on a number of occasions in the different roles he performed so well. A former high-profile civil servant, he entered the private sector as Chairman of Ulster Bank from until 1989 until 2001. I wonder how he would have felt about some of their recent problems regarding IT systems!  Sir George also served as a non-executive director on the Main Board of Nat West bank and as Chair of the Royal Bank of Scotland Pension Fund. He also chaired Lothbury Property Trust. He was a director of the aerospace company Shorts (owned by Bombardier) and was appointed Chairman of the company in to succeed Sir Roy McNulty in May 1999.

He was a leading member of the Northern Ireland Economic Reform Group. ergNI consists of economists, accountants and businessmen based in Northern Ireland who wish to see a more successful and competitive NI economy, less dependent on a public sector subvention from taxpayers in Great Britain.  He led the debate about the benefits of introducing a lower rate of corporation tax in Northern Ireland that would match the Republic, which has this incentive to attract foreign direct investment.  He headed an industrial task force to examine the issue and claimed in 2006 a reduction from 30% to 12.5% would “double the growth rate of the local economy” and had the potential to create 180,000 jobs over 25 years.

Three years ago, Sir George along with the former Church of Ireland Primate Archbishop Robin Eames verified the decommissioning of weapons by the loyalist paramilitary group, the Ulster Defence Association. In a joint statement, the North’s First Minister Peter Robinson and deputy First Minister Martin McGuinness offered their condolences. They said he was “a strong advocate of mutual respect in building a cohesive and equal society“.

The Sinn Féin President Gerry Adams expressed his sadness and said “George was an experienced economist and a long-time advocate of the all-Ireland economy. Last year he participated in a Sinn Féin conference in Derry on the issue of uniting Ireland“. The former SDLP leader and Foyle MP Mark Durkan said “George Quigley was a man of energy, verve, compassion and humour. His warm instincts and sharp intelligence made him engaging and effective“.

Sir George played an active role in the Confederation of British Industry. Along with the late William Poole, he was a strong supporter of the IBEC-CBI Joint Business Council which promoted cross-border trade, business and transport co-operation. The Chairman of CBI Northern Ireland Ian Coulter described him as:-

“a great man who achieved so much in his lifetime. He had an intellect and a sense of civic duty that set the standard and was passionate about securing the long term future of Northern Ireland. More recently he played a key role in championing the cause of Presbyterian Mutual Society depositors and effectively created the debate for a lower corporation tax in Northern Ireland. Most of all, Sir George will be remembered for the role he played within civic society. The term ‘business leader’ is overused – Sir George was one of the very few who actually was one.”

Elsewhere his roles in public life have included chairman of the NI Economic Council and the Royal Group of Hospitals and he conducted a review of the Parades Commission. He served on the Dearing Committee on the future of higher education in the UK (report published in 1997). In the Republic he had been president of the Economic and Social Research Institute and chairman of the board of the Institute of British-Irish Studies in University College Dublin. He was a member of the Royal Irish Academy.

Three months ago he told a Northern Ireland Assembly committee for finance and personnel how he had been invited some 13 years ago by the late William Poole, an official working for the CBI, and the then Northern Ireland officer of the ICTU, the late Terry Carlin, to meet them so that they could pick his brains on the matter of recruiting ex-prisoners. They felt that something needed to be done about the issue. Sir George told MLAs that before long, he found himself chairing a group of around 30 people consisting of the representatives of groups whose members had been involved with the IRA, INLA, UDA and UVF. There were also representatives of agencies with relevant interests, such as training, as well as employer and trade union representatives. Some of their meetings were held at the Ulster Bank when he was chairman.

Sir George was taken ill on Sunday as he attended his local Presbyterian church at Helen’s Bay in County Down. He was 83. I have had the privelege of dealing with all three men and talking to them at various stages about the Northern Ireland economy. Now they have departed for their eternal reward, but hopefully they have given encouragement for the future by their actions. The ICTU offices in Belfast are named after Terry Carlin. William Poole and George Quigley also deserve to be remembered in an appropriate manner.

May they all rest in peace.