A British royal visitor Prince Edward came and went without any major disruption, except perhaps for the residents of Hillsborough who found some traffic and parking restrictions during the afternoon. The occasion was the annual Secretary of State’s garden party at Hillsborough Castle. Earlier the Earl of Wessex had presented a group of young people with their Duke of Edinburgh awards in a brief ceremony at the Belfast Harbour Commissioners building. The Lord Lieutenant of Belfast Dame Mary Peters was there to greet him along with the deputy Lord Mayor Alderman Christopher Stalford.

Dame Mary was also present at Hillsborough but in a different capacity, this time as patron of the World Police and Fire Games 2013. She introduced His Royal Highness to representatives of the local organising committee.

WPFG Games Patron Mary Peters has proved to be a wonderful ambassador for the games. As Patron, she has been here, there and everywhere during the past fortnight and has visited most of the 40+ venues. I welcomed her to the Odyssey Arena at the start of the Ice Hockey on July 25th. 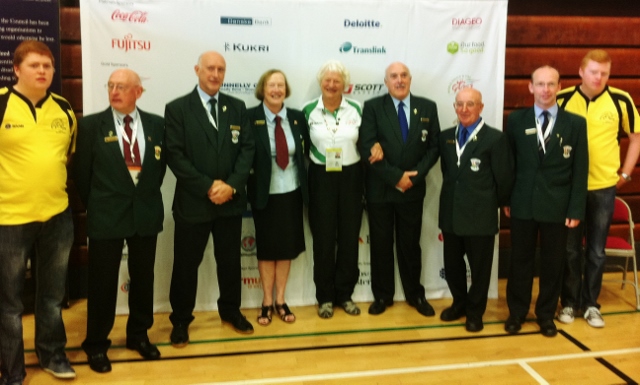 Today (Friday 9th) she was in Newtownabbey, watching the men’s singles in the table tennis at the Valley Leisure Centre. She met volunteers and officials, and also posed for photographs with members of the public who had come to watch the competition.

This morning Ireland won a bronze medal when a Garda competed in the men’s singles.

Garda Louise Long from Celbridge, County Kildare who is based at Blackrock, Co.Dublin was playing in the women’s singles. She is an Ireland national coach and has been in the Gardaí for over seven years. But her opponents especially the Chinese proved too strong for her. 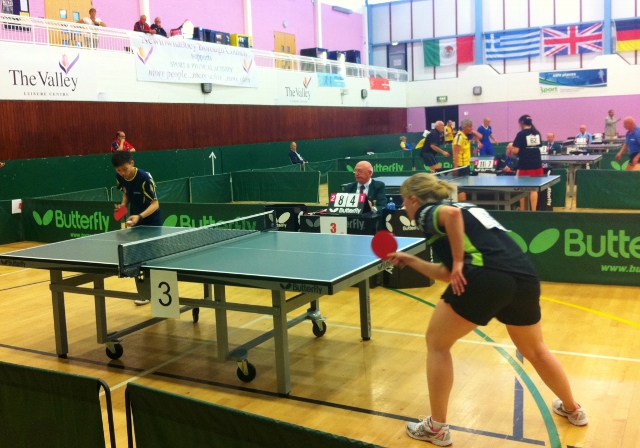 The results in the women’s singles were: Bronze Susanne Eckholdt (Germany); Silver Wan Ling and Gold Mei Yang (China). Now I had better get some sleep otherwise Susanne and her three German colleagues I am collecting in the morning will not get their lift from the Malone Road to Newtownabbey! I gave them a lift back to Belfast as there was still some trouble in the city centre.

Celebrations on the ice at the Odyssey tonight as the Toronto Courts ice hockey team received the first gold medals of the 20th World Police and Fire Games 2013 in Northern Ireland. With over 15,000 spectators passing through the Odyssey Arena in Belfast over the past six days, perhaps the organisers should have  started the games officially with the ice hockey tournaments. In fact the games will not be opened until Thursday when a special ceremony will be held at the King’s Hall, close to where I live in South Belfast. The games then run from Friday 2nd August until Saturday 10th. 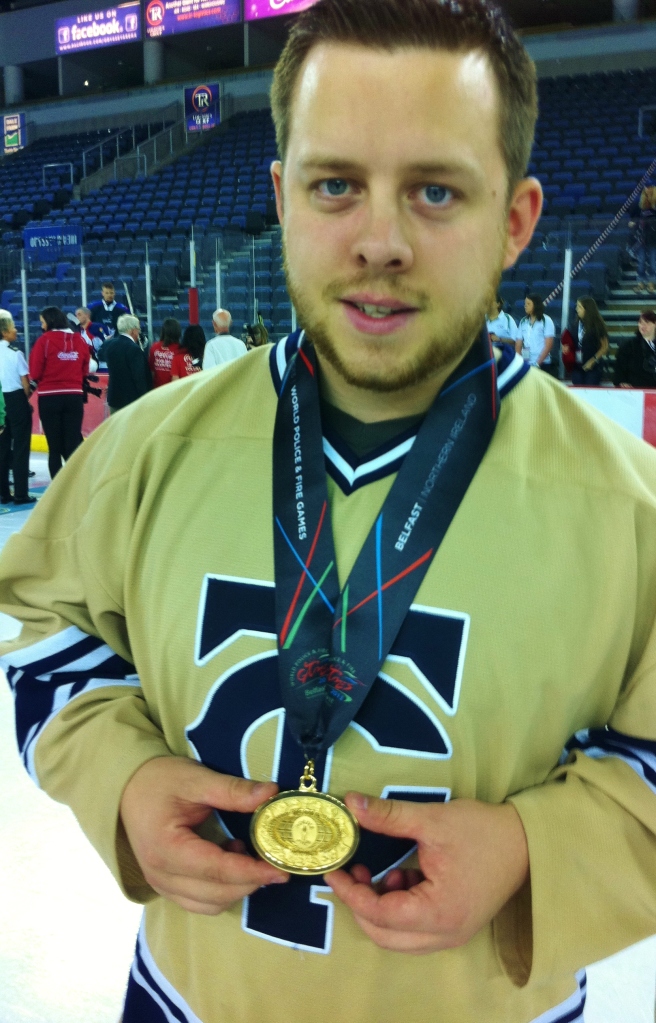 BBC Northern Ireland will bring full live coverage of the opening ceremony. Live pictures will be beamed across the world through online streaming from the King’s Hall complex: Log on to bbc.co.uk/ni. Coverage will begin from 6.30pm. BBC NI cameras will also be recording at the opening event for a special one-hour highlights programme. The programme is on BBC2 Northern Ireland on Saturday August 3rd at 7.30pm and repeated on Tuesday, August 6th on BBC2 at 7.00pm.

Presented by Gavin Andrews and Claire McCollum it will look back at the colour and spectacle of the opening ceremony as well as meeting up with some of those who have travelled from far and wide to take part in some of the events over the ten days. BBC Newsline will also report live from the opening ceremony. There will be further coverage of the games on BBC Radio Ulster including a number of outside broadcasts from across some of the different events.

Talkback will resonate to the sound of leather on willow as the World Police and Fire Games get under way. Wendy Austin will be live at the Stormont estate on Thursday, August 1 from 12-1-30pm, where the cricket competition will be in full swing. Later that day, Alan Simpson will bring his afternoon programme from the King’s Hall complex between 3 and 5pm looking towards the opening ceremony of the games in the evening.

Anne-Marie McAleese and the Your Place and Mine team will head to Donard Park in Newcastle on Saturday, August 3 from 8.05 to 9.05am – the location for the WPFG mountain running event, while Hugo Duncan will be at the Titanic Slipway on Wednesday, August 7 from 1.30-3pm, where the WPFG Ultimate Fire Fighter competition will take place.

My day as the match announcer started with a high-scoring contest in which the Russian Home Affairs Ministry heavily defeated Trondheim Fire Department from Norway 11-0. This was in the 45+ division, as was the second game between Service Incendie de Montréal (Montreal Fire Service) and Finland Police. The team from Québec won 7-2. 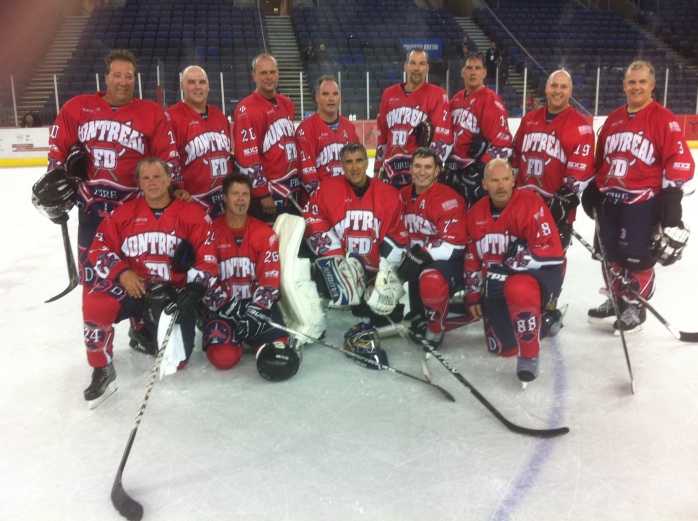 Then came the final games in the Novice section. The dancing ladies from Finland got behind their team, South West Finland Emergency Services and they ran out easy winners over UK Firefighters/HMP Tornados. The Finns even lent their standby net minder to the Tornados, who had one of the smallest squads in the group and lost their net minder through injury. The ladies were in such great form afterwards that I called them down and gave them the microphone and got them to perform their song for the rest of the spectators. They also had a party piece that sounded very like “Glory, glory Norn Iron”, so I got them to perform that as well and asked the audience to join in, substituting their version accordingly! 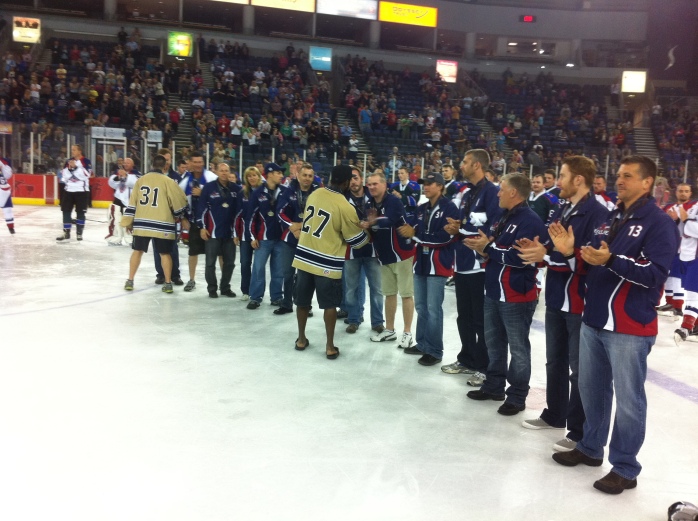 Having stood in the control box for three games it was time for me to have a break and I got to see the final period of the Gold Medal game in which Toronto Courts were the victors. After that it was time to help the team whatever way I could. I ended up being a goal judge for the third period of the game between the local side NI Tridents and Reykjavik Ice Falcons, whose warm-up was always preceded by the singing of a song in the dressing room. One Tridents goal came in at my end but it was not enough against the mighty Icelanders, who won 6-2. Two Gardaí are members of the Tridents team. The local fans really got behind the Tridents and hopefully the thrilling atmosphere will have given them a boost as they prepare to return to their day jobs.

There will be more action tomorrow (Wednesday), my final day at the Odyssey Arena to bring a busy week to an end. Four matches will be held there and remember, they are all FREE! So drop in to see some fast and exciting action on the ice!

The matches will continue from Friday 2nd until Friday 9th August, but I will not be involved with them as I have other work to do. A full schedule of ice hockey games at the Odyssey Arena and at Dundonald Ice Bowl can be found here. I will be back in action as a volunteer on August 9th and 10th and you will be able to read my blog about my experiences.