The first anniversary of my father’s death on 30th December 2014 was marked with a Mass at the house in Dublin. To the right of the celebrant Fr Martin Murnaghan (a regular Christmas visitor over the years) was an empty chair with Dad’s photo and some candles. This is where he worked daily on his laptop and completed the manuscript for a book Stabat Mater, with his own translation of the original Latin poem. The book was published by Gracewing in May (£9.99) and copies can be obtained from them or via the family. 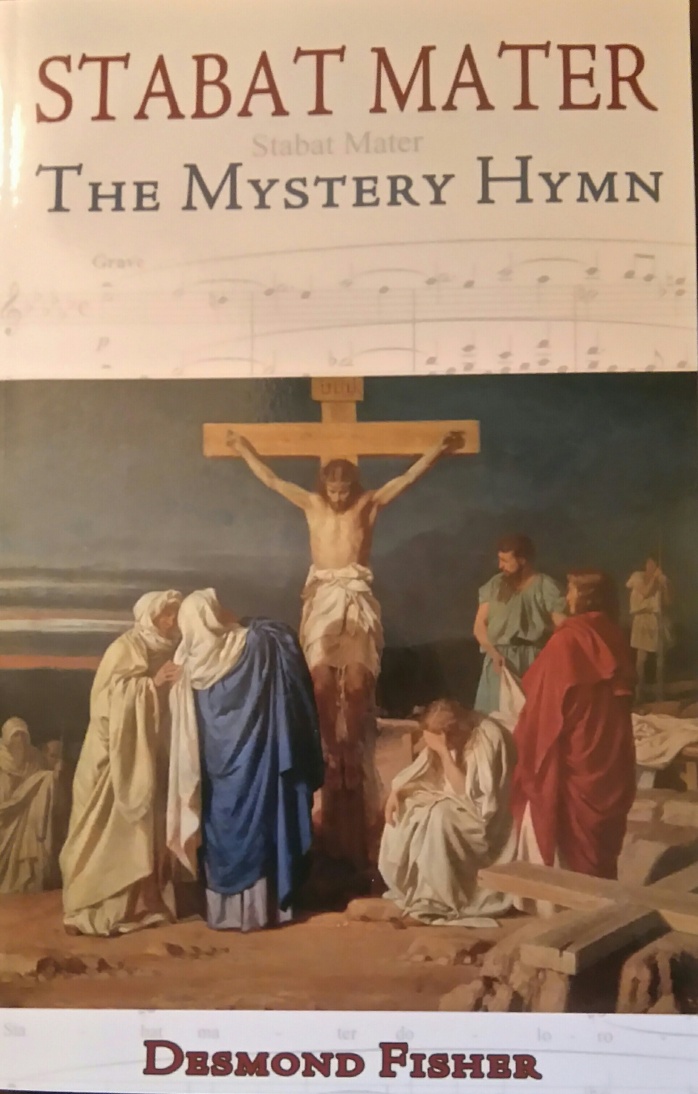 Book launches are always a good opportunity to meet people with shared interests and stories.

Last week, it was a pleasure to be invited by fellow blogger Michael Fisher to the launch in O’Connell’s in Donnybrook of a new book by his late father Desmond Fisher, Stabat Mater, The Mystery Hymn.

The book was launched by former Irish Times colleague and former Senator John Horgan, who is also a former Press Ombudsman. As a young reporter, John Horgan was given a job at the Catholic Herald in London by the editor, Desmond Fisher, who also worked for the Irish Press.

The attendance at the book launch included Wesley Boyd, who has reviewed the book in the ‘Irishman’s Diary’ in The Irish Times this morning [18 May 2015], and many former colleagues from, the world of journalism and broadcasting. But I was also there because of my theological and spiritual interests.

Stabat Mater is a much-loved Lenten hymn among English-speaking Roman Catholics, although it was once been banned by the Council of Trent and later by successive popes.

The title of this sorrowful hymn is an incipit of the first line, Stabat Mater Dolorosa (“The sorrowful mother stood”). The hymn meditates on the sorrows of the Virgin Mary as she stands at the foot of the Cross. It has been set to music by many composers, including Palestrina, Pergolesi, Alessandro Scarlatti and Domenico Scarlatti, Vivaldi, Haydn, Rossini, Dvořák, Karol Szymanowski, Poulenc and Arvo Pärt.

There are many variations in the translation from the original Latin. So, in this new book the late Desmond Fisher seeks to get back to the original meaning of the author who wroteStabat Mater 700 years ago. The hymn was well-known by the end of the 14th century. It was banned by the Council of Trent, but restored to the missal by Pope Benedict XIII in 1727, and was assigned by Pope Pius X in 1913 to the Feast of Our Lady of Sorrows (15 September).

But who was the author? At times, the hymn has been attributed to a variety of sources, including popes, three Saints and a member of the laity who was jailed and excommunicated.

In this book, Desmond Fisher identifies Jacopone da Todi (1230-1306) as the true author, and tells the story of his amazing life, from a dissolute to a disconsolate and desolate life. His privileged life came to end with the tragic death of his wife, and he eventually joined the Spirituali, an extreme, ascetic faction of Franciscans, before ending up in prison.

With a sympathetic and understanding approach, Desmond Fisher tells an amazing story of mediaeval extremism, but also provides a new translation of the poem, while adhering to the original metre and rhythm and re-presenting its emotions. He compares his own work with other well-known existing English versions – including those by the Irish poet Denis Florence McCarthy (1817-1882) and the English Anglican priest and hymn-writer Edward Caswall (1814-1878), who became a Roman Catholic – and tries to challenge long-accepted preconceptions.

This book was Desmond Fisher’s final achievement before he died on 30 December 2014 at the age of 94. In his final weeks, his manuscript was accepted by Gracewing.

As part of the pre-Reformation heritage of the undivided Church, it deserves to be better known among other traditions, including Anglicans. Even Archbishop Richard Chenevix Trench omitted it from his Sacred Latin Poetry in 1874 because of what he saw as its Mariolatry. Hopefully, Desmond Fisher’s new book will help to redress this.

My late father’s book, Stabat Mater: The Mystery Hymn, was launched at a reception at O’Connell’s in Donnybrook, Dublin. The main speaker was the former Press Ombudsman, John Horgan. Some pictures from the launch are included here. 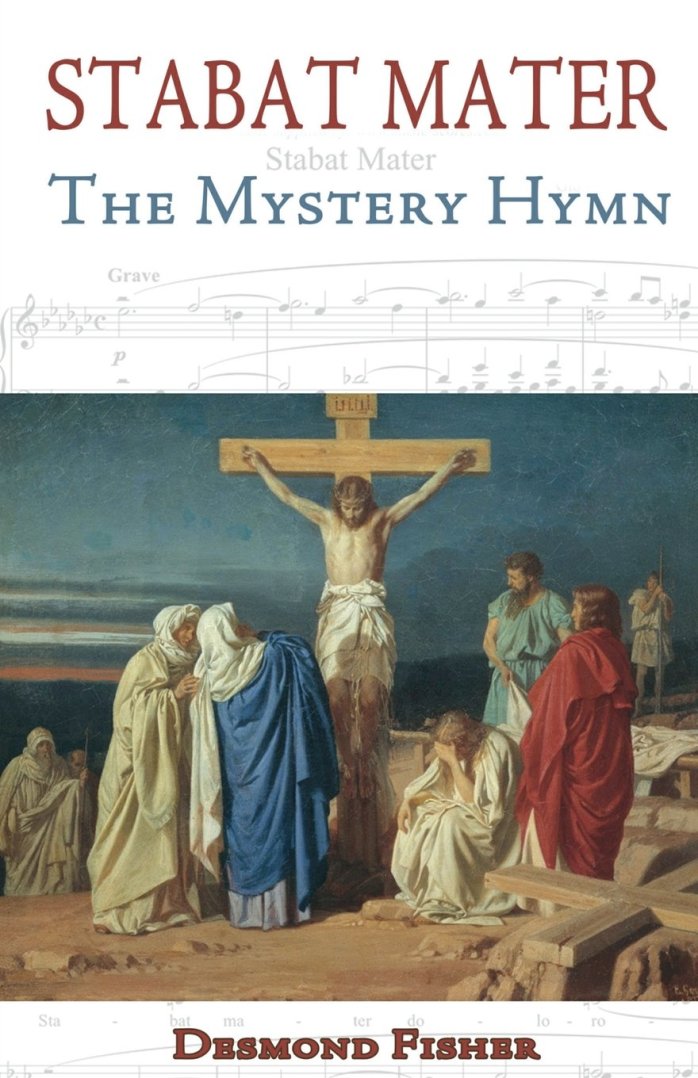 My father’s last achievement before he died at the end of last year, aged 94, was to finish a book about the medieval poem (hymn), Stabat Mater. It contained a new translation by him from the original Latin. He comes down in favour of Jacopone da Todi as being the author.

In his final weeks, the manuscript was accepted by a publisher in England, Gracewing. The first proofs were issued shortly after he was taken into hospital and he asked his family to take on the task of seeing that the relevant corrections were made and that the book was produced. Alas he did not live long enough to see it in print. However he was shown the book in draft form and I also provided him with laminated copies of the two pages containing his new translation of the poem (twenty stanzas). 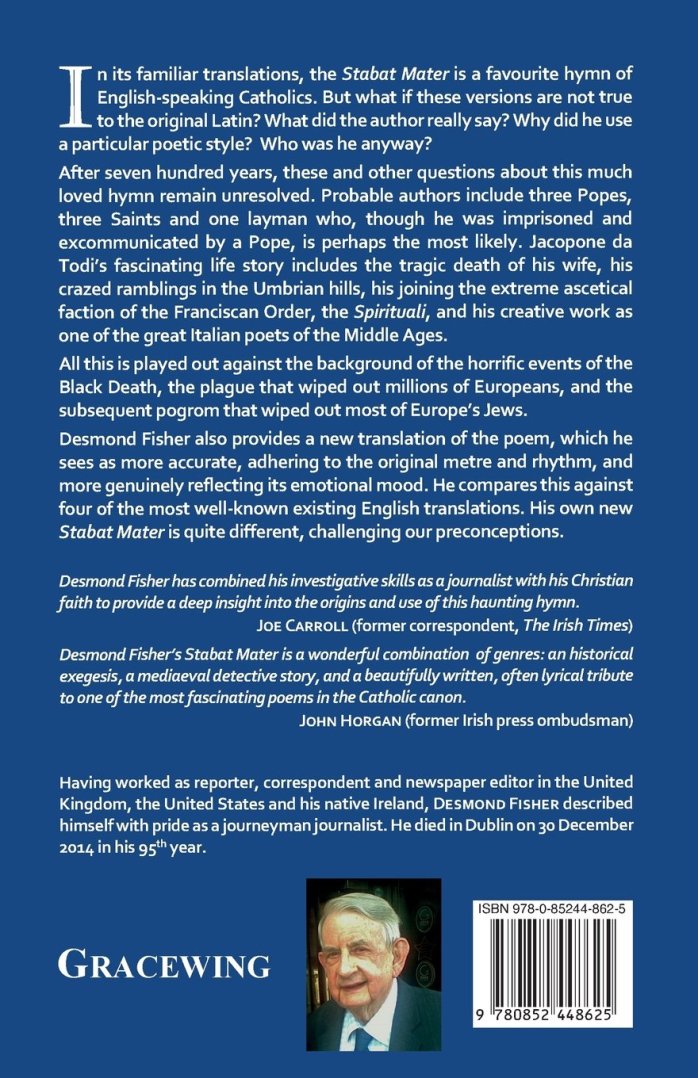 Stabat Mater Back Cover: with endorsements by John Horgan and Joe Carroll

I reproduced this alongside the Latin original and I hope it gave him some satisfaction to see this part of his work in print while he was still alive and remained lucid. At his cremation service at Mount Jerome in Dublin, I read the translation as a prayer.

A brief review of the book has appeared in the latest edition of the new Catholic Herald magazine. In the section ‘Briefly noted…’, the reviewer says:

“Stabat Mater by Desmond Fisher (Gracewing, £9.99). This fascinating account of the origins and different translations of the well-loved Lenten hymn was written not long before the death of its author, a former Catholic Herald editor, who died soon after its completion last year, aged 94. The book seeks to discover the hymn’s likely author: Jacopone da Todi, who lived at the time of the Black Death. Fisher provides his own translation of the hymn alongside others, though the well-known translation by Edward Caswall is likely to remain the popular choice for its familiarity and mournful cadences”.

This evening in Dublin we are launching the book. We are very pleased that John Horgan, the former Press Ombudsman. who as a young reporter was given a job by my father at the Catholic Herald in London, has agreed to be the main speaker. Copies of the book will be available at €10 and the proceeds on the night will be donated to the Irish Cancer Society in memory of my father.

If you would like an invitation to the event, please contact me. If you cannot attend and would like to purchase a copy, you can also contact me directly. If you live in Britain and wish to order a copy (£9.99) please do so using the Gracewing website or through Amazon or one of the online bookshops. It is also available worldwide using online orders.