An Irish Air Corps helicopter comes into land at an army barracks in a border town. But this is not near the state border between the Republic and Northern Ireland. As part of the peace process, Monaghan barracks has been demolished and is now an educational campus, with a new theatre.

My picture of an AgustaWestland AW139 was taken this afternoon in Athlone. It is one of six such aircraft in the Air Corps fleet. The observation point was from the Castle, looking across towards Custume Barracks. Until last year, it was the headquarters of Western command, but under reorganisation the 1,000 soldiers based there became part of what is now 2nd Brigade, with headquarters at Cathal Brugha Barracks in Dublin. The helicopter is providing an air ambulance service (Emergency Aeromedical Service) with air corps crew and one HSE paramedic on a trial basis until June. At the moment the EC-135 helicopter normally used is being rebuilt after an accident and the Westland helicopter operates from Baldonnel, Co. Dublin. 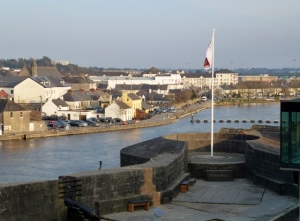 Athlone is an important gateway on the River Shannon. It is where Leinster (Longford, Westmeath) meets Connacht (Roscommon). The river, which has its source in Ulster (Shannon Pot) is the border between East and West. This is close to the centre of the island of Ireland. I remember passing this point on what was then the main Dublin to Galway Road when our family was heading to the West for a holiday in the 1960s. In those days the Castle was not open to the public, except for a small museum run by the Old Athlone Society. But the complex has now been developed and last week a new €4.3million visitor centre was officially opened.

Unfortunately my visit to the complex was only brief, as the last admissions are one hour before closing time, to enable visitors to take full advantage of the interactive displays. Thanks to a very helpful staff member, who wanted to give me an idea of the displays, I got a chance to look at the first gallery, featuring the early (Celtic) history of the town.  The new participatory experience has been developed by Event Communications, the same company which designed displays at Titanic Belfast and the Giant’s Causeway Visitor Centre in County Antrim.

The new Luan Gallery just across the road was closed. A pity, because I would like to have seen the controversial H-Block art work “Fragmens Sur Les Institutions Républicaines IV” by Longford artist Shane Cullen. At the opening of the exhibition three months ago, the former Fine Gael Minister for Justice Paddy Cooney criticised the display and called on the Town Council to get it removed. Perhaps he has forgotten his history. 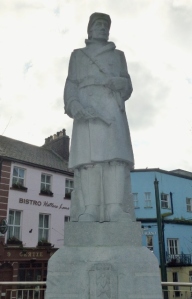 Only a few hundred metres away at the other end of the bridge there is a statue by Desmond Broe of an IRA volunteer in memory of members of the Athlone Brigade who lost their lives in the fight for independence. The same men who marched into the garrison (then Victoria Barracks) on February 28th 1922 to take it over from the British forces after the Anglo-Irish Treaty was signed. They were led by General Seán Mac Eoin,  accompanied by Brigadier George Adamson.

Two months later Adamson was shot dead by anti-treaty forces. His is one of the names on the memorial, along with John Blaney, although the inscriptions on two sides written in Irish and English give the dates as 1916 (Easter Rising) to 1921. Athlone Castle was later renamed Adamson Castle in his honour. Thank you to a reader who drew my attention to the silent film of the event which was is copyright © British Pathe and can be previewed here. Well worth looking at to see the picture of Commandant General Mac Eoin (the “Blacksmith of Ballinalee”) addressing his troops. 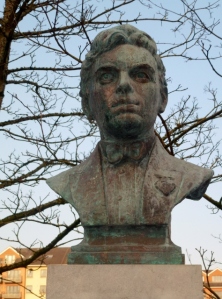 Another interesting statue along the bank of the River Shannon and close to the Luan Gallery is that of the internationally renowned tenor, Count  John McCormack. Born in Drumsna, he was baptised at St Mary’s Church in Athlone on 23rd June 1884. His parents were employed at the Athlone Woollen Mills. St Mary’s is on the Westmeath side of the town. At the moment, it is upgraded to a pro-Cathedral, following the fire at St Mel’s in Longford, which is undergoing a €30 million restoration. This means it serves as the seat for the Bishop of Ardagh and Clonmacnois, Dr Colm O’Reilly. Which reminds me of one other border in the town: the ecclesiastical one. The impressive church of St Peter and St Paul beside the Castle on the Roscommon side of the river is in the Diocese of Elphin, which stretches as far as Sligo. So there are plenty of interesting things to see and do here. 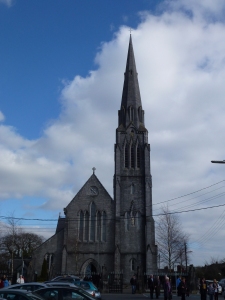 If you want to go for a meal, there is a good selection of restaurants on both sides of the bridge. I lunched at the Olive Grove and sat at a table with a splendid view alongside the River, immediately opposite the Castle. When I went over to the Castle after the meal, I noticed that two cannons dating from the 18th Century were pointing across at the restaurant!  They are marked “GR” referring to the reign of George II. The lunch was very enjoyable and contained a range of fresh Irish products, including  Fivemiletown goat’s cheese from County Tyrone. It also had two main courses based on Silver Hill duck, from Emyvale in County Monaghan. It’s important to know the source of your food nowadays.