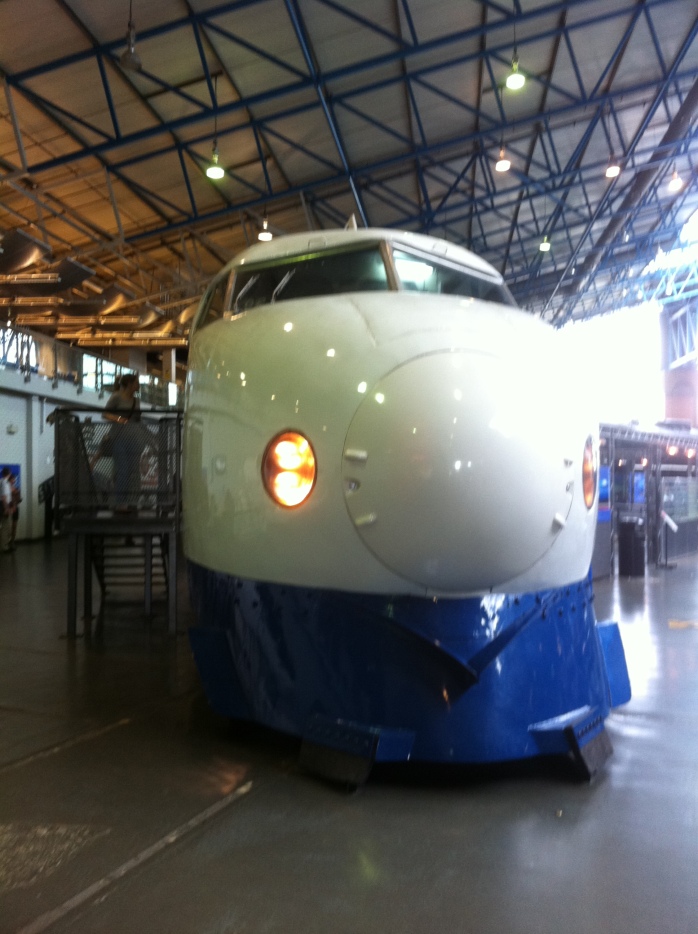 Looking at the Shinkansen Japanese Bullet Train during a visit to the National Railway Museum in York in June, I wondered if such a high-speed service was any nearer in England. The new version of the train runs at speeds of up to 200mph in Japan. The original track opened in 1964 between Tokyo and Osaka and is the world’s busiest high-speed line. 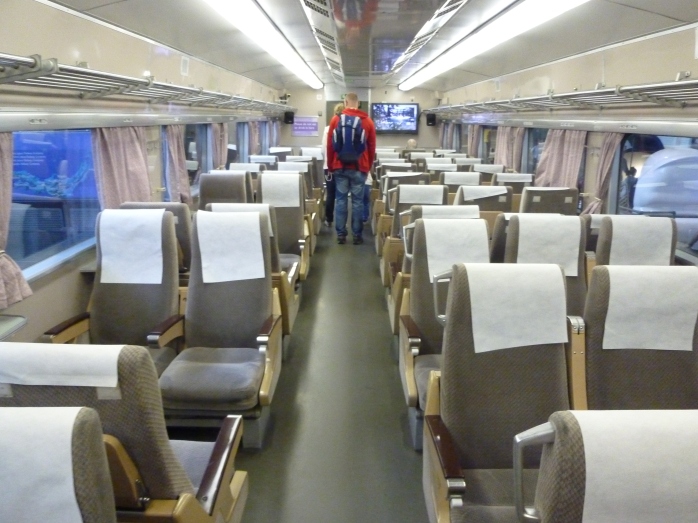 This is a “series O” train – serial number 22-141 – and was the first vehicle built and run outside the UK to be part of the museum’s collection. It began service in 1976 and was mothballed in October 2000 after more than 20 years of service on the 320-mile Tokyo to Osaka route. It was delivered to the NRM in June 2001. 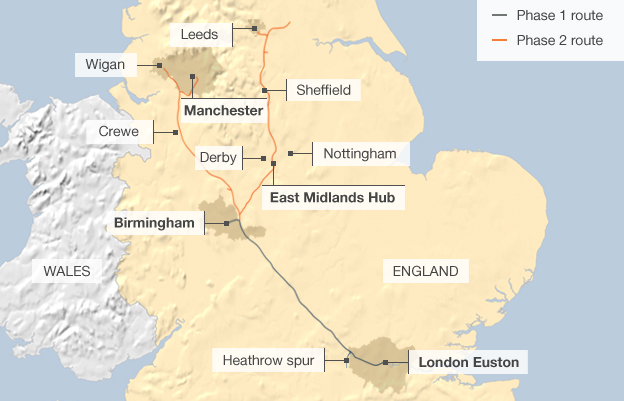 Now the British government is planning a high-speed line in England HS2 which will initially run from London to Birmingham in a journey tie of less than 50 minutes, compared to the 75 minutes it currently takes from London Euston to Birmingham International on a Pendelino inter city express run by Virgin Trains. The initial plan is for a new line between London and the West Midlands, carrying 400m-long (1,300ft) trains, with up to 1,100 seats per train. They would operate at speeds of up to 250mph – faster than any current operating speed in Europe – and would travel up to fourteen times per hour in each direction.

There would be a second phase: a V-shaped route taking services from Birmingham to Manchester and Leeds. Intermediate stations in the East Midlands and South Yorkshire are also planned (BBC News).

A new report by accountants KPMG says the HS2 rail project could boost the British economy by £15bn a year, with regions outside the capital being the biggest beneficiaries. But it says the economic boost will not be felt until 2037. Transport Secretary Patrick McLoughlin presented the findings as he made the case for the new rail line.

My interest in trains is largely owing to this locomotive: a Southern Railway Bulleid Q1-class No. C1 (33001). Known by their nick-name of Charlies or ‘Coffee Pots’, this class was designed as a wartime economy locomotive by Oliver Bulleid, making use of already existing patterns for many of their parts, as goods locomotives intended only for a short life. Although the same weight as the Q-class, their predecessors, they were 50 per-cent more powerful, and proved to be fine machines, lasting much longer than originally intended. Considered ugly by some, they are very popular with enthusiasts. The locomotive had two cylinders with Stephenson link outside admission piston valves, and was provided with a five-nozzle blast-pipe. It represents the final version of the goods 0-6-0 development on the Southern Railway (and for that matter, in the world) which can be traced through the examples preserved on the Bluebell Railway of the SER “O1”, through the SECR “C” and SR “Q” classes.

Withdrawals began in 1963, during the implementation of the British Rail modernisation plan, which saw the end of steam operations on Britain’s railways, the last example of the Q1 class being withdrawn in 1966. C1 is the sole survivor and was restored to working order by the Bluebell Railway in Sussex on two separate occasions under successive agreements with the National Railway Museum in York, where it is now on display and where I was delighted to come across it during a visit in June.

Given my interest in railways which was developed at an early age in London, it was only natural that when I saw a poster for a model railway exhibition in Dún Laoghaire at the weekend that I should explore what was on display in the concourse of County Hall. There were some very interesting layouts including one made from Lego bricks.

Visitors were asked by the Model Railway Society of Ireland to vote for their favourite display. I’m not sure who won top prize. But my vote went to stand number five, where onlookers were given a flavour of what O’Connell Street, the main thoroughfare of Dublin, looked like sixty or more years ago in the 1940s.

Nelson Pillar was the transport hub and trams used to set off from here to various parts of the city. The layout included cars, vans, pedestrians and even cyclists. To get an idea of the display I recommend this short vimeo by Brian Durcan.  The High Definition version is available here. Altogether there were fifteen layouts on show, including some from Northern Ireland.

O’Connell  Street: This layout is a 4mm scale (1:76) representation of the capital’s main street and its trams as it was in the last year  of tramway operated in 1949. The buildings on the west side of  the street were modelled using ordnance survey maps and photographs of the period. The civic monuments including the Nelson Pillar grace the centre of  the street. Many figures of people in  the  model including cyclists, horse  transport and “internal combustion engine vehicles” sharing space with working trams, busses and trucks. 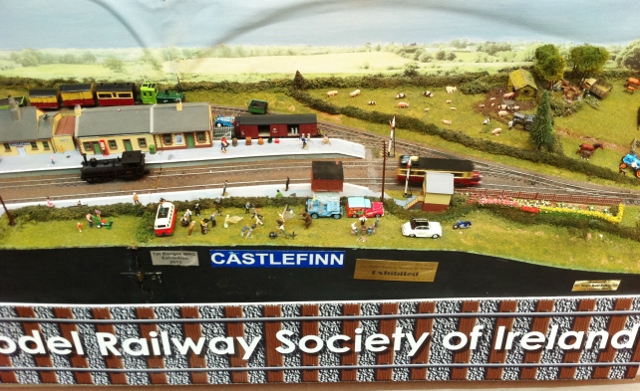 Castlefinn:  Built  by one of the MRSI members this is a OO9 gauge layout of Castlefinn station in County Donegal, on the  Donegal narrow  gauge railway  line. It shows Castlefinn as it would be today if it were reopened by a  preservation  society. The railcar is similar to one operated by the Clogher Valley Railway. At the exhibition I was able to purchase a copy of Edward Patterson’s book on the CVR.

Other Layouts/Displays: Letterkenny Station  – Donegal Railway Heritage Centre. For details of their museum at the old station house in Donegal town, see here.

75 years ago today, Mallard set a new record. The A4 Class steam locomotives broke the world speed record for steam on July 3rd 1938 by travelling at 126mph (203km/h) at Stoke Bank near Grantham in Lincolnshire. To mark the occasion a special “Gathering” of the six surviving engines in the class has been organised by the National Railway Museum in York which I visited last month. It’s the first time the six surviving engines, Dwight D Eisenhower, Mallard, Bittern, Union of South Africa, Dominion of Canada and Sir Nigel Gresley  have been seen together.

It was a huge undertaking for the organisers. with Dwight D Eisenhower and Dominion of Canada having to be shipped from North America for the event. Bittern travelled from London King’s Cross under its own steam on Saturday in a 90mph (145km/h) run up the East Coast Mainline to York. Mallard ran on the East Coast Mainline from the 1930s to the 1960s and on the historic day in 1938 was driven by the late Joe Duddington from Doncaster.

The A4 Class was designed by Sir Nigel Gresley, who also created the Flying Scotsman. Mallard was thought to have been chosen for the record-breaking run because it was one of the newest locomotives and Sir Nigel wanted to test its new performance exhaust. The locomotive broke down soon after it reached the top speed and was brought back to the workshop to have a bearing replaced. 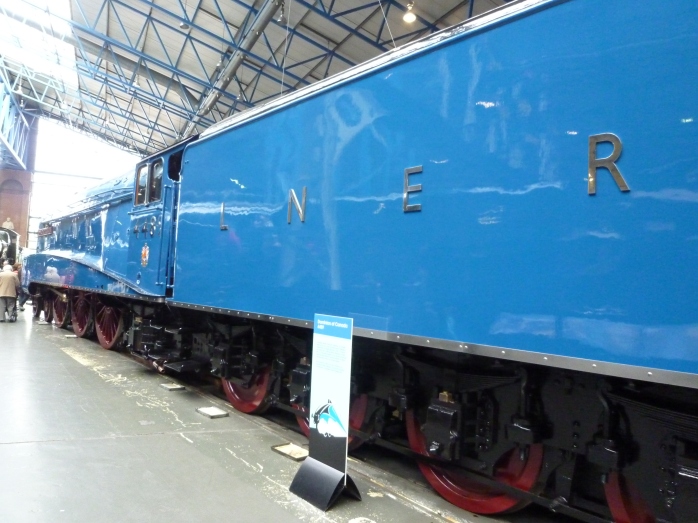 A golden plaque on the side of Mallard reads: “On July 3rd 1938 this locomotive attained a world speed record for steam traction of 126 miles per hour.”

British Rail’s modernisation plan began sweeping steam away in 1955 and Mallard was withdrawn from service in 1963. The engine was restored by the National Railway Museum in the mid-1980s.

Saw Mallard at the National Railway Museum in York. A steam engine I remember from my youth, though its record-breaking run was in 1938. On 3rd July 1938, the A4 class locomotive designed by Sir Nigel Gresley raced down Stoke Bank at 126mph to set a new steam locomotive world speed record, which still stands. This year the Museum is marking the 75th anniversary of Mallard’s achievement with a series of commemorative events, including three special opportunities to see the record breaker united with its five surviving sister locomotives: a family reunion on an international scale. Only six of the 35 A4 locomotives built survive and two of them have been temporarily repatriated from their home museums in Canada and the US. At the moment, visitors can see the cosmetically restored Dwight D Eisenhower and Dominion of Canada alongside Mallard in the Great Hall at York.

The Museum does not charge for admission and its future is according to The Press in York under threat because of budget cutbacks in the Science Museum Group. Over the weekend, a rally was held at the Museum to keep it open. So please do what you can to support this important part of our industrial heritage, begun by George Stephenson and his “Rocket”. The Museum is currently in the process of restoring The Flying Scotsman and it is hoped to have it back on the rails hauling heritage steam trips in 2015.