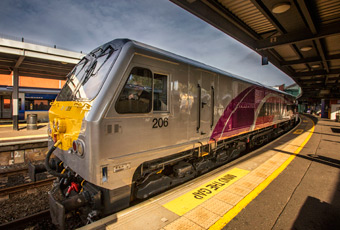 The refurbished Enterprise train was taken off the Belfast to Dublin service owing to safety concerns about its doors. The doors are reported to have opened on two occasions when the cross-border train was still moving.

The first of the newly-refurbished Enterprise fleet went into service on the Belfast to Dublin line in November. The £12.2m upgrade programme included an extensive safety approval process but issues around the doors saw the first train removed from service.

Update: On Wednesday (13th January) Translink said a detailed technical investigation and review of the door mechanisms by its engineering team, specialist door contractors and the train door manufacturer had been carried out and the train was now back in service.

Ian Campbell, General Manager, Engineering with Translink explained: “When these incidents occurred, all the appropriate safety and operational procedures were carried out. We immediately addressed the issue, removed the train from service and reported the event to the relevant safety authorities.  “We would strongly reassure our passengers and the wider public that there was no imminent danger for our customers travelling on board as a result of these two unrelated door faults.”

In light of the door faults, the Railway Safety Commission had banned the trains from operating in the Republic. Translink said it had satisfied the Irish rail authority’s concerns and the upgraded train would be returned into service.

“We will continue to collaborate with the Railway Safety Commission as we work to bring this significant Enterprise train refurbishment programme to fruition which will ultimately provide a much enhanced quality of service to passengers travelling on this important cross border route,” they concluded. The RSC said it had finished a review of evidence submitted by NI Railways and was satisfied that the circumstances which gave rise to the prohibition notice had been remedied.

A news release in September 2015 from the Special EU Programmes Body said the first newly refurbished Enterprise train had entered the ‘testing and commissioning phase’ of Translink NI Railways’ train upgrade programme which has received £12.2 million funding from the EU’s INTERREG IVA Programme. The major service overhaul will improve the cross-border rail experience for customers travelling between Belfast and Dublin as well as ensure the long-term reliability of the service for the next 10 years.

The refurbishment programme has been financed through the European Union’s INTERREG IVA Programme managed by the Special EU Programmes Body (SEUPB) with support from the Department of Regional Development and the Department of Transport, Tourism and Sport (DTTAS) in Ireland.

Chris Conway, Translink Group Chief Executive, said: “The project continues to progress well as we enter this important ‘testing and commissioning’ phase in which this first fully refurbished train will be checked to ensure it complies with all necessary safety regulations and technical specifications. This will include ‘on-track’ testing of important new features such as passenger information systems, seat reservation systems and CCTV, as well as ensuring the reliability of all the train’s management systems.”

“Following successful completion of this important project phase and all necessary safety approvals, the first train can then be introduced into passenger service so that our customers can enjoy an all-new Enterprise journey experience with an emphasis on comfort, service and value. We would like to thank the European Union, Department for Regional Development and the Department of Transport, Tourism and Sport in Ireland for essential funding to deliver this project.”

“We would also like to thank our customers for their continued patience and support as we work hard to complete this major rail project. We look forward to welcoming them on board their new Enterprise service and delivering passenger growth on this important route,” said Chris.

Paul Boylan, Programme Manager at the SEUPB which manages the EU’s INTERREG IVA Programme, said: “Developing cross-border transport infrastructure is a key facet in the INTERREG IVA Programme, which aims to enhance co-operation for a more sustainable cross-border region. The improvements being implemented by the Translink NI Railways train upgrade programme will bring a wide range of social and economic benefits to people living and working along the Belfast – Dublin rail corridor and we look forward to the programme’s successful completion.”

On November 17th the first refurbished Enterprise set made the journey between Belfast Central station and Dublin Connolly, passing through Newry. 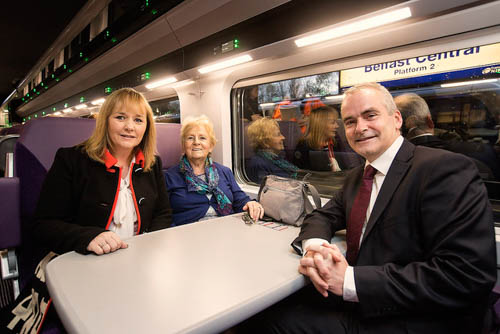 Transport Minister, Michelle McIlveen said: “The Northern Ireland Executive has invested significantly in railways and trains over the last decade with 43 new trains at a cost of around £200million in total. This has resulted in a tremendous growth in passenger numbers with a doubling of rail passengers in the last decade. Last year alone nearly 13.5million rail journeys were made in Northern Ireland.”

“I am confident that this major improvement in the Enterprise trains will encourage even more growth in rail passengers along this key strategic rail link.”

Welcoming the launch, (then) Finance Minister Arlene Foster said: “The Enterprise service between Belfast and Dublin provides an important infrastructure link for passengers travelling between the two cities. This delivery of this project, supported under the EU’s INTERREG IVA programme, will deliver social and economic benefits for citizens in both Northern Ireland and the Republic of Ireland, which will in turn contribute to economic growth and prosperity.”

Speaking at Belfast Central Station ahead of the train’s departure to Dublin Connolly Station, Translink Group Chief Executive Chris Conway said: “This is great news for our customers. The service looks and feels like a modern new train with the emphasis on comfort, service and value.”

“Customers will first notice the train’s striking modern new look with a stylish purple, red and grey livery. Stepping on board, the transformation is incredible with vibrant, eye-catching new colour schemes, attractive seating with power sockets, plush carpets, new tables and lighting. Once all trains are completed we will also have our new electronic seat reservation displays operating.”