My journey this evening took me along the N2 heading Northwards from Dublin and past a sign indicating “Ledwidge Country” outside Slane in Co. Meath. It’s a good staring point as I mentioned it at the end of yesterday’s blog about Maev Conway-Piskorski. Her mother Margaret (Maighréad Uí Chonmhidhe) had given a lecture at the folk school in Bettystown in 1966 about the poet-soldier Francis Ledwidge. I quote from the book “Seanchas na Midhe” (eds. Ní Chonmhidhe Piskorska & Brück 2009):

“Margaret Conway remembered meeting the poet when she was a young girl in Colga, when he visited her brothers and “fellow poets” at their home. Her painting of the Maiden Tower at Mornington, reproduced on the cover of this booklet, depicts a scene romantically associated with Francis Ledwidge and with Ellie, the young woman who inspired many of his poems”

Ledwidge was born in Slane in 1888 and after joining the Volunteers in 1913 enlisted in the British Army the following year in the Royal Inniskilling Fusiliers. He was killed at the battle of Ypres (Ieper) in Flanders in July 1917.

In 1982 a museum was opened by the Omagh writer Benedict Kiely in the cottage where Ledwidge was born. There is a plaque in his memory attached to the front wall of the cottage. It states that it was erected by the Slane guild of Muintir na Tíre on September 9th 1962. A copy of the plaque is set in stone at the approach to the bridge over the River Boyne at Slane.

Continuing past Slane I stopped in County Louth close to the county boundary with Monaghan, where the province of Ulster begins. I watched another Tyrone writer and journalist Martina Devlin being interviewed on the RTÉ Nationwide programme about her home town of Omagh. Talking about the education she received at Loreto primary school, she mentioned the influence of the local poet, novelist and writer, Alice Milligan, whose background is very interesting. From a Protestant family and educated at Methodist College, Belfast, she went on to become an Irish nationalist and a leading figure in the Irish literary revival, who mixed with people like Yeats, Casement and James Connolly. She edited a magazine produced in Belfast at the end of the 19thC, Shan Van Vocht and was an organiser for the Gaelic League. Born at Gortmore, outside Omagh in September 1866, she died in April 1953 and is buried in the Church of Ireland cemetery at Drumragh.

While researching William Carleton in the UCD Archive I found a number of letters from Alice Milligan then living at University Road Belfast (near Queen’s University) written to the biographer DJ O’Donoghue (librarian at University College). One of the letters enclosed five poems (LA15/1149). She also agrees to contribute to the Mangan memorial fund, a project which O’Donoghue was working on with George Sigerson to provide a memorial to the poet at St Stephen’s Green. The photo of the two men chatting about the Mangan project is copyright © IVRLA  (Irish Virtual Research Library and Archive)  and is reproduced with the kind permission of Professor Helen Solterer  from an original in  UCD Library Special Collections. The bust of James Clarence Mangan can be seen if you are walking through St Stephen’s Green not far from Newman House and near the middle of the park. 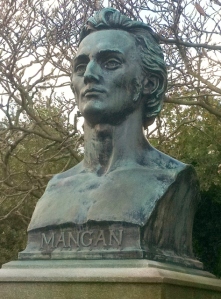 UPDATE: Thanks to Charles Fitzgerald for having read the above and sending in the following quotation from a Ledwidge poem (Ceol Sidhe):

“And many a little whispering thingIs calling the Shee.The dewy bells of evening ring,And all is melody”.

The poem and other works by Ledwidge can be found here.

2 thoughts on “FROM SLANE TO OMAGH”