The words “Monaghan” and “hurling” don’t sit naturally together. Monaghan is a footballing county, although the Farney men have never succeeded in winning the Sam Maguire Cup. But after this evening’s result in the Allianz National League, when Monaghan were defeated by neighbours Cavan at Breffni Park, perhaps the time has come for a change! If you look closely enough at the reflection in the silver of the cup, you can see how I managed to include the Tipperary colours of my tie in the picture!

This afternoon during a visit to my mother-in-law in Castleblayney, which is also my mother’s home town, I was pleased to get an opportunity to see the spoils of Kilkenny’s hurling victories. There was the Liam McCarthy Cup, presented to the All-Ireland senior champions. Alongside it was the Dr Croke Cup, the trophy for the National Hurling League champions of 2012, having defeated Cork in the final (www.gaa.ie report). 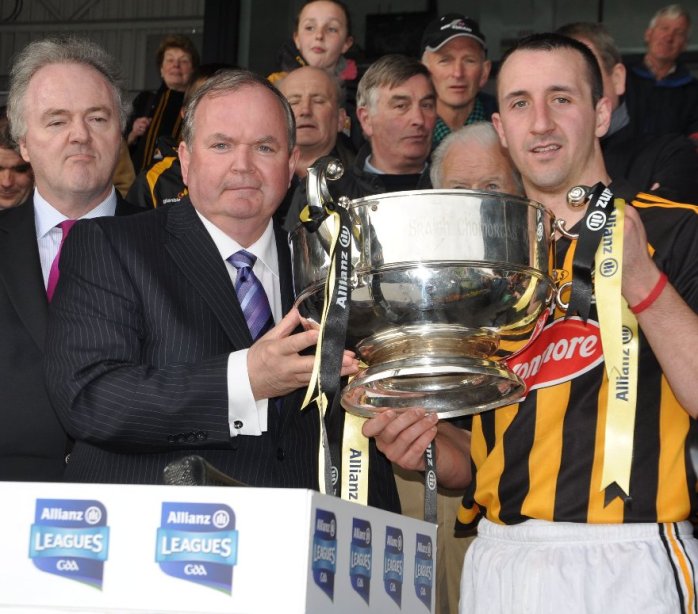 The trophies came to Castleblayney in the custody of Kilkenny kit manager Denis “Rackard” Cody, an important member of the county’s backroom team. I did not get a chance to ask him if his nickname came from the famous Wexford hurlers! The cups were brought to Ulster with a purpose: to encourage the development of hurling at secondary school level. The under-12s and under-14s from Our Lady’s secondary school and their counterparts from East Cavan Gaels took part in a match and coaching session run by Cody.

He joined the Kilkenny set-up in 1977 and has served as kit manager for the past ten  years. He refereed 15 county finals in all grades, and officiated also at National League level. He was elected the first Mayor of Graignamanagh in 1982 (Kilkenny People). He brings his knowledge and passion for hurling around the country. In November he visited one of the cradles of hurling, the Glens of Antrim, as a guest of the Robert Emmet club in Cushendun and helped run an underage competition.

Hurling can continue to be successful in Ulster and can only benefit from the expertise of the Noresiders. Title holders Loughgiel Shamrocks from the Glens were playing this afternoon in an All-Ireland club semi-final, which ended in a draw after extra time and will have to go to a replay. I also recall walking through the grounds of UCD in Belfield, near the sports centre, when I spotted a young lad with a Monaghan GAA top…..carrying a hurley. Such a rare sight that I felt it necessary to go up to him and congratulate him on his perseverance!