The killing of Aidan McAnespie (24) at a border checkpoint outside Aughnacloy in County Tyrone 25 years ago today was one of the most controversial killings during the “troubles”.  It led to a diplomatic row between London and Dublin. At the request of Charles Haughey’s government, Deputy Garda Commissioner Eugene Crowley was sent to Monaghan to investigate, although his report was never made public. Prime Minister Margaret Thatcher said the Irish government could investigate anything it wished, but not North of the border.

Grenadier Guardsman David Holden claimed his hands were wet after cleaning the sangar in the watchtower and that he had accidentally fired three rounds from a heavy machine gun as he moved it. Three days after the shooting Guardsman Holden appeared at Cookstown magistrates court where he was charged with the unlawful killing of Mr McAnespie. The same day, Irish and British Ministers held an Anglo-Irish conference in Dublin. 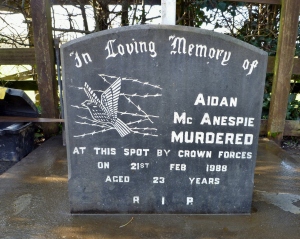 I remember seeing the soldier standing in the dock as the charge was put to him. His lawyer said he would plead innocent to the charge. The magistrate remanded him into police custody. The charge was withdrawn six months later after a decision by the Director of Public Prosecutions on the basis that in his judgement there was insufficient evidence to sustain it.

Twenty years after the killing, a PSNI Historical Enquiries Team report concluded that the soldier’s account of events that the fatal shot which hit Aidan in the back was “a tragic accident” was the least likely explanation of what had occurred. The report said that:-

“an impartial and independent observer must question the likelihood of an accidental random discharge striking the roadway only a few feet behind what would be from the vantage point of the machine gun post a miniscule figure at a distance of 283.4 meters. The statistical odds, as outlined by (an) independent ballistic expert…..are strongly against the accidental discharge theory.”

This finding in October 2008 brought huge relief to the McAnespie family. His niece Una McCabe said the claim that Aidan had been killed by a ricochet bullet fired at random because a soldier had wet slippy fingers which inadvertently came in contact with the trigger and that Aidan was not being tracked at that precise moment had been firmly rebutted. She said the official scenario, as accepted by the British Army and the prosecution service, could be regarded as so remote that it could be virtually disregarded.

The memory of Aidan lives on. Tonight the former Tyrone football star and current Fermanagh manager Peter Canavan will be in Aughnacloy to address a candlelit vigil near the spot where Aidan died. Alongside the road where he was killed, there is a small stone memorial and a cross, which has been freshly painted. This evening a crowd will assemble beside the site of the former lookout post, which dominated the main  road to Dublin. 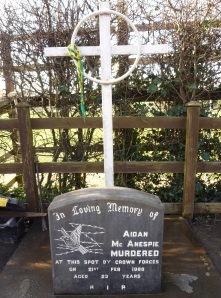 Speaking ahead of the event, Peter Canavan said the killing of Aidan had sent huge shock waves around the country. He said the GAA community, particularly in counties Tyrone and Monaghan, had been stunned that one of its members had been callously cut down following what he said had been years of threats and torment by the British army.

Outside the McAnespie house in Aughnacloy flies the flag of the largest GAA Club in Boston in the United States. It is named after Aidan, a sign of how his death took on international significance. His mother Elizabeth and his sister Eilish have now passed away. But his father John remembers how in the few months before the incident, his wife always used to walk with Aidan to and from the security checkpoint, when he was going to work in Monaghan, or returning. He said Aidan always used to park his car beyond the watchtower, close to the GAA Club, because of the continual harassment he used to get from soldiers, who tracked his movements. A year before the incident, John McAnespie was stopped by a British soldier at the checkpoint, who told him: “We have a bullet here (in the gun) for him”.

On that day on Sunday February 21st  1988 the Aghaloo Gaelic football team from Aughnacloy, whose pitch is alongside the main road and close to the border with County Monaghan was due to play Killeeshil. Aidan had been walking past the checkpoint and was on his way to the club when he was killed. To mark the anniversary a number of Aghaloo and Killeeshil players from that era, with others, will line out on Saturday 23rd February at 4.00pm to compete for the Aidan McAnespie Trophy. The event will be attended by leading GAA personalities and officials, including Tyrone County Chair Ciaran McLaughlin, Ulster GAA Secretary Danny Murphy and the former GAA President, Dr Mick Loftus from Mayo. 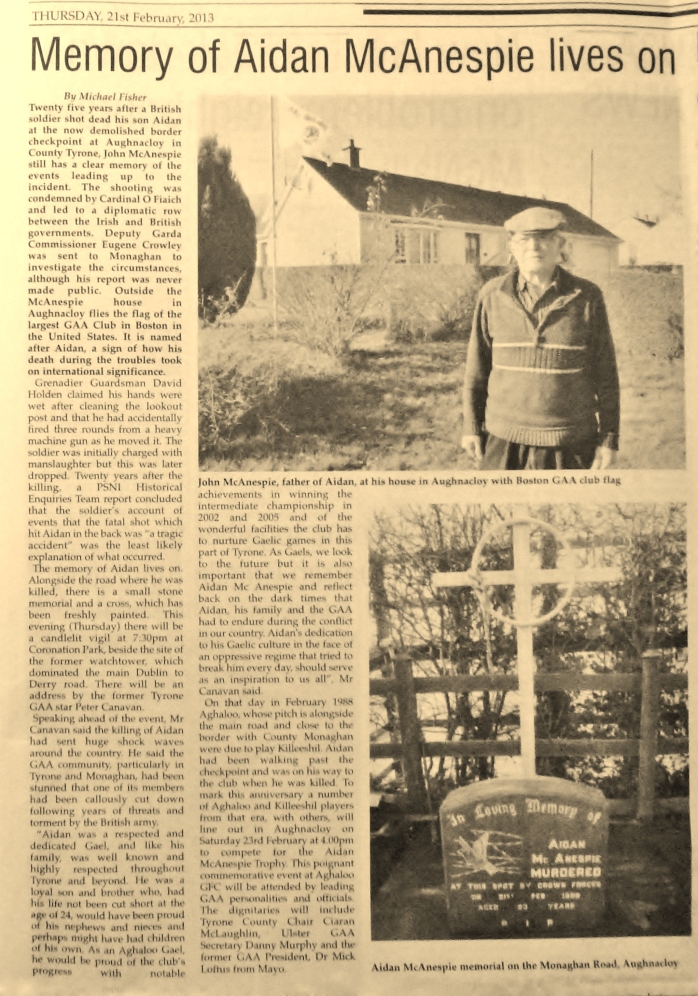 One thought on “AIDAN McANESPIE”