The statue of Saint Patrick at the Sacred Heart Church in Kilburn, London, stands as a reminder of the large Irish community who used to worship here. The chapel at Quex Road was built in 1878/9 and there had been an Irish presence in the area since 1841. In the 1950s and 60s there was an influx of Irish labourers as the suburb was redeveloped, and it became known as Ireland’s 33rd county. But the Irish nature of the parish has now diminished, following the arrival of immigrants from the Indian subcontinent and elsewhere.

The parish is run by the Oblates of Mary Immaculate (OMI) and the parish priest is from Waterford. But his assistants are from areas as diverse as Sri Lanka, the Congo and the Philippines, along with one local man from Willesden, who was ordained in Ireland.

The priest from the Congo said the Mass I was at on Sunday morning. The three servers he had on the altar (two of them girls) were coloured and I noticed only a few people in the congregation who seemed to be Irish or were of Irish extraction. But on Sunday March 17th there will be celebrations for the feast of St Patrick. 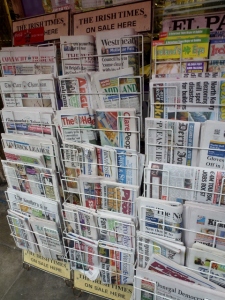 Go out onto the nearby Kilburn High Road and you will still see an Irish influence. Not far from the former State cinema that once house the National Ballroom, I came across a newsagents shop, with a wide selection of Irish provincial newspapers for sale. The last time I saw such a selection was in Easons in Dublin. I was disappointed that among the papers missing were the Northern Standard (Monaghan), the Anglo-Celt (Cavan) and the (Carlow) Nationalist and Leinster Times.  But I’m sure if you went in and asked for any of the other titles, the newsagent would probably order them for you.

Many of the Irish emigrants who came to London never got the chance to return home. There are still some who are living on their own, who were never married and who have lost touch with Ireland. To provide accommodation for them, the Irish Centre Housing (ICH) group has developed a new hostel, close to the Sacred Heart church. 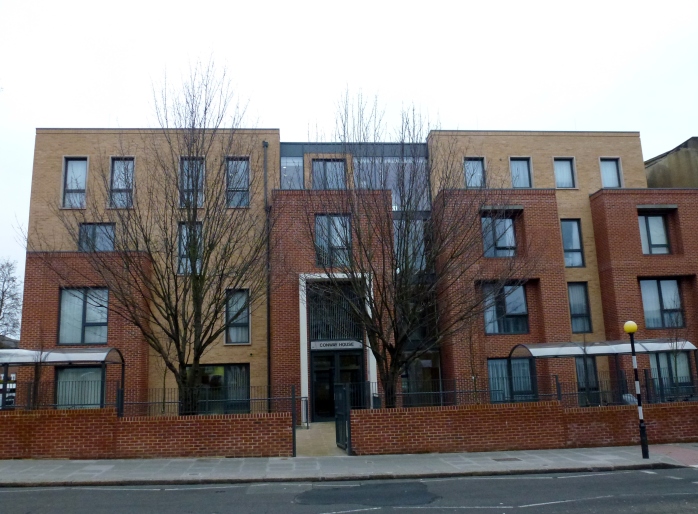 Conway House was originally the site of a nursing home, acquired from the Sisters of Hope in 1973. The new building costing £4 million contains 60 en-suite rooms for single people. There is an annexe with six flats for renting for family acommodation. The first new residents moved in two months ago at the start of December.  ICH provides accommodation and support for the homeless and those with alcohol, drug and mental health issues, as well as affordable housing for those on local authority waiting lists. The development was financed through Clydesdale Bank and was carried out in association with the London Borough of Camden’s Hostels Pathway project.