A big night in London tonight for Terry Cavanagh from Tydavnet in County Monaghan, developer of Super Hexagon. It was in the running for a BAFTA video games award in the Best British game category. Terry is based in Cambridge and his parents were with him at the finals at the Hilton Hotel in the West End. Dara O Briain was compere. Here’s how The Guardian described the ceremony:-

Now it’s time to turn to the award for British game. Not the game that best embodies Britishness (croquet? cricket? cluedo?) but the best game made by a Brit. A difficult award to judge this. The nominees are:

·  Forza Horizon ·  LEGO: The Lord of the Rings ·  Need for Speed Most Wanted · (these three are “hefty multiplatform blockbusters” according to the blog)

· Dear Esther · The Room ·  Super Hexagon (Terry’s game is among three independent creations, self-funded by their developers). These two different groups “exemplify the current tussle at the creative and commercial heart of the industry”, says the Guardian video games journalist, Simon Parkin.

And the winner is: The Room, an iOS puzzle game that’s heavy on atmosphere and light on scarves.

The game, according to a BBC report, challenges players to solve puzzles in a 3D environment in order to reveal the secrets of a mysterious box. It was created by Guildford-based Fireproof Studios and had previously won Apple’s 2012 iPad game of the year.

Well done Terry, who no doubt might disagree strongly with that description of the category namely “the best game made by a Brit”!!

For a full list of the nominations in the nineteen categories, you can go to the BAFTA website here. The Best Game award went to Dishonored, as the BBC News technology section reports. This was the fifth year O’Briain acted as master of ceremonies. The Guardian said he took to the stage and opened his remarks “by expressing his dismay at continually being asked to defend video games in the role of ‘token’ game playing celebrity”. 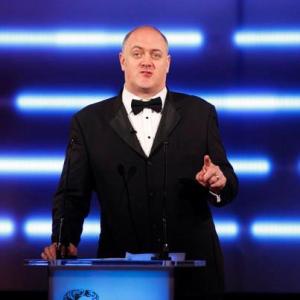