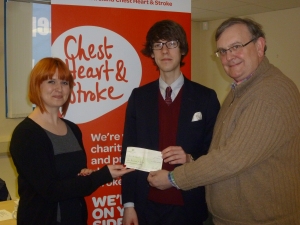 For the past four years, the National Union of Journalists in Northern Ireland in association with the BBC and Chest, Heart and Stroke has run a bursary scheme for young journalists in memory of Paul Robinson. Paul was a producer in the BBC and NUJ member,who died in February 2009 of heart-related problems. In his memory, the BBC and NUJ jointly fund a £1,000 bursary for a journalism student in Northern Ireland. The BBC also offers a two weeks work experience placement to the winner.

This year the bursary was won by Iain McDowell from Rathfriland in County Down. His winning entry was an audio package entitled “Battling Stress: Letitia’s Story“. Former BBC and UTV journalist Letitia Fitzpatrick talked about her struggle with stress in this report into one of the biggest mental health problems in the UK. In the opinion of the two judges, it was skilfully produced. There was good content throughout and the package was well constructed and a good story, well told. The mixes of background sound were good, with decent editing and the right level of noise to ensure it was not intrusive.

Áine O’Doherty from the North West Regional College was commended for her video entry “Old Library Trust Healthy Living Centre” in the Creggan area of Derry. The judges are David Lynas of the BBC and myself, pictured above presenting an NUJ cheque for £500 to Iain along with Vanessa Elder of CHS at our branch meeting in Belfast. 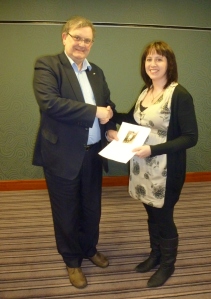 The competition was open to all NVQ Level 4 students in journalism and journalism degrees students in Northern Ireland. Previous winners include Lisa Nelson (2012 for her online entry) now with the NCTJ Journalism Diversity Fund, Dean McLaughlin of the North West Regional College for a video report (2011) and David Thompson (2010) of the Universiy of Ulster at Coleraine for his audio package “Raymond’s Story“.