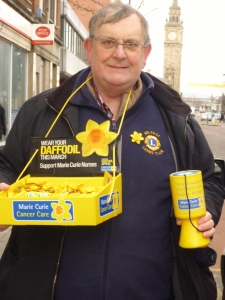 Five years ago on Good Friday, one of our neighbours in Belfast lost her battle with cancer and passed away. Liz Reid was 49 when she died in the care of the Marie Curie staff at the hospice in Knock. Her husband John later praised the outstanding work done by the care teams. To thank them for the support given to Liz during her last months, John helped to raise funds for Marie Curie by taking part in events such as the Belfast Marathon with his family. John is a well-known architect in Belfast and another project he helped to organise for the charity was a Titanic-themed dinner in the former Harland and Wolff drawing offices.

John was also interviewed for a video which Marie Curie fundraiser Grace Smyth showed to members of Belfast Lions Club at their monthly meeting at the start of March. So it was very appropriate that this morning myself and my wife, a former Marie Curie home care nurse, joined a few dozen people in Belfast city centre to help collect for the annual daffodil appeal.

A working agreement was reached in November last year by Marie Curie and the Lions Clubs multiple district for Lions in Britain and Northern Ireland to assist with the Great Daffodil Appeal. Marie Curie do great work, particularly at the hospice in Knock in the East of the city. I hope if you saw anyone collecting in Belfast or elsewhere, you were able to give your support. Thank you. More details of the collection and the charity can be found here. 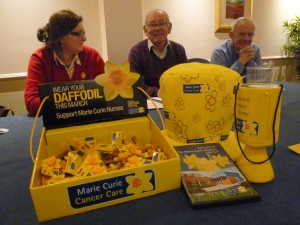