A day for reflection and enjoyment in the company of family, so I will not venture into any lengthy diatribe today. It was my mother’s 93rd birthday, which she celebrated at home in Dublin. Meanwhile I was attending a birthday celebration in Monaghan for my first daughter, who had invited around her cousins, aunts and uncles. We were also fortunate to have our second daughter return home from London on an Easter break.

I attended Easter Sunday Mass at Saint Macartan’s Cathedral in Monaghan and there was a large attendance at the lunchtime service. I reflected on how my grandparents (on my mother’s side) would have attended the major liturgical events here sixty years ago and more. Since they lived at Tirkeenan beside the entrance to the Cathedral, they were frequent attenders at Mass, as my grandfather’s diaries from the time recorded.

I then took the opportunity to visit the graveyard at Latlurcan, where I had attended two funerals earlier this month. My aunt Marie and her husband and my uncle Finbarr Smyth are buried there. Finbarr died in an air crash in the Isle of Wight when I was five and living in London in November 1957. He had been flying out to Madeira on a holiday with Cosmo Meldrum, a friend from Sligo, where he was manager of the Yeats Country Hotel at Rosses Point. The Aquila Airways Short Solent flying boat G-AKNU (pictured here at Funchal Bay) crashed shortly after take-off at Southampton docks. 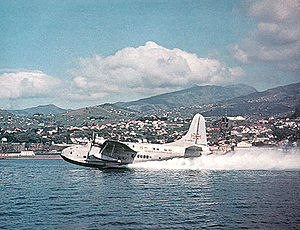 During a holiday in Madeira in 2011 I discovered more details about the airline and the planes it used since 1949 to bring holidaymakers to the island, as it developed a tourist industry. There was a small exhibition about the flying boats beside the shop at the Madeira Story Centre museum in Funchal. Upstairs there was also a display that included a mock-up of part of the aircraft’s cabin, including the roof racks used to store luggage. Black-and-white archive film played on small monitors showing the planes taking off. It was an emotional experience. I notice that there is now a plaque at St Mary’s church in Brook, close to Chessel Down, containing the names of all those who died in the crash. At some stage I will go to visit it.

45 people died in the crash, seven of them members of the crew. May they rest in peace. Thirteen people managed to survive, among them a former British Army officer Major PW Colan, from Cloyne in County Cork. British commercial flying-boat operations ceased ten months later on 30th September 1958 when Aquila Airways withdrew its Madeira service. The flying boats for passenger traffic were a variation of the Sunderlands which provided important service from Lough Erne and other RAF bases in the Second World War. They were built by Short Brothers and Harland in Belfast.