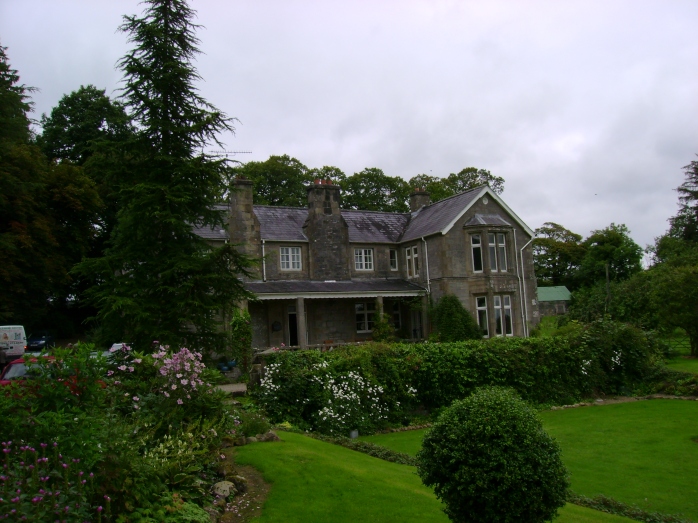 The story of Mullaghmore House in the parish of  Tydavnet, County Monaghan and the Rose estate yesterday gave only a brief mention to one of its most interesting landlords, Gertrude Rose. If anyone can provide a picture of her, I will add it to the blog. (This image has been sourced by Grace Moloney of the Clogher Historical Society and it is from a catalogue published by Dreweatts Auctions in England: added 29th May 2013).

I have found a picture of the Anglican clergyman who was her friend and adviser, Frederick Temple, who went on to become Archbishop of Canterbury. What we did get at the very interesting talk at Cornagilta school on Thursday evening, courtesy of Patsy Brady, was a copy of an obituary from, I think, The Northern Standard in January 1907. I am reproducing it here, to give some idea of the background of this progressive and forward-thinking landlord:-

“A gentleman who was for many years an intimate personal friend of Miss Rose, of Mullaghmore, whose lamented death we referred to in last week’s issue, has sent us the following interesting sketch:-

By the death of Miss Rose the neighbourhood of Monaghan has lost one of its most interesting inhabitants. She was a lady of many parts, of great initiative, ability, and kindness of heart, a sterling friend, and a good neighbour. She has left a void which cannot easily be filled. Coming into the property of Mullaghmore about 50 years ago, on the death of her uncle, she at once set herself to perform the duties of her position with zeal and devotion. We believe it was her first intention to sell the property, but the late Archbishop Temple, with whom she was on terms of intimate friendship, impressed upon her the duties of her position; so she retained the property and faced its duties with very high ideals which she ever kept before her and strive to realize. She was a young woman then*, and from that time, till now that she has been removed by death, she had devoted herself to the service of her people and the betterment of their condition.

Scotch by race, English by birth, French by education, she expressed the sterling qualities of each nation. She had the fixity of purpose, the unbending, uncompromising character of the one, — the ‘granite’, — (but ‘granite on fire’, as her friend Archbishop Temple** was described); the great common sense and love of justice of the other, and with this the graceful winning courtesy of the French. As soon as she came into the property, she built herself a home suitable to her position, and from that time till now, she has lived continuously amongst her people, ever influencing them, inspiring them by her example and sympathy. Improved farms, stock, tillage were brought about by her efforts, and on her ‘home-farm’, was to be seen some of the finest live stock in the north of Ireland.

But not merely in the material improvement of her tenants was Miss Rose interested. She built a large school***, and supplemented the teacher’s income, so that the children might have the benefit of a good education. In many ways was Miss Rose considerably before her time, and because of this, was likely to be misunderstood, but time has proved she was right. Around her, at Mullaghmore, she kept a large staff of employees, and on them she expended a wealth of devotion and care. Were they sick she attended them; and everything that her house contained, that would be for their good, was at their disposal. A doctor told us that 28 years ago, he first met Miss Rose. When he was a very young man, he was called upon to attend a herd(sman) in her farm yard, and by the patient’s bed-side, ministering to him, he met her. Since then the acquaintance casually made ripened into the closest friendship; and he found Miss Rose ever the same — ministering to the wants of others.

How much will her social qualities be missed. Her house was ever open; she was the essence of hospitality. The friend and associate of the very highest in the land next Royalty; the friend and patron of the poor; the valued friend of many in the neighbourhood of Monaghan. Who will understand more fully their loss by experiencing it?

Any remarks regarding Miss Rose would be imperfect that would omit noticing her intellectual capacity. She possessed mental powers of a high order. Hughly educated, she read books of a high class, and brought her mind to bear on the ethical and social problems that are agitating the thinking world of to-day. She was a delightful and instructive person to meet; and one always felt, whether one agreed with her conclusions or no, they were not formed without thought and consideration. She has gone to rest in a good old age, but we can ill spare her. It may be said of her — ‘She did her duty’.

Miss Rose was the daughter of Dr. Thomas Rose, a surgeon in the 2nd Life Guards, and she was the youngest of seven children, three of whom died in one week of diphtheria.”  (end of page)

*Gertrude Rose was 21 when she inherited the estate from her uncle in March 1849.

**Archbishop Frederick Temple, who died four years before Gertrude Rose, was Archbishop of Canterbury 1896-1902 and had been a chaplain-in-ordinary to Queen Victoria.

***the school she built was at Cornagilta, described in yesterday’s blog.